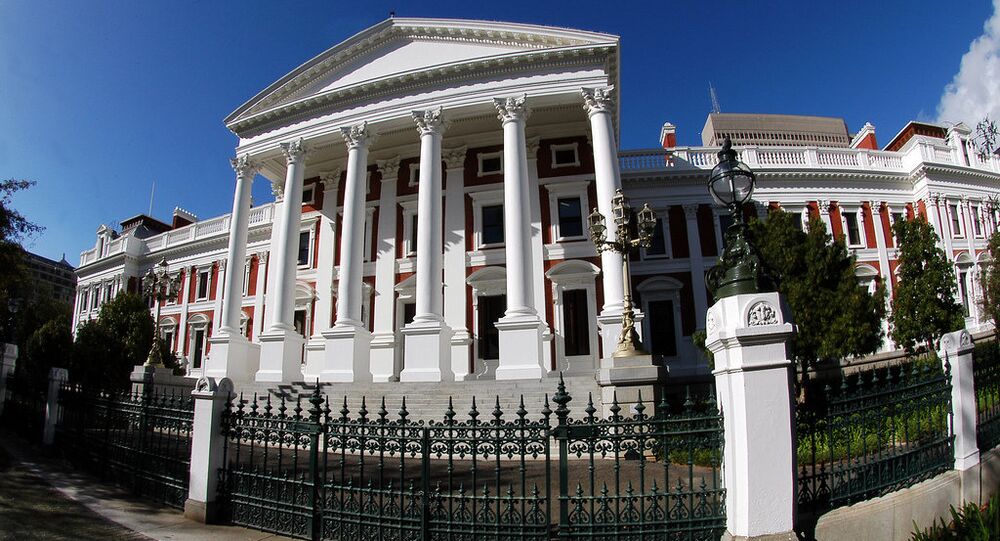 South Africa’s ruling party, the African National Congress (ANC) is pushing for land expropriation, calling property rights into question and potentially undermining the principles of the market economy in the country, under the guise of “fair” wealth redistribution rhetoric.

Kristian Rouz – South Africa's parliament adopted legislation allowing the government to perform compulsory buyouts of agricultural land “in the public's interest”, paving the way for the large-scale redistribution of assets in favor of those perceived as “disadvantaged demographic groups”.

© AFP 2021 / POOL / NIC BOTHMA
South Africa's Zuma Challenges Court Ruling to Re-Visit Corruption Charges
The move has drawn moderate criticism for potentially undermining the nation’s economic growth potential in the short-to-medium-term as the efficiency of land use is called into question.

Amid the already rife social tensions between large groups within the South African population, the economic turmoil would further exacerbate the nation’s economic struggle after the financial turbulence in late December-early January, which was accompanied by a plunge in the national currency against the US dollar.

South Africa is heavily dependent on exports of raw materials, including precious metals, and is facing yet another major economic challenge apart from the long-term decline seen in global commodity prices. The parliament has empowered the government to purchase agricultural land from its current owners against their will. The move is a play to promote the “fair” use of land, as most of South Africa’s agriculture is dependent on white British-ancestry or Afrikaner land ownership, while the government intends to redistribute it to poor blacks.

The ruling African National Congress (ANC) party said the legislation is designed to “remove the remaining injustices left as legacy of the Apartheid.” The move mirrors Robert Mugabwe's land reforms in neighboring Zimbabwe in the 1980's and 1990's, which devolved as a "willing seller, willing buyer" clause was removed from the original land purchase agreement and concluded with the forceful, violent ejection of white farmers from their land as part of the February, 2000 Fast-Track Land Reform Program.

"The passing of the bill by parliament is historic and heralds a new era of intensified land distribution program to bring long-awaited justice to the dispossessed majority of South Africans," the ANC said in a statement.

South Africa, mired in so-called “farm attacks” during the past 20 years that took lives of roughly 1,000 farmers of European descent, might see more acute outbreaks of social struggle coming. Interest groups representing farmers are firmly opposed to the bill, and concerned with protecting property rights. Investment in the nation’s agriculture would slump should the bill be enforced, they warn, not to mention the overall productivity of the industry.

A coercive redistribution of assets, along with lack of trust in property rights would fend off capital and undermine agricultural activity, while the ongoing drought remains concern.

“If this bill is accepted today, it would shock business trust and would further contribute to a junk status downgrade for South Africa. The DA rejects it,” the opposition party said.

During the past two decades roughly 20 mln acres have been transferred to non-white ownership, an equivalent of 10% of land in the hands of British-ancestry/Afrikaner farmers in 1994.

The ANC intends to increase the share of land owned by non-whites to 30%.

The DA blasted the bill as providing little clarity on land redistribution proceedings as the nation’s existing laws do not provide a comprehensive legal framework for property expropriation.

“Property” is not properly defined. The current interpretation stretches far beyond immovable assets and includes assets such as pension funds and cattle, which could potentially also be expropriated – to the detriment of many ordinary citizens,” the DA said.

Current macroeconomic conditions in South Africa are hardly encouraging. Economic growth is faltering at an annualized 0.6% amid low global commodity prices, while 8.9 mln people remain unemployed, and credit ratings downgrades loom; the Zuma government has failed to address the financial instability that hit the nation earlier this year.

President Zuma has yet to sign the Expropriation Bill into law; observers say doing so might take weeks or months, which therefore stirs speculation that the bill is being used as leverage to embolden the ANC’s bargaining power with the DA. The opposition party has been gaining popularity since the early 2010s for putting pragmatic reform in the economy and setting development-oriented goals.