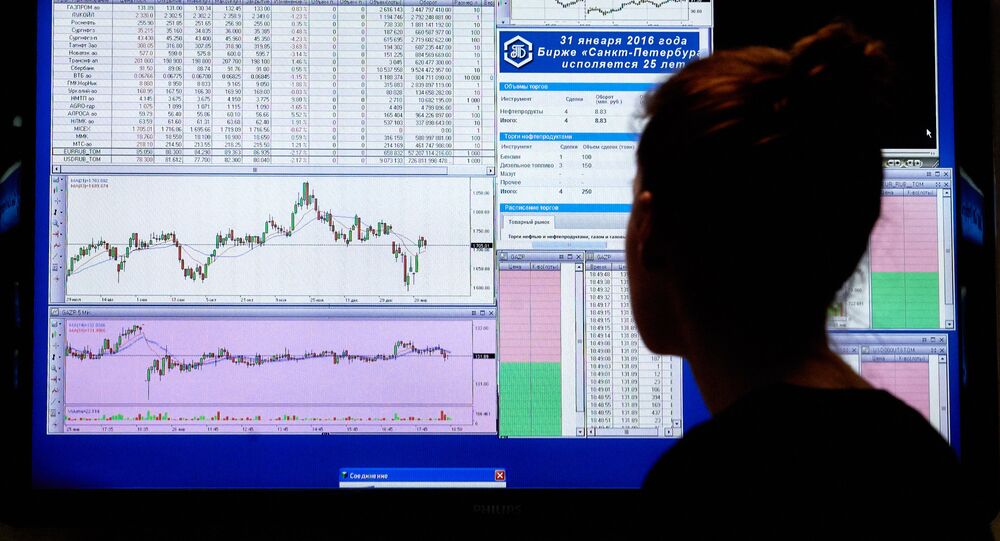 Nowhere to Go but Up: Russian Markets Post Profits Amid Oil Recovery

Global hedge funds which had invested in Russian assets have enjoyed a windfall in returns; the nation’s financial markets are improving, gaining support from higher oil prices and easing international risks.

© AFP 2021 / TIMOTHY A. CLARY
Worst is Yet to Come? US Billionaire Warns of Crisis Worse Than 2008
Kristian Rouz — Russia's financial assets outperformed other emerging markets in terms of return on investment (ROI) during the past 18 months, rewarding global hedge funds despite high volatility stemming from the choppiness in oil prices. Even though the value of Russian assets is closely tied to crude prices, two robust recoveries in the oil market, in mid-2015 and in the recent months, allowed for average ROI to increase eight times that of mainland China's assets, during the same period, despite China being the second-best performer. Subsequently, Russia's investment appeal has been steadily improving based on the economy's resilience to numerous shocks.

International hedge funds which invested in Russia's assets between early 2015 and May 2016 gained 29% in value as improvements in the oil market and the country's steady economic outlook pushed the average ROI of Russian assets higher than that in other emerging markets. Funds investing in mainland China's assets gained only 3.8% during the same period, while companies allocating capital in India added 1.8%, according to eVestment data.

© Sputnik / Aleksandr Kondratuk
The Bottom Line: Investment Analyst Claims China, OPEC Prefer Russia to Petrodollars
Russia's investment appeal is recovering robustly, which is also evidence by substantial gains in Russian stocks. The MSCI Russia Index has advanced 17% since early 2015, even though market moves in Russia have been characterized by wild and unpredictable swings between double-digit capital wipeouts and best monthly performance results during the period. The volatility in the oil market has been the principal factor behind the choppiness in value of Russia's assets and financial tools. However, the country's low national debt, at just above 15% GDP, coupled with the burden of corporate debt having eased significantly due to the 68% devaluation of the national currency, contributed to higher ROIs on most types of assets.

"There are not too many places in the world where you can get the returns you can get in Russia," Albin Rosengren of Stockholm-based East Capital Group said. "Investors were exiting Russia last year as there was a lot of market uncertainty, and they are entering Russia this year as it looks attractive. For us, Russia has been a good investment both in 2015 and 2016."

East Capital is an investment company which allocates capital in markets like Sweden, Australia, Japan, Hong Kong, Russia, the US, and New Zealand, among others. The value of assets managed by East Capital totals $2.5 bln, of which $1 bln is invested in Russia. East Capital's average ROI gained 5.5% in 2016, while their investment in Russia returned 17% during the same period.

Another reason investors are rather optimistic about the Russian financial market's perspective is that oil prices are likely to go further up, as outlined in a recent report by Goldman Sachs. The global energy market is gradually sliding towards a deficit as divestment in oil exploration and extraction have affected overall output volumes, while a moderate economic improvement in advanced nations has helped support stable demand.

"The oil market has gone from nearing storage saturation to being in deficit much earlier than we expected," Goldman analysts wrote, also having noted the market "likely shifted into deficit in May… driven by both sustained strong demand as well as sharply declining production."

© AFP 2021 / HASSAN AMMAR
Oil Wars: Saudi Arabia Wants to 'Keep Iran in the Penalty Box'
Oil output has decreased substantially among the world's major producers such as the US, Nigeria, and Venezuela, among others. In Nigeria, Exxon Mobil suffered pipeline disruptions due to sabotage, and as terrorist violence is poised to increase further, oil production in the country is increasingly exposed to the risk of a steady decline in oil exports in the medium-term.

In Venezuela, the state-run energy company PDVSA has found itself on the verge of bankruptcy, unable to service its $5 bln in debt as current oil prices remain below the breakeven level.

Subsequently, Russia's investment appeal is improving, even though the nation's economy has been in recession since 2015, with GDP poised to shrink by 1.4% this year. As political tensions ease, and Russia's economy adjusts to the changing international environment, investment funds are increasingly prone to pile their capital into Russia's assets, seeking higher ROIs amid volatility and the oil rally. Russia's financial market performance has by now bottomed out, according to the observations of analysts at Wells Fargo, JP Morgan Chase & Co., Bank of America, and UBS Group AG, as most analysts agree that the broader situation had at some point nowhere to go but up.