Earlier this month, 12 countries of the Pacific Rim, including Canada, reached an agreement on the wording and subject matter of the TPP free trade deal. The deal will cover about 40 percent of the global economy.

“The TPP has some serious dangers for Canada. Its state-company arbitration mechanism may result in us getting sued for trying to pass legislation that threatens industry profits or for having state-run programs,” Smith said. 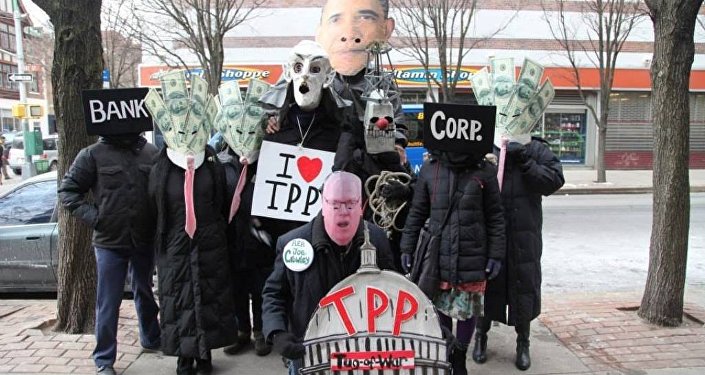 © Flickr / Stop FastTrack
Some 40 Percent of US Citizens Believe Exit From TPP Will Improve Economy
According to Smith, the country would need “strong regulators to ensure foods and goods we are importing are up to Canadian standards,” as well as to “ensure we have world-class education and infrastructure in order to maintain productivity advantages within Canada that keeps our businesses here competitive.”

There has been considerable opposition to the free trade deal from international organizations and lawmakers, who have criticized the TPP’s secrecy during negotiations, as well as its favoring of multinational corporations.

Federal elections in Canada will take place on Monday, October 19. According to the current projections by CBC’s Poll Tracker, the Liberal Party is leading with some 35 percent of support, followed by the Conservatives and the New Democratic Party (NDP) with 30 and 24 percent correspondingly. The Bloc Quebecois and the Green Party follow the frontrunners.

The Conservative party previously said that it would not sign the TPP agreement unless it was in Canada’s best interest, with Prime Minister Stephen Harper calling it “a tremendous deal.” The Liberal party criticized the Conservatives for negotiating the deal, and its head Justin Trudeau called for the full text of the accord.

NDP leader Tom Mulcair said his government would not be bound by the TPP agreement as it would hurt the Canadian families, while the Green Party head, Elizabeth May, said the deal would threaten several sectors.

“The economic policy of the new government needs to be about moving away from our dependence on unprocessed commodity sales,” Smith said.

According to Smith, the current situation on the oil markets and in the global economy shows that Canada will not be able to rely on the sale of natural goods to pay its bills as it has done in the past. The country should invest in entrepreneurs, he added.

“New innovative start-ups usually aren't making a profit that they pay taxes on at the time when they most need access to capital. That's why we propose a $1 billion dollar Green Technology Commercialization Grant fund to support our up-and-coming entrepreneurs,” Smith said.

Canada is a major exporter of crude oil and natural gas, as well as metals and wood. According to Statistics Canada data, the country’s economy is in recession. The slowdown was triggered by the global decline in oil prices, hampering Canada’s energy exports.