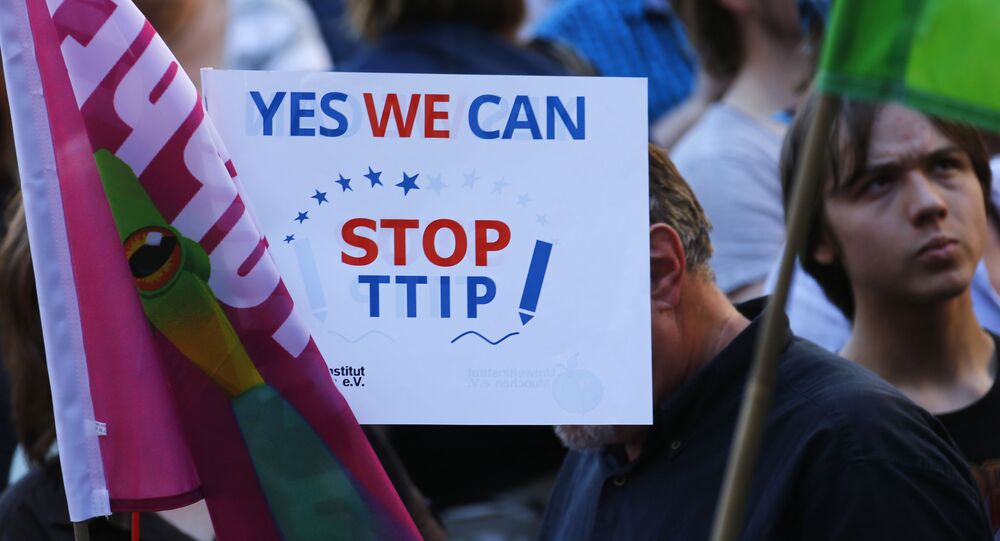 “We are ready to submit 3.26 mln signatures to European Commission,” Efler said, commenting the petition to stop negotiation TTIP.

According to the petition, the proposed deal will lead to lower environmental, consumer and employment protections.

“My basic concern is that big corporations will gain more power that leads to undermining our democracy; the bad thing in the treaty that it would give foreign cooperation’s a right to sue governments if ever their profits will be threatened by any measure of a state, so called dispute settlements,” Efler claimed.

© REUTERS / Imelda Medina
Volkswagen Scandal Undermines EU Credibility in TTIP Negotiations With US
So companies would be able to sue countries for future potential profit.

“The main threat is that foreign corporations, investors and traders can or will attack every stage of community law they want because there is no real safeguard that TTIP will protect environment for labor standards”, Efler said.

Companies would be able to sue countries through a process which would stay outside of the Federal courts.

“We have good courts in the US, Canada and Europe, We absolutely don’t need special additional courts for companies. It’s a problem and threat for the rule of law because our national courts would be overpassed by these tribunals and could be a bad development,” Efler stressed.

According to the activist, any treaty should include both rights and obligations for the parties.

“TTIP creates only rights for foreign investors and no obligations, investor can sue the state but the state cannot sue the investor,” Efler added.

© AP Photo / Matthias Schrader
German Residents Oppose TTIP Contrary to Government – German Politician
If the TTIP deal is signed, it will become largest regional free-trade agreement in history, it could also lead to a “wave of claims from American companies against EU states and other way around.”

Days after a multi-trillion dollar TPP treaty was signed in secret in America, a three million signature petition has been handed in to the European Commission in London and Brussels calling for an immediate end to negotiations on the TTIP in Europe.

Efler considered the main priority of the US is to implement the TTIP, however, the US still needs Congress to approve its ratification.