By bullying Russia and vexing China, the US is hastening the demise of the dollar's hegemony, Dr. Ron Paul underscores, adding that Moscow's patience is not infinite.

The United States is desperately trying to maintain its role as a global hegemon in the unipolar world, hoping that it will continue dictating foreign policy and shaping monetary system, while its "clients" will "dutifully carry out instructions," former Republican congressman and two-time US presidential candidate Ron Paul emphasizes.

"With the IMF's recent statement pledging its full and unconditional support to Ukraine, it has become even more clear that the IMF and other major multilateral institutions are not blindly technical organizations, but rather are totally subservient lackeys to the foreign policy agenda emanating from Washington," Dr. Ron Paul stressed.

However, although Washington has surrounded itself with its complaisant allies, the first cracks are beginning to appear in the present world order.

"The existence of Russia and China is a stark reminder" of the fact that the world is not unipolar, and it irritates Washington a lot. The US leadership behaves "like a petulant child flying into a tantrum," when Russia steps in to protect its own national interests.

© CC BY 2.0 / Bullion Vault / gold bar on coins
Dragon Rising: China's Gold Will Break World's Dependence on US Dollar
Remarkably, the existence of a country that refuses to bow to Washington's demands is viewed by the US as an "unforgivable sin."

In order to restrain Moscow the Obama administration is toughening economic sanctions against Russia. Meanwhile Washington's Western allies have even gone so far as to freeze Russian state assets in their countries, provoking justified anger from the Russian government.

"For decades, the United States has benefited as the creator and defender of the world's reserve currency, the dollar. This has enabled Americans to live beyond their means as foreign goods are imported to the US while increasingly-worthless dollars are sent abroad. But is it any wonder after 70-plus years of a depreciating dollar that the rest of the world is rebelling against this massive transfer of wealth?" the former congressman asked. 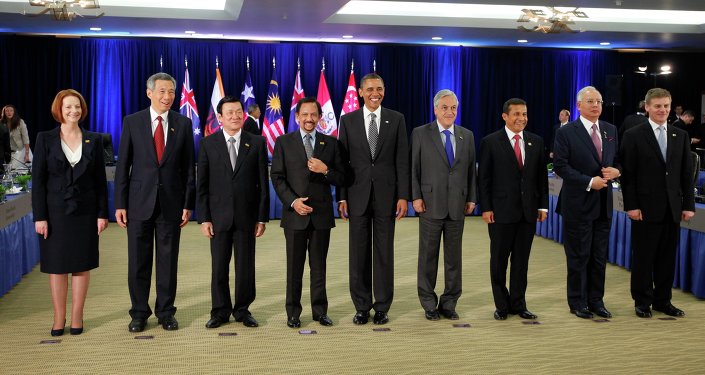 © AP Photo / Charles Dharapak
Global Trade Rules Should Be Written by US, Not China – Obama
According to Ron Paul, Moscow and Beijing pose a substantial threat to the dollar domination, since they have the opportunity and the motivation to establish "a gold-backed" monetary system, that would obviously undermine the dollar's positions.

Russia's patience is not endless, Dr. Paul warns. By bullying Russia and vexing China Washington may cut its own throat, hastening the collapse of the present world order based on the Bretton Woods monetary system.

"The end result of this needless bullying by the United States will hasten the one thing Washington fears the most: a world monetary system in which the US has no say and the dollar is relegated to playing second fiddle," the former congressman warned.

I Did Not Say That: Controversial Obama Remarks Weigh on Dollar, US Stocks