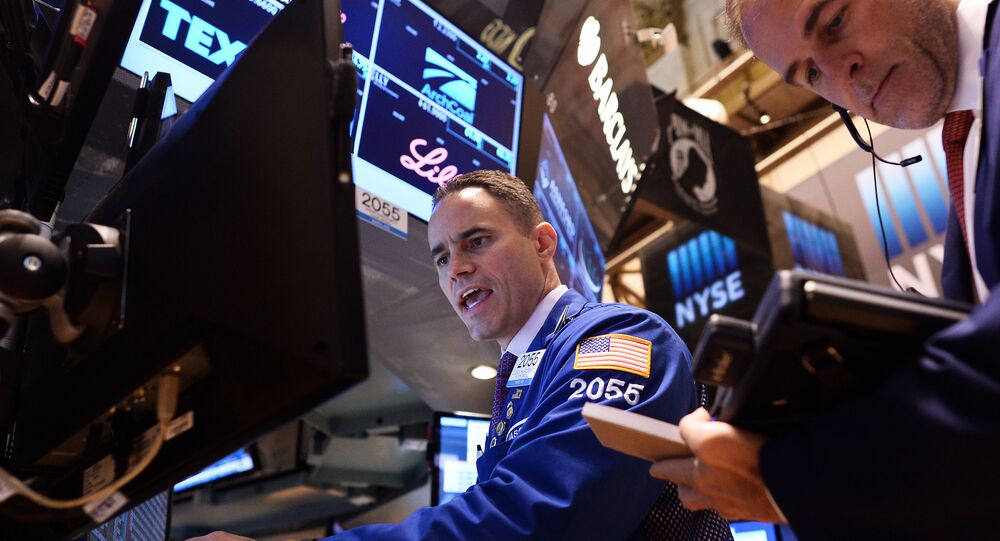 Financial volatility is on the rise globally as the gap between the bright-spot US and the gloomy China deepens, rendering markets erratic, spurring demand for ‘safe haven’ assets like US treasuries and gold.

East News/Frank Waldecker
China Partially Rebounds From Monday’s Crash; Europe, US Extend Gains
MOSCOW, January 21 (Sputnik), Kristian Rouz — Global markets are becoming increasingly volatile as growth imbalances deepen further with the US being a bright spot for the investors, while the struggling China and Eurozone are vulnerable before external and domestic shocks. However, Asia-Pacific markets have surged today reaching their six-week highs, as Wall Street edged up at the close yesterday. Bank of Japan (BOJ) decided to not expand stimulus further, pushing the yen up slightly, while the euro is on a downbound trend as the European Central Bank (ECB) is believed to start buying bonds as soon as tomorrow. Commodities advanced with crude hovering just above $48/bbl, yielding some evidence this might be round about the long-term equilibrium price, and gold edged up a bit, living up to its new role as a ‘safe haven’ for the time being.

Trading sessions in Asia-Pacific have seen a robust advance in main stocks as local industrial producers are optimistic of their trading prospects with Europe. Tomorrow’s ECB policy meeting might result in the adoption of full-scale stimulus, accelerating growth in the Eurozone, consequently driving demand for Asian-made goods in Europe.

Shanghai Shenzhen CSI 300 advanced 4.50%, almost completely making up for its Monday’s losses, Shanghai Stock Exchange rose 4.74% by 02:30 PM. Hong Kong’s Hang Seng also rebounded from Monday’s slump completely, adding 1.53% today. Korea’s KOSPI edged 0.15% up, while India’s Nifty and shares in New Zealand reached their highest on the record on the good news from the US and China, respectively.

The situation in China is not that optimistic though. Market volatility index for Shanghai Composite increased in the last 30 days to 42.3 on 19 January, the highest of the 15 major financial markets worldwide. Trading volumes in China have grown at a dangerously accelerated pace, reaching a turnover of $1.24 trln each day. As Beijing is attempting to correct the situation, investors are getting increasingly jumpy, and while sharp fluctuations like those seen on 9 December last year (-5.4%) and 19 January (-7.7%) are still manageable, risks of a larger collapse are growing as many stocks are overpriced.

The quality of mainland’s assets is another concern, as many of them are of the edge of being toxic. “For long-term investors, this is a worry. It disturbs and disrupts the picture of liquidity which is artificial and may disappear overnight,” David Gaud of Edmond de Rothschild Group in Hong Kong told Bloomberg.

© REUTERS / Aly Song
Stock Market Crash in China Biggest Since 2009, Rest of World Set to Rally
In Japan, however, the markets retreated as BOJ is reluctant to expand its monetary stimulus; as a result, the banking sector is feeling insecure with loan schemes expiring and lending conditions not getting any more attractive. The Abe government’s inflation target is also under pressure due to the low oil prices and the restart of atomic power generation industry. Nikkei lost 0.49%, Tokyo Stock Exchange retreated 0.5%. However, the Japanese financial sector is sustainably growing year-on-year.

Japan’s monetary authorities, judging by the BOJ decision to keep the current policies in place, are confident that economic growth will accelerate at a satisfactory pace, and inflation target is within reach. The nation’s exporters might be hit by a stronger yen, mucking about 118 against the dollar, however, no negative effects on manufacturing have been reported so far.

"Everyone is talking about the ECB meeting outcome," Kara Ordway of City Index in Sydney told Reuters. "Markets are choppy because there is so much uncertainty."

Markets in Europe have opened in the green territory on tomorrow’s ECB policy meeting anticipation.

Across the Atlantic, things are getting better. Wall Street is becoming even more attractive for investors, as revealed by the recent Bloomberg’s global poll. Janet Yellen, head of Federal Reserve, has been drawing more favourable feedback since July last year, and investment opportunities in the US have been improving since about July as well as the nation’s economy accelerated on the shale boom, shrinking joblessness and better productivity. US stock markets have become a ‘safe haven’ for investment.

“The U.S. will profit from flight to safety,” Wilhelm Schroeder of Schroeder Equities GmbH in Munich, Bayern, told Bloomberg.

© REUTERS / Larry Downing
Obama to Applaud Administration’s Policies That Ended US Recession
Another ‘safe haven’, namely, gold, is on the rise as well. The yellow metal hit its five-month high, appreciating to over $1,300/oz today, driven by the Chinese risks and Japan’s and European moderatism. Silver added 2% to its four-month high at $18,32/oz.

European debt is depreciating, while the US bonds are still higher-yielding and in higher demand, benefitting the third-world economies, holding these papers.

Brent crude trades at $48.41/bbl (+0.88%), still 3.6% down this week amidst oversupply. Oil prices are expected to remain low in the mid-to-long-term; looks like the petrol craze of the previous decade has finally worn out. Global economy is adjusting, and only moderate growth is now expected. The IMF projects an annualized global growth of 3.5% as cheaper energy will curb inflation – one of the main drivers of growth – in the developed world, along with the select Asian nations.