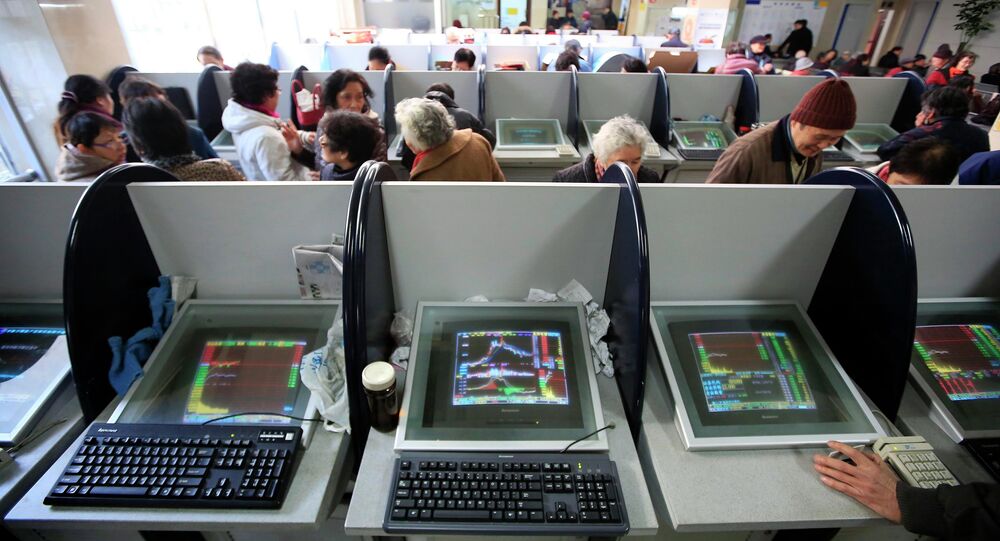 Beijing’s attempts to crackdown on speculative trading in the overheated mainland stock markets have triggered a sell-off, panic among investors and ultimately, a stock exchange crash today, triggering significant spillovers for the global economy.

© Flickr / drpavloff
Reform and Adjust or Fade Away: Global Economic Prospects for 2015
MOSCOW, January 19 (Sputnik), Kristian Rouz – The long-anticipated doom landed today as stock markets in mainland China and, to a lesser extent, in Hong Kong, experienced a sharp decline after regulatory bodies in Beijing made a conscious attempt at curbing margin trading, as they were concerned with escalating risks to the nation’s financial system. Consequently, the Chinese stock market, overvalued on cheap credit, crashed in its biggest drop since 2009, driving a global demand for safe havens among investors. Japan’s markets have grown as a result, and Europe and the US are posed for gains today on the expected influx of capital, leaving mainland China.

Akopian said that China’s securities market is currently flooded by individual investors, who are responsible for at least 70 percent of its daily turnover. Such investors are easily influenced by external trends and tend to rely on rumors, rather than on their own experience.

“Chinese regulators are trying to increase the share of ‘professional’ money and are gradually and in a controlled manner opening the market, in the hope of attracting foreign capital. At first, there will be the quality and institutional investors only,” Akopian said.

The Shanghai Shenzhen CSI 300 Index slumped 7.56% by 1 p.m several hours before the end of trading. The Shanghai Composite dropped 7.42%, Shenzhen Composite lost 3.11%, while Shenzhen Component declined by 6.68%. Hong Kong’s Hang Seng also suffered, in part due to the existence of the Stock Connect scheme with Shanghai bourses, and also in part because of the political dependence on Beijing. Asia’s flagship stock exchange lost 1.58% by 1 p.m.

The rest of Asia-Pacific gained as investors’ money rushed in Japan, Taipei and Singapore. Tokyo’s Nikkei 225 added 0.89%, TOPIX rose by 0.64%, Taiwan Stock Exchange added 0.39%, Korea’s KOSPI edged up 0.77%. Singapore’s Straits Times Index added 0.18%. However, the general sentiment in Asia-Pacific is gloomy, as mainland China has been the principal source of growth in the region due to it’s huge volumes of resources consumption. Given that, the MSCI Asia Apex 50 Index slid by 0.73%.

Despite the newly found optimism in Japan’s stock markets, the crash in China is negatively affecting the former’s economy. The yen rose 0.3% to 117.15 against the dollar on the influx of investment money in Japan, hitting exporters and adding to the deflationary pressure of cheap energy.

“The slide in Shanghai stocks is leading to yen buying,” Yuji Saito of Credit Agricole in Tokyo told Bloomberg. “With risk sentiment deteriorating right now, anything obscure will lead to reducing positions.”

© Fotolia / VRD
ECB Officials Remain at Odds on Program of Bond Purchases
Tomorrow China is releasing a report on GDP growth, and it is expected to have slowed down to 7.2% in Q4, meaning the expansion of mainland’s economy in 2014 fell short of the government target of 7.5%, the lowest since 1990. China’s stock markets are likely to shrink further if such allegations are confirmed.

In Europe, the Swiss franc slid against 16 major currencies, easing concerns of the capital flight from the Eurozone. The franc retreated 0.9% to 0.8662 against the dollar after it skyrocketed by 21% on January 15. A scheduled policy meeting of the European Central Bank (ECB) is due Thursday, and most investors are still almost certain the regulator will launch a stimulus program of sorts, though the recent developments in Asia-Pacific will yield some moderate optimism in Europe; the hawks in Brussels might be adamant in their push for the reform as well.  The possible ECB stimulus is speculated to be limited in its initial scale to 500 bln euros, small in scale for the struggling nations of the Mediterranean to be satisfied and for the investors to change their attitude to the Eurozone radically.

Some observers believe the ECB will not directly buy Eurobonds at first, rather providing only credit guarantees to the nations in need in total volume not exceeding 3 trln euros.