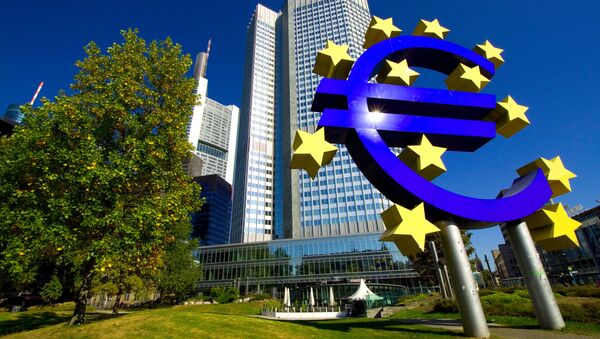 © Fotolia / VRD
Subscribe
International
India
Africa
European Central Bank officials are still at loggerheads on how to grapple with the risk of declining consumer prices in the Eurozone, in a sign that internal divisions persist in the run-up to a crucial meeting later this month.

The decision on the new bond-buying program, known as quantitative easing, will be made after the ECB’s crucial meeting on December 22.

Their remarks suggest that there is still a chance that a decision on the bond purchases could be delayed in the face of overwhelming market expectations that the Governing Council will announce a bond-buying program next week.

ECB Under Pressure to Tackle Deflation Threat
In an interview with the German magazine Der Spiegel, Sabine Lautenschläger, a German member of the bank’s executive board, said that she did not think conditions were yet grave enough to warrant government bond purchases.

“There must be a threat of exceptional risks materializing, and there must be reasonable balance between the benefits of, and risks entailed in, such a program. I do not believe that to be the case at present,” Ms. Lautenschläger said.

Benoît Coeuré, a French member of the bank’s executive board, remained upbeat on quantitative easing during an interview with the broadcaster France 24.

German Authorities Ready for Greece’s Exit From Eurozone: Reports
“I don’t want to prejudge what my colleagues and I will decide on Jan. 22 — it’s too early. But it’s clear that it’s a subject we are regarding with a lot of attention,” Coeuré said. He added that quantitative easing “should be an instrument to create confidence, to unite Europe, not to divide Europe.”

A decision on quantitative easing may also be affected by proceedings at Europe’s highest appeals court scheduled for later this week.

On Wednesday, the European Court of Justice in Luxembourg will issue a non-binding opinion on the ECB’s earlier bond-purchase program known as Outright Monetary Transactions, or OMT. If the High Court rules against OMT, it could have a significant impact on the implementation of euro QE.

The program, which aimed to protect weaker eurozone countries from bond speculators, was never used.  However, the opinion of Pedro Cruz Villalón, one of the advocates-general at the European Court of Justice, will be closely studied for any sign that the court may restrict any QE design.