Reform and Adjust or Fade Away: Global Economic Prospects for 2015 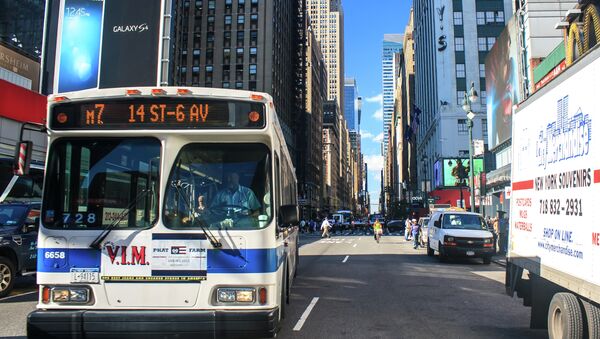 The global economy is facing major headwinds and risks, and the only way to recovery is via painful structural transformation, both in the developed world and beyond.

IMF Claims US Economy to Grow Despite Weakening Global Economic Recovery
MOSCOW, January 18 (Sputnik), Kristian Rouz – The first half of January was a rather beneficial time for investors worldwide as most markets continued their rallies after the last year’s significant gains. The continued slump in oil prices, yielding the current Brent crude value of just below $50/bbl, came in as a natural blessing for many cornerstone industries across developed nations, with consumer confidence in the US at its strongest in 11 years, while in Japan the manufacturing indicators have shown a sustainable growth on weaker yen and cheaper energy. However, several risks to the global recovery have prompted the World Bank to downgrade their global growth outlook to 3% this year from the previous evaluations of 3.4%.

One of the main reasons for the gloomier forecasts would be the most recent sudden move of the Swiss National Bank, which has arguably undermined the markets’ trust in central banks across the advanced world. Other global risks play a no less significant role as well, with China slowing down amidst alarming tendencies in their real estate market, while the economic strength of the EU’s flagship nations is nearly offset by the turmoil in the corrupt, inefficient and inflation-prone likes of Greece, Italy and Spain. The main challenge, however, is posed by the uncertainty of whether cheaper oil will trigger a collapse in over-valued energy stocks in the US or if the balance between the price of a barrel of crude and energy shares is here to stay for the mid-to-long-term, spurring both the consumption and production of goods and services in the world’s leading economies.

World’s Largest Oil Service Company Cuts 9,000 Jobs on Low Oil Prices
The oil issue remains the most acute, as crude producers, traders, investors and the general public have watched, fascinated at the price collapse by more than half since mid-2014. Most consumers are enjoying more money in their pockets, as a gallon of gas in New England is just $2.35, down from $2.94 in early December. In the Midwest a gallon costs even less, some $1.95. According to the official data by the US Power Data Administration, the average household will save up to $750 this year due to cheaper gas. This impacts not only automobile owners, but also those in the American Northeast and Midwest who rely on oil and natural gas home heating. As 40% of the US households live with $40,000 a year or less, as Census Bureau data indicates, the $750 discount on fuel expenses will be be a significant benefit.

This data is supported by the recent data released by the University of Michigan, claiming US consumer confidence is at its highest in 11 years as of this January, after having skyrocketed to the figure of 98.2, from 93.6 just a month earlier.

“We continue to generate jobs at a fairly rapid clip, and what you’re also seeing is consumers’ response to what I call a tax cut from lower gasoline prices. That frees up a lot of spending and that means they can purchase other goods and services,” Brian Jones of Societe Generale in New York told Bloomberg.

However, some observers suggest that ever-decreasing oil prices might destroy US oil, the same as in 1986 during the famed ‘oil bust’. Some say the Saudis are winning in the price war against the US, as there has been less drilling in North America in the past few months.

Quarter of US Economy About to Skyrocket on the Oil Slump
“OPEC’s strategy is working, and it will be obvious in U.S. production by midyear when growth from shale plays will come to a halt,” James Williams of WTRG Economics in London, Arkansas, old Bloomberg.

However, even though the price of crude has dropped, energy stocks are still on the rise. On 16 January, as the markets in New York rallied to a close, 8 of 10 best performers were energy enterprises. It makes little sense that where the law of the market says “sell stock when profits drop,” investors are still betting that energy prices will rebound quickly. One possible reason could be attributed to the growth of the US chemical industry, representing some 25% of America’s GDP. In other words, cheaper oil has awakened one of America’s biggest industries. Another indirect beneficiary of cheaper oil is the pharmaceutical industry.

The rest of world is feeling feverish at best. The Eurozone is most likely moving towards a full-scale stimulus now after the Swiss central bank (SNB) broke its promises and let the Franc appreciate against the European currency. The result was a capital flight and an overall gloom in London, Paris and Frankfurt, exacerbated by the long-lasting intra-EU standoff between the advanced North and poorer South over pan-European fiscal and monetary policies. The threat of deflation and weak growth has added the prospect of Greece leaving the Eurozone: Berlin and the hawks in Brussels insist on systemic reforms in the weaker members, while the corrupt South just wants an influx of the cheaper money liquidity. The German economy grew an annualized 1.5% in 2014, while the Eurozone grew by 0.2%. Whether the hardliners demanding structural reform in the South will prevail in Brussels or the European Central Bank will be allowed to spur growth by depreciating the euro, is yet unclear, but the stimulus prospects are now bigger than they were before the Swiss franc story.

Weakest Eurozone Members Need Reforms, Not Money: German Finance Officials
In Asia-Pacific, Japan is growing sustainably with producers and exporters benefitting from a weak yen and low oil prices. However, growth figures are falling short of Shinzo Abe’s government targets and the deflationary threat is still there. Besides, the recent move by SNB has made it harder for any central bank to manage the monetary situation, as markets’ trust in regulators has been badly shaken. Tokyo expects 1.5% this year, and the PMI so far is optimistic. At 51.9, the Purchasing Managers’ Index hints at acceleration in Japan’s manufacturing. However, Japan is still underperforming, the IMF recently said, and the government must act decisively to spur growth by any means necessary.

China poses the greatest concern at this point. A weaker growth in the EU has taken its toll on global demand for Chinese-produced goods. As commodity prices, for aluminium, copper, zinc, nickel, lead and tin, used by China’s manufacturers, have fallen continuously since mid-2013, a near-deflationary situation at factory gates exists on the mainland. China’s growth forecasts have been revised down to 7.1% in 2015, which, compared against their population growth and other factors, is insufficient for China to sustain itself without economic turmoil.

But Mainland China’s biggest issue at this point is the real estate sector, where easy credit has driven prices up, and an asset bubble is forming. In early 2015, prices continued rallying despite Beijing earlier efforts to stave off a collapse by promising monetary easing – which would trigger a depreciation of all assets, including real estate.

The world economy appears to be teetering on the edge of a looming disaster. If structural reforms are not made in the next months, the world economy could face another downturn, worse than that of 2008.