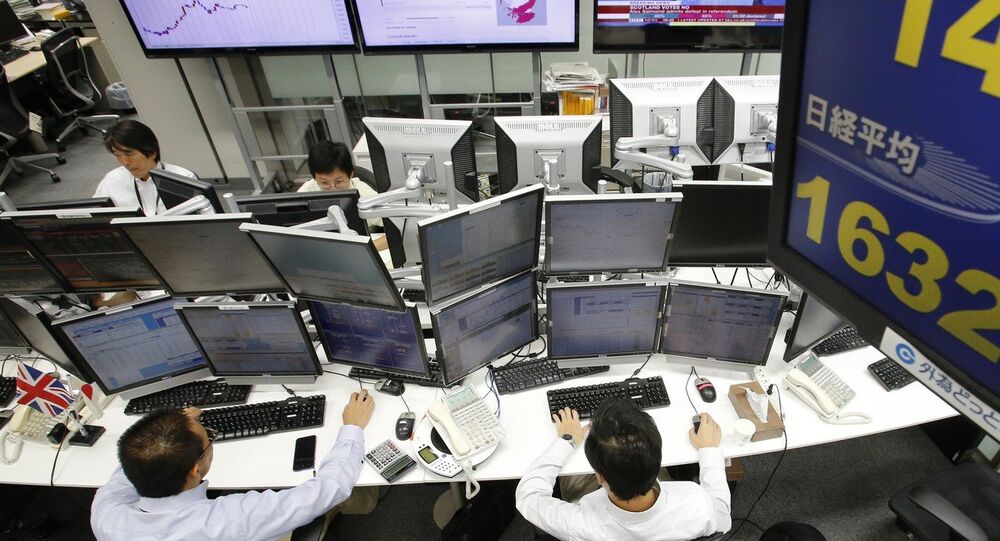 Asia-Pacific Stocks Up on Financial Sector Gains, Oil Back to $60/bbl

© Fotolia / marrakeshh
Oil Prices Rise Amid Militant Attacks on Libyan Oil Depots
MOSCOW, December 26 (Sputnik), Kristian Rouz — Markets in Asia-Pacific have been mixed during holiday trading today, with most indices edging slightly up, and mainland China’s stocks being driven by gains in lending and insurance companies. Japan’s stocks rebounded after initial losses as the yen weakened and Bank of Japan (BoJ) once again found itself under pressure for more stimulus as manufacturing data came to investors’ disappointment. Precious metals and oil advanced with the biggest markets in the region. Markets in Hong Kong, Australia, New Zealand and the Philippines are closed during the Christmas holidays.

“The PBOC’s plan to waive a requirement for lenders has a similar impact to cutting of reserve ratio requirement,” Sam Hsieh of the Fuh Hwa Securities Investment Trust in Taipei told Bloomberg.

© Wikipedia / Fg2
Bank of Japan Head Urges Increased Corporate Spending to Spur Economy
In Japan, the yen slid 0.12% against the dollar. Macroeconomic data published today pointed out the weaknesses of Prime Minister Shinzo Abe’s economic policies dubbed ‘Abenomics’. Manufacturing output declined 0.6% as opposed to a previously anticipated growth of 0.8%. Retail sales dropped 0.3%; real wages also fell. Japan’s domestic demand is ever weakening as evidenced by further slowing inflation, currently at 0.7%, which is far below the 2% target. In such circumstances, the nation may rely on exports, and a weaker yen might come in handy. Markets are generally anticipating another round of stimulus measures from the Abe government.

“The market is starting to imagine there might be more easing, and that is leading to yen selling,” Yuji Saito of Credit Agricole in Tokyo told Bloomberg.

Japanese stocks surged, as a weaker yen is likely to aid big exporters and prompt another wave of BoJ easing. Nikkei closed 0.1% higher today, having risen 1.1% this week amidst its lowest trading volumes since May, according to Reuters. Leading the gains were Fanuc Corp, edging 0.4% up. One of the zaibatsu, Sumitomo Mitsui Financial Group, surged 0.9% after yesterday’s announcement that it will purchase Citi’s local consumer-lending branch. The broader Topix Index of Japanese stocks rose 0.4%.

© REUTERS / Brendan McDermid
Global Markets Surge Amid Gloomy Early 2015 Forecasts
Crude oil has retreated from its initial advances today after Japan’s import data reached the markets. The contracted price is hovering just above $60/bbl of Brent crude, supported by the US consensus price tag. On the supply side, the US is holding the highest December level of crude reserves, having recently stockpiled an additional 7.3 mln bbl of oil. On the demand side, the US is growing, but the possible effects of US growth on oil prices are offset by the aforementioned huge reserves in place. In Japan, crude imports plummeted 17.3% in November year-on-year, according to data from Japan’s Ministry of Economy, Trade and Industry, which is the main driver behind today’s oil prices. Brent is now trading at $60.30/bbl.

"Normally, positive stockpile data of this magnitude would surely have broken support levels. However, it seems there is not enough downward pressure to keep prices down," Singapore-based Phillip Futures said.

© Sputnik / Oleg Lastochkin
West Drives Gold Prices Up by Printing More Paper Money: Swiss Investment Advisory Group
Oil prices declined 46% this year in their biggest drop since 2008. The November 28 OPEC decision to keep volumes of crude production in place added to the downward pressure on oil; however, prices have somewhat stabilized near the average breakeven for US commercial shale oil producers. Saudi Arabia said today the oil price for the next year would be $80/bbl. Nevertheless, demand-side weaknesses hardly support such aspirations.