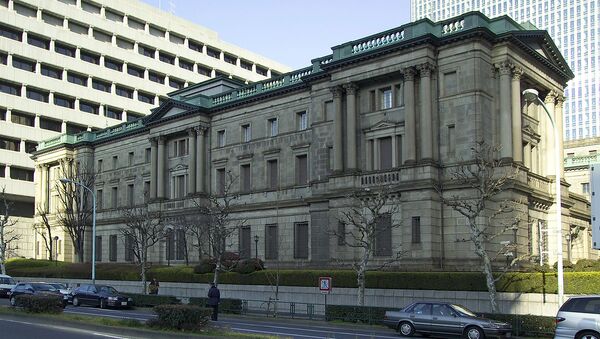 Bank of Japan Excludes Possibility of Repeat of Russian 1998 Crisis
MOSCOW, December 25 (Sputnik) – Bank of Japan (BoJ) head Haruhiko Kuroda said in his Christmas day speech that the nation’s businesses should increase wages next year in order to help the Japanese government overcome deflation. Kuroda also noted that the recent slump in global crude prices offer significant advantages to Japan’s economy, and will contribute to the acceleration of price growth in the long-term.

During his meeting with leaders of Japan’s biggest enterprises in the nation’s most prominent business center, the Keidanren, Kuroda said that while businesses would suffer losses caused by the increased spending on labor, eventually, “the rule book for business will be rewritten” as soon as the nation’s economy achieves the targeted 2% inflation.

"If 2 percent inflation is achieved in Japan as in trading partners going forward, at least a risk of the appreciation of the yen brought about by the differences in inflation rates between Japan and abroad will become smaller," Kuroda said as quoted by the RTT News.

As a result, the BoJ governor said, Japan’s cornerstone financial and industrial enterprises, the zaibatsu, which includes Mitsubishi, Nissan and Kawasaki will largely benefit from their improved position in international trade. Other large exporters, like Toyota Motors, will also see benefits of more inflation and a weaker yen.

Bank of Japan Promises More Asset Buying Amid Internal Opposition
“This is a great chance,” Kuroda noted. “Firms that are able to get ahead of a change in the environment promptly and to adapt to the economy in an expanding equilibrium will become the winners of the competition and enjoy prosperity in the new era.”

Kuroda also said that despite cheaper oil, deflation has only been spurred, prompting the BoJ to embark upon an unprecedented 60% increase in monetary easing this past October, hoping that, in the long run, Japan’s global competitiveness will be boosted.

"Let me be clear that October's monetary easing wasn't directly in response to crude oil price falls." Kuroda said. "Japan, a commodity-importing country, benefits greatly from the decline in crude oil prices, especially when it is caused mainly by supply-side factors, as is the case now," BoJ head added.

Japan Easing Pushed US, Europe Markets Higher Despite Asian Risks
Kuroda’s recommendations could be easily implemented by the zaibatsu and other large enterprises that are already experiencing the positive effects of weaker yen and cheaper fuels. However, it is not yet clear the increase in salaries nationwide will spur inflation, as Japanese households are trapped inside what Kuroda calls a ‘deflatory mindset’ – when people are reluctant to spend money, hoping for a future decrease in prices.

"I strongly hope the expansion of our stimulus program will have a positive effect on wage negotiations next spring and on firms' price-setting activities," Kuroda said as reported by Reuters.