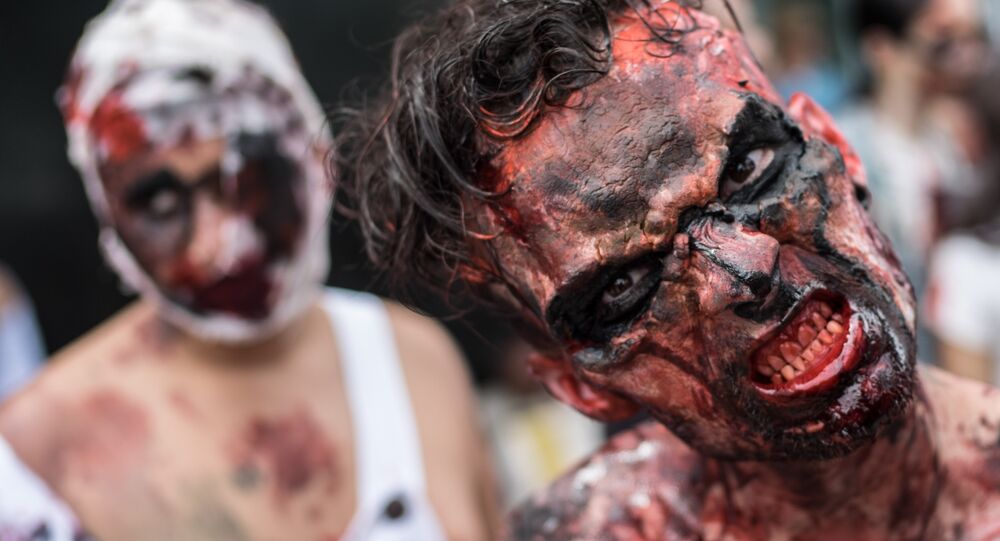 Forget Rick Grimes, only Russians have the verve to save humanity from zombies.

In The Walking Dead universe, a mysterious flu virus leads to the outbreak of a global pandemic where the dead rise again. AMC’s hit series The Walking Dead, having just concluded its mid-season finale for Season 7, is the ongoing story of love, friendship, and gritty survival in a world where the American state has collapsed amidst a global zombie plague.

While critics might rave against the dehumanization inherent within the zombie narrative and its commercialization of wanton violence on an epic scale, The Walking Dead remains one of the most popular US TV shows with ratings regularly topping 11 million per episode. It also has a significant international following glued to Rick Grimes’ efforts to lead his battered clan of friends and family to some kind of sanctuary- even as unbridled savagery tests their morality at every step.

Indeed, the zombified stinking hordes are merely a growling backdrop to showcase the internecine warfare that pits one band of survivors against the other.

Tellingly, Rick’s group is most successful when they share resources, reach out to likeminded others, and form stable trading relationships with communities like Hilltop.

© AFP 2019 / Stan HONDA
'Survival is the New American Dream': Why US Youth Reject Capitalism
Yet in essence, America has dissolved and the only thing left is an ugly tide of primitive capitalism that cheapens life. The state has fallen into a black hole never to be mentioned again and survivors neither exhibit any sense of American identity, let alone any intention of restoring the integrity of the United States as even a remote ideal.

As TWD is set within the horror-thriller genre, no attempt is made to explain the origins of the zombie virus- still less the possibility of how the plague might ever be cured. What we do know from the existing canon, which includes the seminal comics, is that the zombie virus emerged amidst the raddled drug population of Los Angeles. While there may of course be a deeper source than that, as Haiti and colonial policies in Africa were with the AIDS epidemic, this is the ever expanding canon’s starting point. Symbolically, TWD portrayed the Center for Disease Control in Atlanta opting out as its director, Dr. Jenner, committed suicide. This marked the capitulation of the federal government to the zombie onslaught and confirmation that survivors were on their own.

Unlike TWD, World War Z did attempt to offer geopolitical commentary on the zombie plague. India, North Korea, Israel, and the US are all mentioned.

© AFP 2019 / JANEK SKARZYNSKI
‘Big Mistake’: Germany Leads NATO War Games Near Russia 75 Years After Nazi Invasion
In one of the final frames of World War Z, a stirring scene shows immunized Russians armed with pitchforks massing under the ethereal red glare of the robust Kremlin Walls to confront swarms of zombies. As in Independence Day, when Russians joined the counter attack against the aliens, the West preserves a deep cultural memory of times when Russians valiantly stood up and rescued the world from the lowest pit of barbarity. After all, if Russians stopped Nazi tanks at the gates of Moscow in the winter of 1941-42, zombies weren’t going to get in either.

Like in the historic struggle against the various fascist pathogens that haunt us today, in the zombie apocalypse, Russia would be humanity’s best hope for survival.

Firstly, Russia’s vast geography and low population density would be an asset in partisan type operations that would see the uninfected removed to remote quarantine zones where they could be defended very efficiently.

Secondly, Russians themselves are the absolute key: Family values, patriotism, loyalty to the Russian state- all would play their part in ensuring a sense of higher purpose even in a time of greatest odds. Russian personal resilience, practical skills like ice fishing and mushroom hunting, trapping, and carpentry, would all play a decisive role. In short, the center would hold- just as it did when Napoleon invaded Russia in 1812, when Hitler attacked in 1941, and when bandits used the cloak of religion to strike in the 1990’s. The Russian state has the resources and the will to survive and to survive perfectly intact.

The Walking Dead’s world is one that much resembles that of the 17th century frontier in North America. The difference is that British settlers there had the craft and agricultural skills to survive in those times in a way that Rick Grimes’ people clearly do not. Instead, modern Americans in TWD are reduced to permanent scavenging, casual murder, endless warfare, and even cannibalism. This would not be the situation in great swathes of Russia where dispersed survivors would simply fall back on the skills that had been, much like their family icons, passed down from generation to generation.

In Fear the Walking Dead, America is paralyzed very early on not so much by the zombies themselves- but by ferocious public disorder that negates effective police action to crush the zombies as soon as they arise. Early police operations are confounded by rioters who turn on law enforcement in the belief that they are protecting civil liberties. Such thinking merely provides a liberal Trojan horse for the proliferation of zombies who then go on to undermine civilization.

At some point, even the US Army had to crack as things reached tipping point and bullets alone were never going to be enough to contain the zombies. Desertions and dereliction of duty soon followed the fall of the inner cities in America and coordinated central resistance was duly overwhelmed.

© Sputnik / Sergei Guneev
Russia's Strength in Loyalty to Traditions of National Unity, Freedom - Putin
By contrast, the one thing that Russian history shows is that at that very point when resistance ought to falter, Russia is able to draw upon some mysterious source of strength to strike back and turn the tide around. While the precise alchemy of this miracle may forever be unknown to Westerners, it does seem to be a solid relationship between a hardy people and a patriotic state that is absolutely committed to their defence.

The Walking Dead poses the question- what makes a nation? Clearly, a series where America is shown as an irrelevance on every level suggests that identity politics, ethnic separatism, and social division are the road to hell.

When a nation lives in the hearts of its people, it transcends calamity and becomes an eternal, spiritual ideal: This is how Russia and the ideal of virtue that Russia represents rose from the ashes of Mongol domination and Nazi aggression in a miraculous rebirth.

A storm of comets like those that laid waste North America 13,000 years ago, foreign invasions, or even the zombie apocalypse, would never in themselves destroy a nation in the sense that Russia is a nation. Like Rome, whose mantle now laurels Moscow, Russia is an indestructible ideal of land, faith, and people.  By contrast, when a nation degenerates into a cheap political construct, bereft of a life-giving sense of self, it dissolves into oblivion at the moment of catastrophe leaving only shells of human beings unable to think beyond their own needs. Interestingly, as if in homage to the West’s crisis of confidence, The Walking Dead is most popular in those societies that have surrendered themselves to globalist nothingness.