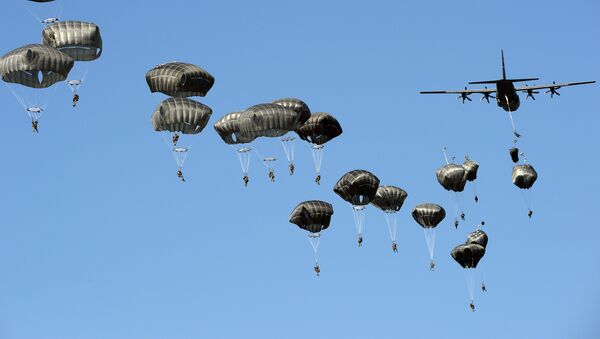 On Saturday, former German Chancellor Gerhard Schroeder called the build-up along the Russian border during the summer of hostilities a “serious mistake” only days after the country’s forces took the lead in NATO’s Anaconda-2016 war games on the 75th anniversary of the German invasion of the Soviet Union in June 1941.

Anaconda-2016 Drills Aim to Justify US Military Spending
The Anaconda War Games, billed as a response to “Russian aggression” by the United States and Allied Forces involves over 30,000 NATO troops in Poland and follows several rounds of war games along Russia’s border in recent months. The provocative wargames also constitute the single largest movement of foreign troops within Poland’s borders since World War II.

Last year, when American think-tanks first started to beat the drums of a new Cold War saying Russia may have designs on invading NATO countries, President Vladimir Putin attempted to dispel these concerns saying, “I think that only an insane person and only in a dream can imagine that Russia would suddenly attack NATO.”

The Obama administration appears to have indulged in the fantasy by increasing US defense appropriations along Russia’s border by fourfold to repel a prospective attack from Russian forces. More concerning, they have brought the rest of NATO’s membership along for the ride with Poland expected to call for permanent troops to be situated along their border and with a missile defense shield established in Romania and a new one under construction in Poland.

"Overall, the EU needs Russia and Turkey in terms of security policy,” said Schroeder blasting the government for outlandishly taking part of it the massive military buildup along Russia’s border on the anniversary of the Nazi invasion.

The Russian government has responded by developing the Yu-74 ultra-maneuverable hypersonic glide vehicle which military analysts confirm has the capacity to penetrate any missile defense system and has also looked to beat back US and NATO threats from the Baltic region with a series of “buzzing” incidents — flying fighter jets next to American battleships.

The Kremlin remains steadfastly opposed to being baited into massively increasing defense appropriations to ward off a threat that should not exist and continues to responsibly explore international avenues of diplomacy against the American and German-led provocations.