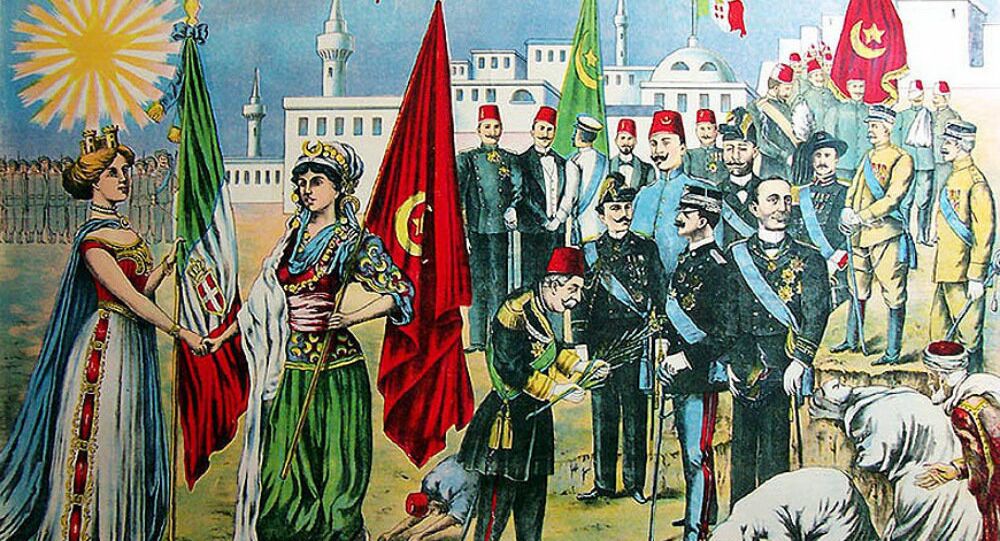 While Western officials consider the prospects of another military intervention in Libya, French special forces are already reported to be deployed in the country. Focusing on the Italian government's agonizing over the decision to intervene, journalist Manlio Dinucci suggests that the Libyan case is proof that the colonial era is far from over.

© AFP 2021 / MAHMUD TURKIA
Bad Habits Die Hard: Italy Readying for Invasion in Libya
In his article for Il Manifesto, republished and translated by Voltaire Network, Dinucci, an independent journalist, geographer and geopolitical analyst, looks back on the history of Italian and broader Western colonial and neocolonial intervention in Libya.

For starters, the analyst notes, Italian Prime Minister Matteo Renzi's back and forth agonizing over whether Italy should join the proposed Western military operation in Libya is a "comedy of errors."

"In the ambiguous comedy of errors [now being] played out in the theater of politics, lead actor Renzi [first] proclaimed that in Libya 'Italy will play its part'." Then, "as soon as the Pentagon said that Italy will assume the role of 'guide', he declared that 'Italy's military mission in Libya is not the order of the day'. In reality, it has already begun, with special forces that the parliament has placed under the orders of the prime minister."

© REUTERS / Esam Omran
Satellite Images Confirm: French Special Forces Deployed to Libya
"In 1911, Italy occupied Libya with an expeditionary force of 100,000 men. Shortly after the invasion, the Italian army shot and hanged 5,000 Libyans and deported thousands more. In 1930, on the orders of Mussolini, half of the population of Cyrenaica, about 100,000 people, were deported into about fifteen concentration camps, while [warplanes] crushed the resistance by bombarding villages with chemical weapons, and the army surrounded the area with 270 kilometers of barbed wire."

"The head of the resistance, Omar al-Mukhtar, was captured and hanged in 1931. So began the demographic colonization of Libya, by setting apart the most fertile land and relegating the population to the arid land."

"At the start of the 1940s," Dinucci recalled, "Italy, now beaten, was replaced in Libya by Great Britain and the United States. Emir Idris al-Senussi, placed on the throne by the British in 1951, conceded to these powers the use of Libya's air, naval and land bases. Wheelus Field, at the gates of Tripoli, became the main US air and nuclear base in the Mediterranean."

"In 1956, King Idris concluded a deal which exonerated Italy of the damage done to Libya, and allowed the Italian community to maintain its patrimony. Libyan oil fields, discovered in the 1950s, ended up in the hands of the UK company British Petroleum, the US company Esso, and the Italian company Eni. The brutally repressed nationalist rebellion led to [an Egyptian-style] bloodless coup d'état in 1969 by the 'free officers' directed by Muammar Gaddafi."

© AFP 2021 / TIZIANA FABI
New Overseas War? Berlusconi Slams Italy's Involvement in Military Campaign in Libya
Gaddafi, the political analyst recalled, abolished the monarchy, "forced the US and Britain to evacuate the military bases, and nationalized the foreign [-owned] properties." In the decades that followed, Libya would harness its oil wealth to better the lot of its citizens, eventually allowing it to boast of having the highest level of human development in Africa.

​The analyst reminded his readers that "this state, which constituted a factor of stability and development in North Africa, had, with its investments, favored the birth of institutions which would create financial autonomy and an independent currency for the African Union."

© AP Photo / Christophe Ena
Clinton Emails: Adviser Accused France of Bombing Gaddafi for Libyan Oil
Subsequently, the geopolitical analyst noted, "the United States and France – as Hillary Clinton's emails prove, decided to block 'the Gaddafi plan for the creation of an African currency' as an alternative to the dollar and the CFA franc. For that reason, and in order to appropriate Libyan oil and territory, NATO, under US command, launched the campaign against Gaddafi, in which the Italian 'left wing opposition' played a major part."

"The Libyan state was therefore demolished by war and by attacks form the interior by special forces and terrorist groups. The resulting social disaster, which has created more victims than the war itself, especially among the immigrants, has opened the door for the reconquest of Libya." Ultimately, Dinucci asks: "What is Italy now marching into, as it stamps on the Constitution and revisits its colonial past?"

Military Intervention in Libya Only Possible Under UNSC Permission

Just In Case: Inside the Pentagon’s Explosive Plan B for Libya