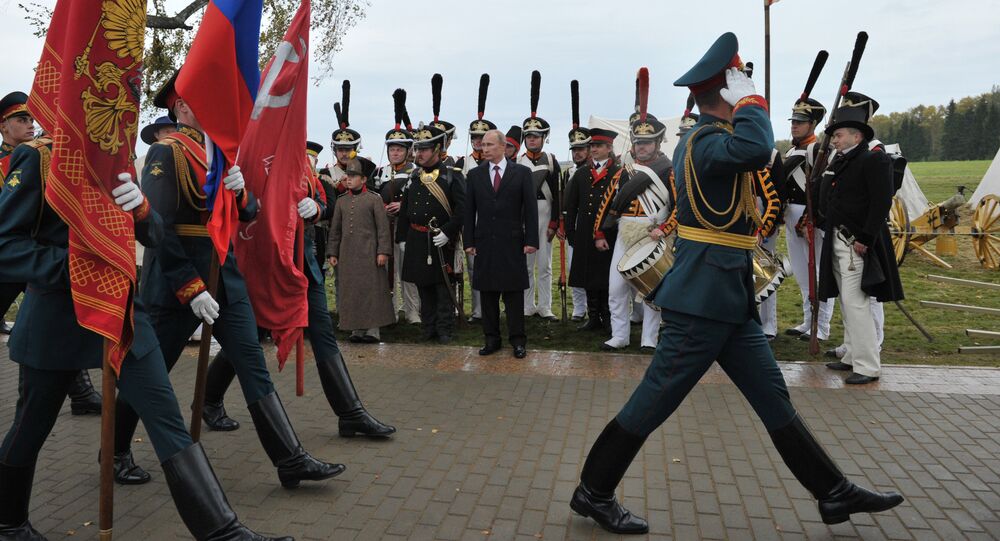 Much has been said and written about the Russian military operation in Syria, from its sudden start to its abrupt halt; few however have put it quite so 'eloquently' as The Spectator's Taki Theodoracopulos, who compared the Russian mission in Syria to Field Marshal Mikhail Kutuzov's successful campaign against Napoleon during the War of 1812.

In his column for the conservative British magazine, Theodoracopulos recalled the Russian field marshal's tactics during the war against Napoleon, and suggested that in one important way, they were similar to Russian President "Uncle Vlad" Putin's air operation against the terrorists in Syria: both men sought to avoid the risks of getting bogged down, and both men succeeded.

© Wikipedia
Five Incredible Victories of Russian Geopolitik, From Napoleon to Crimea 2014
Recollecting some of the minutia of the French campaign, which ended in total disaster for the invading army, Theodoracopulos noted that "Napoleon had gone into Russia [in 1812] with 500,000 men and was now leaving with fewer than 40,000."

The Russian commander, Mikhail Kutuzov, "[let] mother nature take care of the invasion," with his Cossacks "harry[ing] the retreating French, never engaging, just inflicting pin pricks, in a sort of slow torture never experienced before or since."

After the Russian campaign, the columnist wryly noted, "Napo never won anything important again. Mother Russia had defeated him as it defeated Hitler 130 years later."

"Which brings me to the present. Unlike the clowns of the EU and the bungling Americans, Uncle Vlad did a Kutuzov, went into Syria, avoided the risks of getting bogged down and, having lost only one aircraft that was shot down by a NATO power supposedly on his side, departed the quagmire with maximum results."

At the same time, Theodoracopulos sardonically added, "that fool of a Foreign Secretary Philip Hammond…warns us not to cheer because it would be 'like praising a man who stopped beating his wife'. Well, I don't beat women in general and my wife in particular, so I wouldn't know. What I do know is that Putin is authentic…the type who wins wars, a spontaneous and courageous leader who has shown up the West as a paper tiger."

"…And he didn't declare mission accomplished, a declaration that has proved fatal in the case of Iraq and Libya. This is the man the clowns in Brussels tried to bluff with Circe-like songs to Ukraine, so he took back Crimea as a bonus. His standing by Assad has shown up Uncle Sam yet again as an unreliable ally when the going gets tough."

Russian Defense Ministry
Russia’s 'Largely Achieved' Syrian Objectives in Facts and Figures
Ultimately, the columnist suggests, "no matter how hard the Americans and Europeans have tried to show Russia as a busted flush, the joke's on them. And by leaving the playing field, Vlad has fired a shot across Assad's bow, warning him to negotiate or else."

This, Theodoracopulos writes, compares very favorably with the US's stance in Yemen, where Washington continues to look idly by as the Saudi-led coalition bombs unarmed people and hospitals in their campaign against the Houthis, their cowardice in the face of anti-aircraft fire leaving them flying too high to hit legitimate targets.