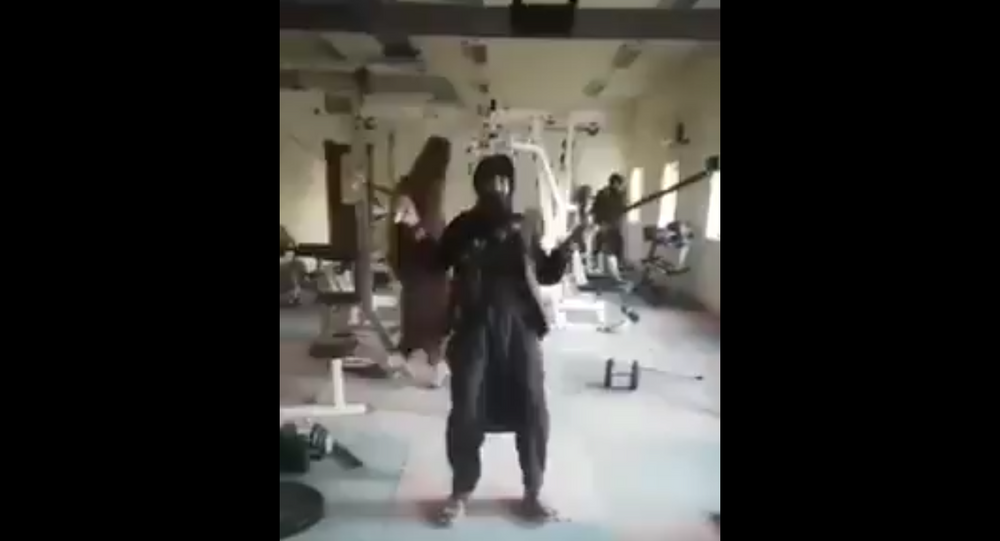 The Taliban* claims to control 85 percent of Afghanistan's territory as the US and its allies are withdrawing troops from the war-torn country. The group continues to make new advances every day, purportedly capturing key border crossings with Tajikistan, Iran, and Pakistan.

A Pakistan-based journalist Sami Yousafzai initiated a laughter riot on Twitter after he shared a video of a group of people, wearing turbans and kurta pyjamas using gym equipment.

While Yousafzai claimed that these people are Taliban fighters, another journalist Zoya Nafidi claimed that this gym facility is located in Nimruz, Afghanistan, and used to belong to US forces, but now stands deserted as they are pulling out.

Taliban inside a recently captured GYM in Nimruz. 🤭 pic.twitter.com/syeEt8qpnv

​The two-minute clip shows the men cycling and using gym equipment for their shoulders and arms, seemingly without understanding how everything works.

Netizens coming across the footage have sarcastically wondered if the Taliban fighters are now preparing for a Mr Afghanistan pageant.

If giving zero f**ks had a face.https://t.co/9FmtvZUljX

Legend says that guy is still trying to pick the 10lbs dumbbells. pic.twitter.com/GOfP4OY2n5

​Amid the ongoing clashes between Taliban fighters and Afghan security forces, India has evacuated around 50 of its diplomats from Kandahar. Similar measures have been taken by a number of other countries. On Wednesday, Taliban fighters claimed to have seized control of the Spin Boldak-Chaman border crossing connecting the towns of Wesh in Afghanistan's Kandahar Province and Chaman in Pakistan's Balochistan. The group claims to be in control of 85 percent of Afghanistan's territory, as the US is withdrawing its troops, ending its nearly 20-year military presence in the country.