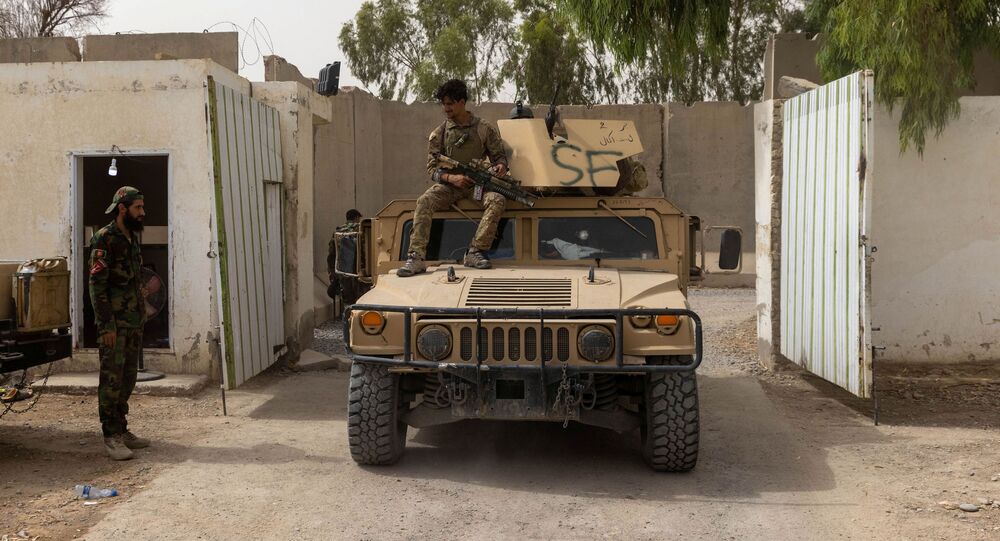 Afghan Special Forces Arrive in Kandahar to Fend Off Taliban Fighters, Only to Find Them Gone

Reports suggest that since the active phase of the US and NATO's withdrawal from Afghanistan began, the Taliban* has managed to bring around 80% of the country's territory under its control, attacking government forces as well as seizing cities and villages.

An Afghan special forces unit rushed to Khan Baba village in the southern province of Kandahar in order to repel Taliban* insurgents who had entrenched themselves there, according to a report Kabul received – only to find that the militants were long gone by the time they had arrived, Reuters reported.

According to a member of the unit, Major Mohammad din Tasir, the report received by the Afghan authorities claimed that some 300 Taliban fighters were planning to take the region of Kandahar under their control, but all the unit found was a few locals who had stayed despite the insurgent attack and several wounded soldiers of the Afghan security forces.

"Unfortunately, what we heard in the report and what we saw on the scene did not match", Mohammad din Tasir said, noting that the absence of Taliban fighters only proved that claims about the radical movement controlling 80% of the country were exaggerated.

Apparently, Taliban fighters have been largely using hit and run tactics, avoiding large confrontations that would result in heavy casualties, Reuters said in its report. In Khan Baba village, they used RPGs and heavy machinegun fire to attack local security forces, only to then retreat before the country's special forces arrived. According to Reuters, Afghan Air Force strikes against the attackers contributed to the outcome. Those Afghan soldiers who survived the attack but were wounded were taken to hospital by the newly-arrived troops.

Despite broadly using hit and run tactics, the Taliban is believed to have made advances in the west of Afghanistan near the border with Iran, the news agency claims. Some media reports suggest that as much as 80% of the territory of Afghanistan has fallen under the Taliban's control. Most of the recent advances were made shortly after US and NATO troops started to withdraw from the country. On 13 July, US General Austin Miller, who has been in command of the operations in the country, will relinquish his control, symbolically ending the US' 20-year military conflict.

The withdrawal was partly tied to the Taliban engaging in peace talks with Kabul, but there has been little to no progress in that regard lately. Still, the radical movement claims that it plans to become involved in running the country via peaceful means. US President Joe Biden has defended the decision to uphold the peace deal, brokered by his predecessor Donald Trump, with the Taliban and withdraw from Afghanistan. Biden noted that the US had achieved the goals it set forth at the onset of the armed conflict and added that nation-building was never Washington's aim in Afghanistan. POTUS added that only Afghans themselves can decide who runs their country, and how.

How Big a Security Threat Does China Face as Taliban Draws Closer to Border With Xinjiang?