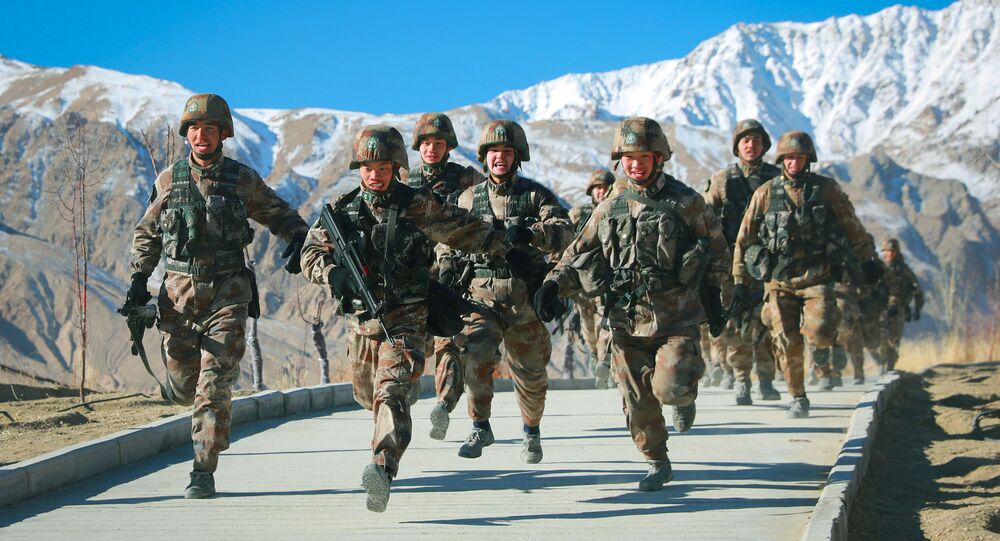 How Big a Security Threat Does China Face as Taliban Draws Closer to Border With Xinjiang?

There are increasing concerns that Northwest China's Xinjiang Uygur Autonomous Region is facing a resurgence of terrorism infiltrating through the Wakhan corridor, on the Afghanistan border, after the Taliban swept through northeastern Badakhshan province and is drawing closer to the border with China's Xinjiang.

Chinese State Councilor and Foreign Minister Wang Yi's visit to Turkmenistan, Tajikistan and Uzbekistan and the scheduled foreign ministers' meeting of the Shanghai Cooperation Organisation (SCO)-Afghanistan Contact Group this week come amid a growing spillover of security threats coming from the worsening situation in Afghanistan.

With the evolving Afghanistan situation, the Taliban* is quietly transforming itself to improve its international image, easing the concerns of and befriending neighbouring countries.

Chinese observers noted that China and Russia, as the major responsible powers in the region, will cooperate more with all parties in peacefully solving the Afghanistan issue and its reconstruction work and that Afghanistan will not become a "graveyard of empires" for China and Russia, since both countries uphold the principle of non-interference.

How Big Is the Threat?

With the US-led troops withdrawing from Afghanistan at a faster pace and the Taliban continuing to gain ground, some Western media have been hyping the so-called "China's fears." They said the Taliban is now on China's border, stoking instability in Xinjiang.

France 24 reported that China is worried about attacks on Afghanistan's border near China's Xinjiang, and claimed China's anti-terrorism measures have "spawned blowback".

However, Cao Wei, an expert on security studies at Lanzhou University, told the Global Times that it is highly unlikely that extremists and terrorist groups will enter China from the Wakhan corridor.

The part of the corridor which borders China is about 90 kilometres long, and it is not difficult for China to "block" it technically, Qian Feng, director of the research department at the National Strategy Institute at Tsinghua University, told the Global Times.

Meanwhile the Taliban today is totally different to what it was some 20 years ago, Cao said.

In an interview with This Week in Asia on Wednesday, Taliban spokesperson Suhail Shaheen said the organization sees China as a "friend" to Afghanistan and is hoping to talk to Beijing about investing in reconstruction work "as soon as possible".

Suhail also said the Taliban would no longer allow Uygur separatists, some of whom had previously sought refuge in Afghanistan, to enter the country. The Taliban would also prevent al-Qaeda* or any other terrorist groups from operating there.

A Taliban delegation also reassured Russia during their visit to Russia last week that it would not allow the country to be used as a platform to attack others.

All of these reveal that the Taliban is quietly transforming to become more like a political organization focusing on the internal affairs of Afghanistan, and it is preparing to take power, Cao said, noting that time will tell whether the Taliban's words will match its actions.

A recent US intelligence assessment estimated that the current Afghan government could fall to the insurgency as soon as six months after the American pullout, and media have reported the Taliban is preparing to take full control of Afghanistan.

Chinese analysts warned that if security threats in Afghanistan continued to spill over to neighbouring countries, extremists and terrorists are more likely to enter China through Central Asian countries and Pakistan.

The US troops in Afghanistan have compressed the working space of some terrorist groups in Central Asia in the past years, as some have moved to Syria, but with the  Taliban set to take power in Afghanistan, we need to observe whether the Taliban-backed al-Qaeda might develop again, Cao said.

The deteriorating situation in Afghanistan have quickly spread to Central Asia, with hundreds of Afghan servicemen crossing the border with Tajikistan recently in response to advances by the Taliban, Reuters reported. Tajikistan has called on members of a Russian-led military bloc to help it deal with security challenges emerging from Afghanistan.

Russia faces higher pressure than China as some terrorist groups may infiltrate to Russia through these former Soviet Union states and the spread may reach the Caucasus and Chechnya, Cao said.

Meanwhile, Russia shoulders the major responsibility for the security of Central Asia under the Collective Security Treaty Organization (CSTO), which includes Russia and five other former Soviet states, observers said.

China, Russia Won't Be the Next 'Empires' to Enter 'Graveyard'

This SCO-Afghanistan Contact Group meeting was elevated to the foreign minister-level this week for the first time since the mechanism was established in 2005. This indicates the urgency of the Afghanistan situation and the great attention and consensus of SCO countries to have a detailed and thorough discussion on Afghanistan and its reconstruction plans. Six of Afghanistan's neighbours are members of the SCO.

Sun Zhuangzhi, executive director of the Chinese Research Center of the SCO, told the Global Times that the meeting will enhance coordination efforts in pushing all concerned parties to seek peaceful means to solve the issue, come up with detailed plans on bilateral and multilateral levels to help Afghanistan with reconstruction, and warn some Western countries led by the US of their irresponsible withdrawal.

Russia is expected to engage in the SCO meeting after receiving a Taliban delegation last week.

Led by China and Russia and created in 2001, the SCO includes India, Pakistan and four other former Soviet republics: Kazakhstan, Kyrgyzstan, Uzbekistan and Tajikistan. It has four observer states - Afghanistan, Mongolia, Belarus and Iran - and six dialogue partners.

India wants to use Afghanistan to extend its strategic reach because the country circles Pakistan in the north and west. India also needs to guarantee Afghanistan not become a haven for anti-India forces, Qian said, noting in the past 20 years, New Delhi's aid to Afghanistan reached $3 billion and it has maintained a good relationship with the Kabul government, regional leaders and civil forces.

India's relationship with the Taliban was bad and it is eager to resume contact with it given the latter's rising influence, which indicates Pakistan's influence in Afghanistan, Qian said.

Some Western countries have described China and Russia's effort to engage in Afghanistan's reconstruction as the "next empires" to enter the "graveyard" of Afghanistan.

In a report published on the website of The Hill, it said China plans to "swoop in" and "fill the vacuum" left by the withdrawal of US troops and said that China will be the "next empire to enter the Afghan graveyard".

However, Cao said that China and Russia, upholding the non-interference principle, will focus on economic help rather than military involvement, noting that China, Russia will not be the next empires as Western media-hyped.

Both China and Russia stressed that the Afghan issue should be dealt with by the Afghan people, while the US bluntly interfered in Afghanistan's internal affairs, analysts said.

And Taliban has expressed its welcome to China over help with reconstruction, and it would strive to maintain stable relations with China and other neighbouring countries if it takes power, observers said.

As for the possible threat of the resurgence of terrorism evolving with China's engagement with the Taliban on the reconstruction work, Chinese analysts said that the Taliban is unlikely to deliberately export its ideological thought, but China should maintain its alert over threats from extremist groups which voluntarily accept the Taliban's fundamentalism and attempt to affect Xinjiang.

The Taliban is fragmented as many of its senior leaders are not in Afghanistan, thus some branches of the Taliban in Afghanistan have taken in members of the East Turkestan Islamic Movement (ETIM), Qian said, noting that no matter who forms the Afghan government, continuing anti-terrorism is Afghanistan's international responsibility as well as the significant foundation of future China-Afghanistan relations.

The Taliban in Afghanistan has gradually transformed to a "regional government" that is more willing to participate in governing the country rather than just harbouring terrorist groups, but even if it still adopts extremist means in the future, China could deal with it with its comprehensive domestic anti-terrorism mechanism and regional cooperation as well as international law.

Observers said the US will not offer any helping hands to Afghanistan's reconstruction work despite the ongoing suffering of the country was purely caused by the US.

The US will also unlikely completely give up its involvement in Afghanistan, and it may expand its military presence in the region in the name of anti-terrorism, Qian said.

*Taliban and al-Qaeda are terrorist groups banned in Russia