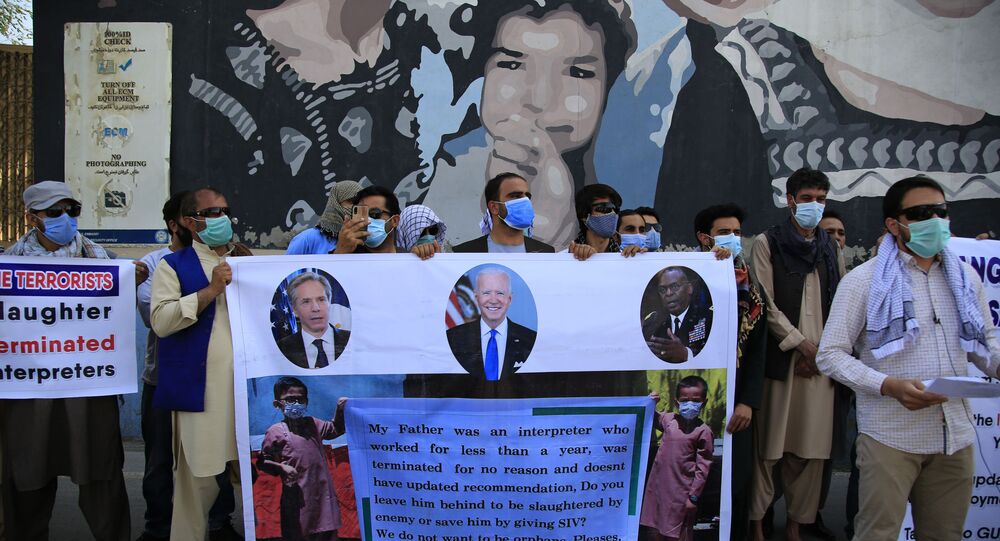 Earlier, White House Press Secretary Jen Psaki said that the Biden administration will fly Afghan interpreters to third countries in August where they can wait until their special immigrant visas are approved.

The Taliban Movement will not target Afghan translators who worked with the United States, spokesman Suhail Shaheen said on Friday.

"We guarantee that they can be in Afghanistan and live a normal life; they will not be harmed," a Taliban spokesman said at a press conference in Moscow.

He added that the Taliban is ready for contacts with the US and ready to start relations ‘from scratch’.

The Biden administration will fly Afghan interpreters to third countries in August, where they can wait until their special immigrant visas are approved, White House Press Secretary Jen Psaki said on Thursday.

Jen Psaki did not disclose an exact number of how many Afghan interpreters would be relocated.

The US intends on maintaining a diplomatic presence, securing the international airport and pursuing peace in Afghanistan following their withdrawal from the country, President Joe Biden said on Thursday.

“We’re also going to continue to make sure that we take on the Afghan nationals who work side-by-side with US forces, including interpreters and translators — since we’re no longer going to have military there after this; we’re not going to need them and they have no jobs — who are also going to be vital to our efforts so they — and they’ve been very vital — and so their families are not exposed to danger as well,” Biden said.

"Since I was inaugurated on January 20th, we’ve already approved 2,500 Special Immigrant Visas to come to the United States. Up to now, fewer than half have exercised their right to do that. Half have gotten on aircraft and com — commercial flights and come, and the other half believe they want to stay — at least thus far," Biden said.

Earlier, Pentagon spokesman John Kirby said that the US Department of Defense was considering locations where it could send Afghan interpreters and other allies.

Afghan interpreters are facing threats from the Taliban movement for helping US and NATO forces throughout the last 20 years of the war in Afghanistan.

The departure of US and NATO forces from Afghanistan, scheduled to be completed by 11 September, has been met with a surge in violence, with dozens of districts in Afghanistan's rural north falling to the Taliban movement in the past weeks.
In recent days, hundreds of Afghan government soldiers fled to Tajikistan in order to avoid capture by the Taliban, which now controls more than 70 percent of the Afghan-Tajik border. Uzbekistan has refused to accept Afghan soldiers who are trying to cross the border.