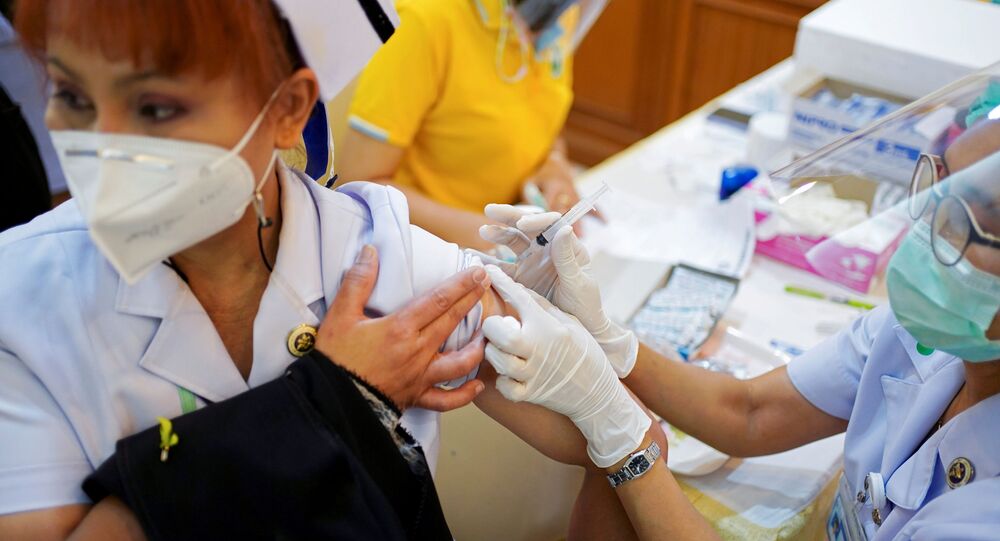 Prime Minister and former Army chief Prayuth Chan-o-cha was reported to be self-isolating after a chamber of commerce chairman he met in Phuket last week tested positive for the deadly coronavirus strain.

“Don’t take it seriously. You can forget about it”, Health Minister Anutin Charnvirakul said on Monday morning in response to angry reactions.

The leaked minutes of a Health Department meeting show that one unidentified official raised concerns about giving the expensive and difficult-to-store US-German Pfizer-BioNTech messenger RNA vaccine, fearing it would prompt a public belief that the Chinese-made Sinovac shot being rolled out to the general population was inferior.

“If we were to give Pfizer vaccines to medical professionals, it will imply that the quality of the Sinovac vaccine given to them earlier is low, and it will be difficult for us to find a reasonable excuse”, the official is recorded as saying.

© REUTERS / KAMIL KRZACZYNSKI
Teenager Dies in Sleep After Receiving Pfizer COVID-19 Vaccine, Reports Say
So far, only Sinovac and the Anglo-Swedish AstraZeneca "Oxford" jab have been used in Thailand's immunisation programme. Most healthcare workers have already received their initial and booster doses of Sinovac, and millions more are expected to be delivered later this year.

But critics of Prime Minister Prayuth Chan-o-cha's government took to Twitter yesterday, accusing him of blocking the Pfizer vaccine and demanding all doctors and nurses receive it as an additional booster.

“It was only someone’s opinion recorded”, Anutin insisted on Monday. “We wouldn’t suddenly translate anyone’s opinion into practice because there are many more steps in the process”.

Meanwhile Prayuth was reported to be self-isolating after a chamber of commerce chairman he met in Phuket last week tested positive for the deadly coronavirus strain.

Former Army chief ​Prayuth came to power in a military coup d'etat in 2014, after the Constitutional Court impeached Yingluck Shinawatra, the sister of exiled former PM and businessman Thaksin Shinawatra.