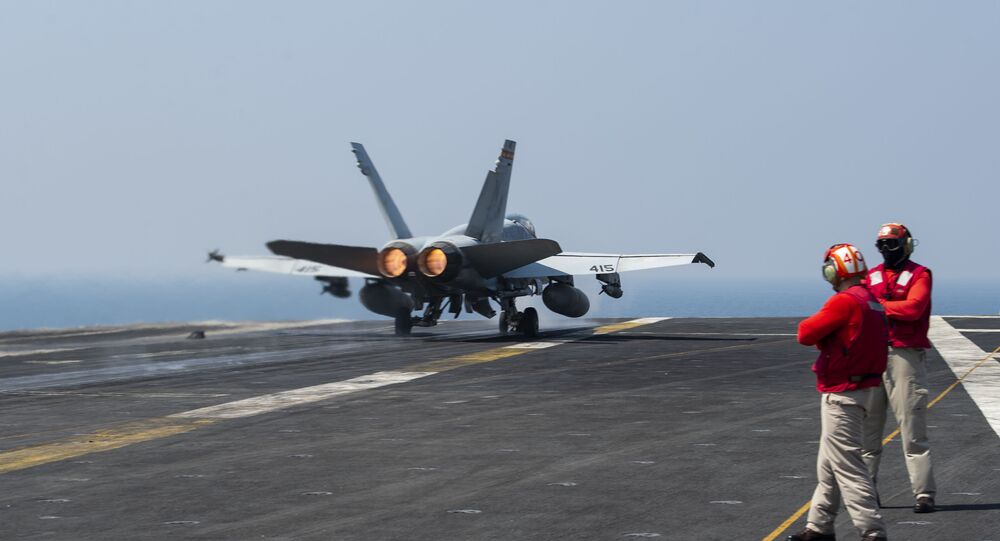 The US has stepped up its drills off China’s coast in recent years, holding multiple carrier drills as well as maintaining a constant daily presence with spy planes and patrol aircraft. Washington has presented itself as a mediator in an ongoing dispute between China and several other nations, although the US has no territory in the region.

The US and Chinese navies are both holding aircraft carrier drills in the waters off China’s coast as Washington postures as standing up to Beijing’s “aggression.”

On Sunday, the South China Sea Probing Initiative (SCSPI) think tank reported that the US Navy aircraft carrier USS Theodore Roosevelt had entered the South China Sea via the southern Strait of Malacca. That same day, SCSPI reported a US guided-missile destroyer, the USS Mustin, was sailing in the East China Sea close to the Yangtze River delta and the cities of Shanghai and Hangzhou.

Then on Monday, China’s Global Times reported that the Chinese aircraft carrier Liaoning had led a task force alongside the Type 055 cruiser Nanchang through the Miyako Strait and into the Philippine Sea before launching exercises east of Taiwan.

The two carrier strike groups are hundreds of miles apart, but the convergence of the two nations’ naval forces highlights the growing tension in the region as the US doubles down on its diplomatic and ideological offensive to portray China as a threat to the global order.

Last week, US Secretary of State Antony Blinken flew to Europe to press US allies on the need to close ranks against China. In an interview given to Italian media, he said Washington’s goal was “not to contain China or keep it down” but to “preserve the rules-based international order, in which we have all invested so much over the past 75 years, and which has served our interests and values well.”

“When someone challenges this system, be it China or others – when they do not play by or respect the rules, or try to undermine the commitments made by others, we all have reason to object,” Blinken said, accusing Beijing of “undermining this order, violating human rights and other commitments.”

Under former US President Donald Trump, the US shifted its strategic focus away from the War on Terror and toward “great power competition” with Russia and China, in particular highlighting the danger posed by the latter, which could surpass the US economically in the next decade and has a population more than four times the size of the US. However, since US President Joe Biden took office in January, he has raised the ideological appeal against China even higher, accusing Beijing of genocide in Xinjiang on spurious grounds, of crushing democracy in Hong Kong, and of aggression against Taiwan.

Beijing has countered that all three issues are questions of internal security and not subject to the approval of the US or other world powers.

The US has also looked to its other partners in the region in an attempt to win them away from Chinese influence, including the Philippines, a nation that borders the South China Sea, has large overlapping claims with China over parts of the waterway, and houses thousands of US troops via a mutual defense treaty.

A showdown has developed between Manila and Beijing in recent days after Chinese fishing boats crossed into waters claimed by the Philippines. The government of Philippine President Rodrigo Duterte has claimed the vessels are part of China’s maritime militia, sent to “swarm” Filipino boats and stake out a claim for China over the nearby Whitsun Reef in the Spratly Islands, while Chinese authorities have said the boats are sheltering from stormy weather and have no militiamen aboard.

On Monday, Duterte’s chief legal counsel, Salvador Panelo, warned Beijing that the boats’ prolonged presence was unwelcome and risked hostilities that both countries would rather not pursue.”

“We can negotiate on matters of mutual concern and benefit,” he said, according to Reuters, “but make no mistake about it - our sovereignty is non-negotiable.”

Ben Schreer, a professor of strategic studies at Macquarie University in Sydney, to the South China Morning Post Monday that the US display of force was intended to show to Manila the US is a “reliable and capable treaty ally,” adding that the Liaoning’s drills are “a signal to Japan, the US and other powers in the region that the [Chinese navy] is gradually developing a carrier capability, though at present it’s nowhere near” achieving this.