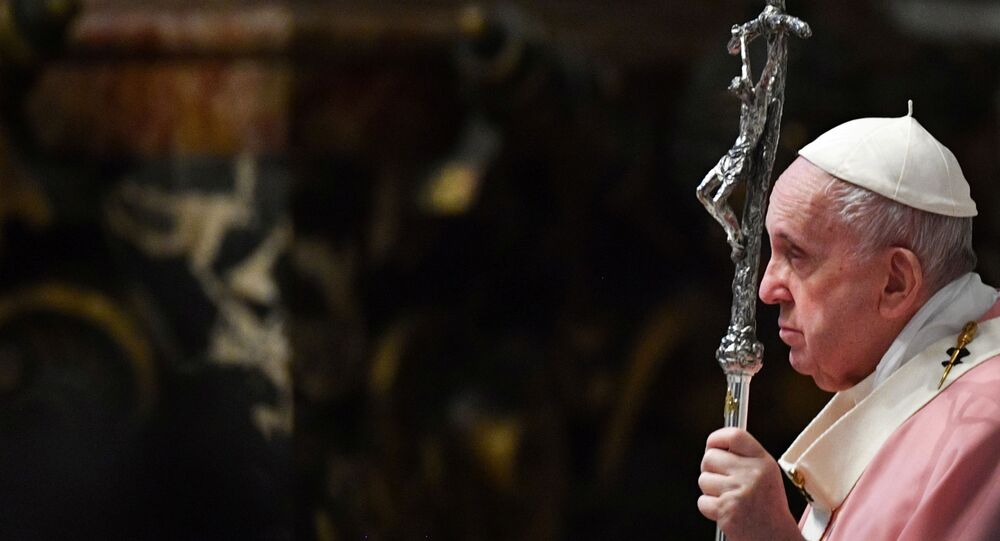 Last month, the Pontiff condemned a coup in Myanmar that he said had disrupted "the path to democracy" undertaken by the country in recent years.

Pope Francis has appealed for an end to the ongoing bloodshed in Myanmar, where more than 140 people have already died during mass protests against the military seizing power in a coup.

"Even I kneel on the streets of Myanmar and say 'stop the violence'. Even I open my arms and say 'Let dialogue prevail'", the Pontiff said at the end of his weekly general audience, held remotely from the Vatican library on Wednesday.

He added that "one more time and with much sadness" he feels "the urgency to talk about the dramatic situation in Myanmar, where many people, most of them young, are losing their lives in order to offer hope to their country".

The appeal comes after Pope Francis urged Myanmar's military to free political prisoners and put the country back on a democratic track during his annual address to the diplomatic corps on 8 February.

"The path to democracy undertaken in recent years was brusquely interrupted by last week's coup d’état. This has led to the imprisonment of different political leaders, who I hope will be promptly released as a sign of encouragement for a sincere dialogue aimed at the good of the country", he pointed out at the time.

As for the Pontiff's Wednesday remarks, these followed UN Human Rights Office spokesperson Ravina Shamdasani stating that at least 11 people were killed across Myanmar on Monday as military forces continued cracking down on the unceasing anti-coup demonstrations.

Demonstrators takes cover behind metal shields during a protest against the military coup in #Hlaingthaya Township, outskirts of #Yangon, #Myanmar, 14 March 2021. Anti-coup protests continued despite the intensifying violent crackdowns on demonstrators by security forces. EPA pic.twitter.com/hAbLT1ZQAs

UN Secretary-General Antonio Guterres, for his part, pointed out that "the killing of demonstrators, arbitrary arrests, and the reported torture of prisoners violate fundamental human rights and stand in clear defiance of calls by the Security Council for restraint, dialogue and a return to Myanmar's democratic path".

The UN earlier reported that at least 149 people had already been killed in Myanmar violence, while the global NGO Assistance Association for Political Prisoners put the death toll at more than 180.

State Counsellor Aung San Suu Kyi and ousted President Win Myint, along with other top officials accused of election fraud, are currently under arrest. The coup sparked mass protests with thousands of people taking to the streets of Myanmar to reject military rule.