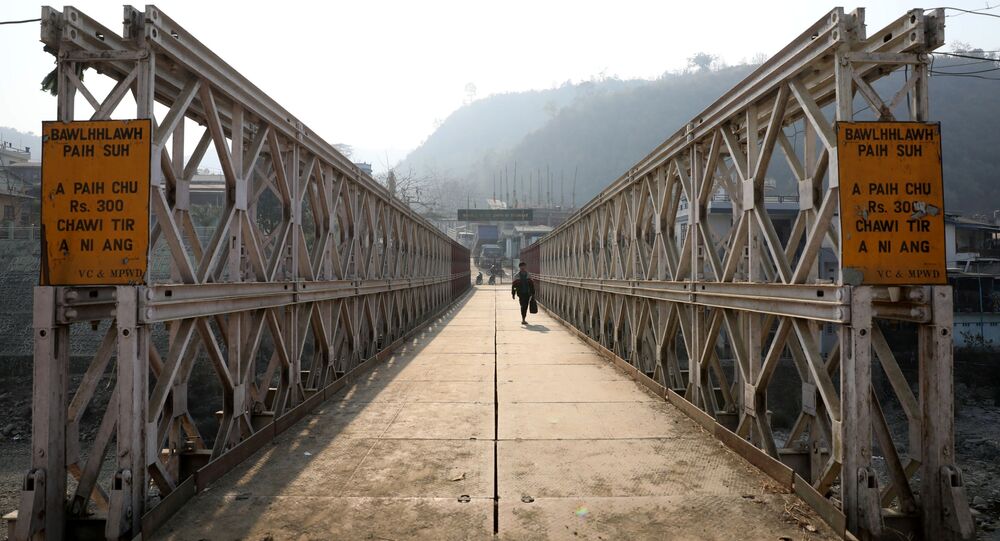 The Chin people are a south-east Asian and Sino-Tibetan ethnic group native to the Chin state of Myanmar. Considered one of the most persecuted minority groups in Myanmar, Chin people have common history with the Mizo community in India.

The Champhai district in India’s Mizoram state, which shares a border with turbulent Myanmar’s Chin state, has seen scores of civilians and policemen cross over into India.

Among those to have sought refuge in India are at least eight members of Myanmar's police force who allegedly defied orders from the military to shoot at peaceful protesters.

The country has witnessed widespread agitation against Myanmar’s military after the coup on 1 February when elected members of Myanmar’s ruling party, the National League for Democracy, were deposed by Myanmar’s military, the Tatmadaw, who have proclaimed a year-long state of emergency and placed power in the hands of their Commander in Chief of Defence Services Min Aung Hlaing.

Maria CT Zuali, Deputy Commissioner of Champhai, told Sputnik that she had received a letter from Saw Htun Win, an administrative officer in Myanmar’s Falam district, on 5 March "to hand over eight police personnel who escaped to India, as a friendly gesture".

New Delhi has yet to respond to the letter and a senior official in the home department of Mizoram told Sputnik on condition of anonymity: “We are still waiting for a direction from the Union Ministry of Home Affairs on this issue.”

The Myanmar policemen have given an account to the Mizoram police explaining why they fled the country.

“As the Civil disobedience movement gained momentum and [demonstrations] were held by anti-coup protesters at different places, we were instructed to shoot at the protesters,” the policemen said in a joint statement to Mizoram police. “In such circumstances, we didn’t have the guts to shoot at our own people,” he added.

Speaking about what is believed to be more than 100 other civilians who have entered India, Zuali told Sputnik: “Assam Rifles are deployed in the borders to guard illegal entry/influx of refugees.”

Even as the district administration and border security forces grapple with the flow of refugees, there is growing pressure from the local people in the state to support and protect the members of the Chin community in Myanmar who share bonds with the local Mizo community.

“The Chin community are our brothers. We have relations with them that are centuries old. We have been trying to attract the attention of the international community to their plight and their need for protection in view of the recent political trouble in Myanmar,” B Vanlaltana, president of Mizo Zirlai Pawl, a powerful student association, told Sputnik.

Mizo Zirlai Pawl represents the younger generation of Mizo groups in India, along with student communities, and works closely with Mizo-related groups in Myanmar and Bangladesh.

A representation was sent by Mizo Zirlai Pawl to the United Nations Secretary-General, Antonio Guterres, seeking protection for the Chin community. “Our people, the Chin, are falling under oppression and deprivation by the majority who control military power. For the Chin, the military junta in Myanmar represents not only a loss of political power but threats to their culture and existence as human beings,” the embassage said.

It also flagged concern of refugees entering India. “If an elected government is not restored in Myanmar it is certain that there will be a large number of Chin people who fled military oppression in search of survival. The first destination will be their cognate groups in India and Mizoram is bound to receive the largest number,” it stated.

“Apart from Mizoram, the three other states are also believed to  face a refugee  influx  from  Myanmar because of the present political scenario triggered by last month's military coup in the neighbouring country,”  he said in the state assembly.

Kremlin Is Concerned Over Growing Civilian Fatalities in Myanmar