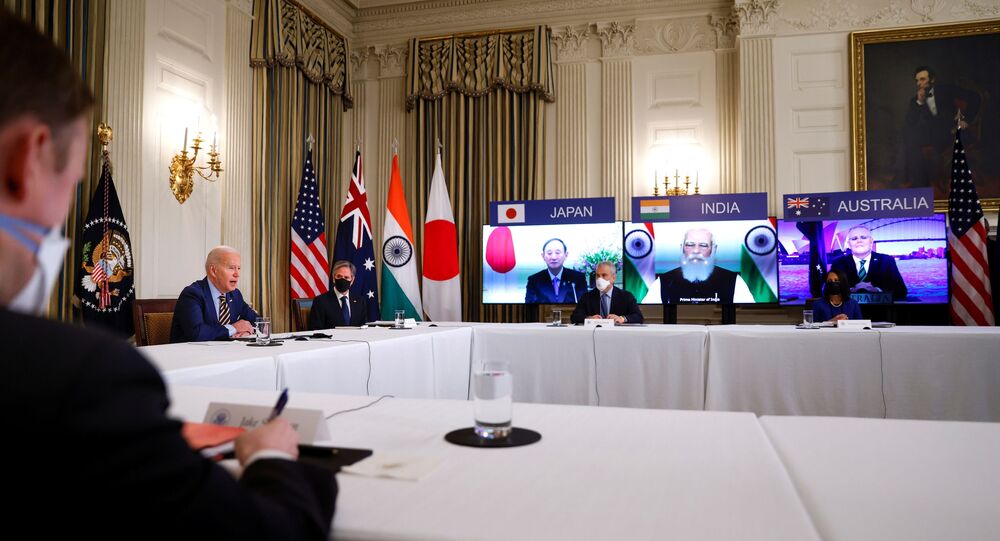 When US President Joe Biden took office on January 20, he indicated his policy toward China would change little from that of his predecessor, Donald Trump, by inviting Hsiao Bi-khim, the chief envoy to the US from Taiwan, to his inauguration. Taiwan is an island China claims as its territory.

At the first summit of the heads of state of the Quadrilateral Security Dialogue (Quad) on Friday, Biden hailed the bloc as a “vital arena” for maintaining a “free and open Indo-Pacific.”

“A free and open Indo-Pacific is essential,” Biden told the leaders of Japan, Australia, and India in the virtual meeting, which is the first he’s hosted since becoming US president in January, as well as the first time the heads of state of the four nations have held such a joint meeting.

“The United States is committed to working with you, our partners, and all of our allies in the region to achieve stability. This is a group particularly important because it is dedicated to the practical solutions and concrete results.”

Biden was joined by Vice President Kamala Harris and his chief diplomat abroad, US Secretary of State Antony Blinken, the latter of whom will soon participate in a meeting with his Chinese counterpart in Alaska next week. Although it was formed in the aftermath of the 2004 Boxing Day tsunami that devastated the Indian Ocean basin, the Quad is understood in its current formulation to be an anti-China alliance. It has been dubbed an “Asian NATO,” but the bloc has no similar formal declaration of mutual collective defense.

Indian Prime Minister Narendra Modi similarly praised the Quad as a “pillar of stability in the region,” saying the summit shows the alliance has “come of age.”

“As four leaders of great, liberal democracies in the Indo-Pacific, let our partnership be the enabler of peace, stability, and prosperity,” Australian Prime Minister Scott Morrison added, urging that they must include the regional “vision” as expressed through the Association of Southeast Asian Nations (ASEAN).

“Know, friends, that Australia, while looking to our friends in all of these tasks, we never leave it to our friends.  We’ll do our share of the heavy lifting to lighten the burden for us all,” Morrison added.

However, the Quad leaders also pledged to cooperate in other fields, including the restoration of democracy in Myanmar following the seizure of power by the military last month, the production and equitable distribution of COVID-19 vaccines across the Indo-Pacific region, and the launching of a critical- and emerging-technology working group. They also hoped to hold an in-person meeting before the year is out.

The meeting comes days after the White House National Security Council published an Interim National Security Strategic Guidance in which the Biden administration postures as shedding the isolationism of Donald Trump’s four years.

“Under the Biden-Harris administration, America is back. Diplomacy is back. Alliances are back,” the document says.

“The alliances, institutions, agreements, and norms underwriting the international order the United States helped to establish are being tested,” the document continues, claiming that “China, in particular, has rapidly become more assertive. It is the only competitor potentially capable of combining its economic, diplomatic, military, and technological power to mount a sustained challenge to a stable and open international system.”

The Trump administration arrived at many of the same conclusions, saying in 2018 that “great power competition” with Russia and China was Washington’s primary strategic concern. In November 2020, the State Department published a document outlining a long-term strategy for curbing China’s rise that includes a strong effort to encircle the socialist nation diplomatically and militarily, in a manner similar to how the US “contained” the Soviet Union during the Cold War.

However, Beijing has said its aim is internal development, not external expansion, and despite its steady increases in defense budget, China’s National Security Law was amended in January to explicitly state the People’s Liberation Army’s purpose is fundamentally defensive. Ahead of the Alaska summit next week, Chinese Premier Li Keqiang said he hopes for dialogue and cooperation, whereas Blinken plainly said he expects little use to come from the summit.