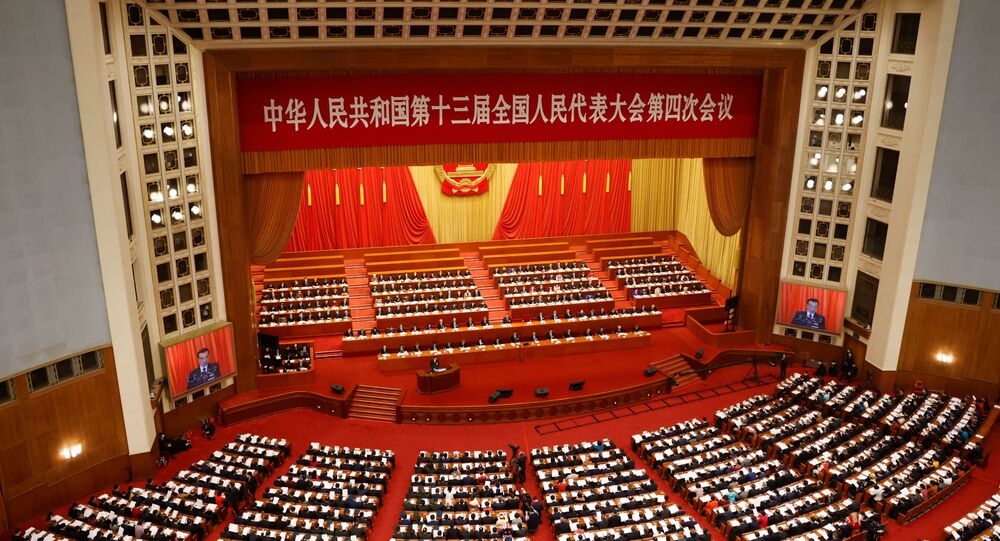 China’s military spending is the world’s second-largest after the US’ colossal budget, but in contrast to Washington’s goals of global power projection and engaging in multiple conflicts at once, the People’s Liberation Army has defined its role as fundamentally defensive.

A draft budget report issued at the opening of the annual session of China’s National People’s Congress on Friday includes another substantial military budget increase for 2021 that, while higher than last year’s increase, roughly parallels its projected economic growth.

According to the Global Times, China’s defense budget is slated to increase by 6.8% this year, to 1.35 trillion yuan ($209 billion), which is a larger growth than in 2020, when it saw a 6.6% hike. This roughly follows anticipated economic growth “above 6%” this year, according to Premier Li Keqiang, who introduced the budget proposals.

In other words, defense spending will remain at roughly 1.3% of China’s gross domestic product, which is far below the world average of 2.6% of GDP, even though Beijing has the world’s second-largest budget in terms of US dollar equivalent. By comparison, the US’ $740 billion defense budget, which does not include further discretionary bills or the nuclear weapons budget, is about 3.5% of its GDP.

"Maintaining a proper and steady increase in defense spending is needed to safeguard our sovereignty and development interests, fulfill China's international responsibility and obligations, and promote the transformation of the Chinese military with Chinese characteristics," Zhang Yesui, who served as spokesperson for the NPC session, told reporters Thursday.

"In China's case, we are committed to the path of peaceful development. Our defense policy is defensive in nature. The efforts to strengthen our national defense do not target or threaten any other country," he added.

The increase is keeping in line with plans paid out by the Communist Party of China’s 19th Central Committee plenary sessions in October, which made "making significant strides in the modernization of national defense and armed forces in the next five years" a primary goal for the country’s 14th Five Year Plan, which begins this year. That session further laid out the goal of total defense modernization by 2035.

According to Global Times, the budget hike will boost military training, preparedness and mobilization systems, as well as improve its strategic readiness by improving the military’s layout of defense-related science, technology and industry.

In terms of hardware, the People’s Liberation Army Navy is expected to debut its third aircraft carrier this year, an advanced warship with China’s first aircraft catapult that is presently under construction in Shanghai. The Navy is also looking to procure more of the large Type 055 missile cruisers and could possibly begin “movement” on the Type 054B frigate, which will feature an integrated propulsion system, according to a December Global Times report.

By 2025, the PLAN aims to have another five Type 075 amphibious assault ships in addition to its present three; eight more Type 055 cruisers; another 20 Type 054A frigates; and to have made large strides toward fielding the Type 076 assault carrier proposed last year, according to The Diplomat.

China’s J-20 stealth fighter entered mass production last year, meaning its numbers will dramatically increase this year. According to the Economic Times, Chengdu Aircraft Corporation has set up a fourth production line of J-20s, meaning the company can turn out four new aircraft every month, or 48 per year.

Global Times also reported that a new Chinese fighter jet could debut this year. The outlet speculated this to be Shenyang’s FC-31, in the past also erroneously called the J-31, another fifth-generation design believed to be the subject of new tests since June 2020 aimed at turning it into a carrier-based fighter. That would make China the only nation apart from the US to operate two fifth-generation fighters; Russia is the third nation to fly such advanced jets, but only has the Su-57 at present. Fifth-generation fighters have stealth capability, advanced radars, and “supercruise” capability, among other unique features.

In addition to these new projects, China’s hypersonic missile programs are advancing and a new stealth bomber known provisionally as the H-20 could also debut this year. Sputnik has reported on the steady development of what is likely to be an air-launched hypersonic missile carried under a modified H-6N bomber.

China’s military found itself pressed on several fronts in 2020, ranging from the tense and deadly standoff with India high in the Himalayan mountains to regular confrontations with US military aircraft and warships in the South China Sea, where the US has inserted itself into a regional dispute between several nations over overlapping island claims.

Washington has also sold an unprecedented amount of weapons to Taiwan, an autonomous island just off the coast of mainland China that Beijing considers to be a province in rebellion. A new national defense law implemented in June, which for the first time included Hong Kong Autonomous Region, also prompted sanctions from Washington and denunciations of what the Trump administration called the city’s loss of autonomy.

In terms of long-term strategy, it is now clear that the United States considers China its primary adversary. Numerous documents from the National Security Council, the Pentagon, and the US State Department confirm this strategic shift, and the administration of US President Joe Biden has verified it will not only continue the path staked out by former US President Donald Trump, but even expand it.

Amid accusations by the US and its allies that Beijing was seeking aggressive confrontation and expansion, China’s new National Defense Law that took effect in January specifically articulated the military’s defensive nature, which Zhang rearticulated in his Thursday comments.