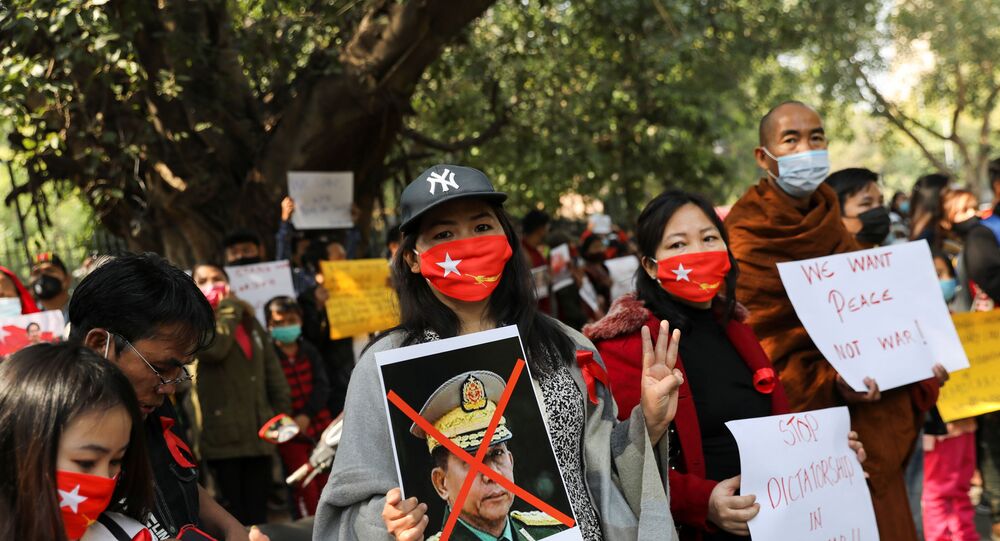 On Monday, Myanmar's military detained State Counsellor Aung San Suu Kyi and President Win Myint as well as other prominent politicians during a series of raids.

Myanmar’s National League for Democracy (NLD) has signalled its support for a civil disobedience campaign, in a move that came a few days after NLD leader Aung San Suu Kyi was arresed by the military.

In a statement on Friday, the NLD condemned Aung San Suu Kyi’s arrest as "unacceptable", adding that they had a duty to extend assistance to all those who had been penalised for opposing the military takeover in the southeast Asian nation.

The NLD earlier said that Aung San Suu Kyi is in good health as she remains under house arrest.

HOPE OF MYANMAR
WE TRUST OUR LEADER

Let's fight until the last minute of ours future !

The remarks come a day after the UN Security Council (UNSC) issued a statement, in which it expressed alarm about the military coup in Myanmar, calling for an immediate release of the detained senior government officials.

"The members of the Security Council expressed deep concern at the declaration of the state of emergency imposed in Myanmar by the military on 1 February and the arbitrary detention of the government, including State Counsellor Aung San Suu Kyi and President Win Myint and others. They [the UNSC members] called for the immediate release of all those detained”, the statement pointed out.

Please listen to the real voices of our Myanmar people. We never want to go back into the dark. We only believe in Daw Aung San Su Kyi for the future of Myanmar (Burma). #HearTheVoiceOfMyanmar #WeNeedDemocracy pic.twitter.com/s5hzeqFdCY

This followed Pentagon Press Secretary John Kirby telling reporters on Tuesday that the US Defence Department does not see the need for the American military to have a role in Myanmar.

"I don’t believe we foresee right now with what’s going on there a US military solution or action required. We certainly have viewed with great alarm what has happened in Burma [Myanmar] but I don’t see a US military role right now”, Kirby said.

© REUTERS / STRINGER
Myanmar Military Gov't Will Try to Put Some Order in Social and Political Life, Analyst Says
Myanmar's military previously arrested the government and declared a one-year state of emergency in the country, saying that the November 2020 vote was fraudulent and promising to "hold a fair election" when the emergency ends.

The country’s armed forces also announced the creation of a State Administrative Council chaired by senior general Min Aung Hlaing, according to The Myanmar Times.

Situation in Yangon After Military Seizes Power in Myanmar