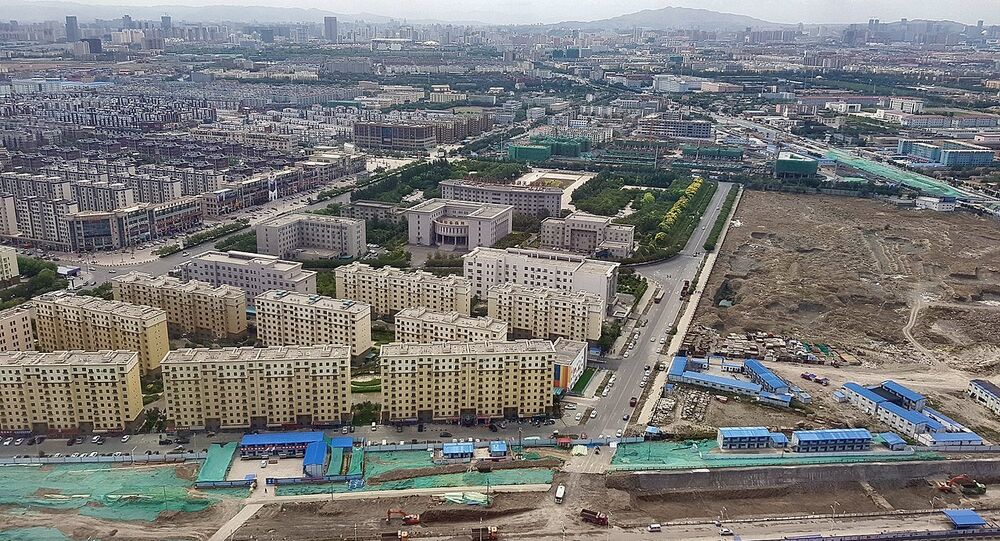 The measures will be reportedly the largest case in the history for US Treasury office, with sanctions set to impact banking loans, farming imports and investments for the major Chinese conglomerate.

The Xinjiang Production and Construction Corps (XPCC) has been targeted by the US Office of Foreign Assets Control (OFAC) in a fresh round of sanctions amid the ongoing trade war, the South China Morning Post reported on Monday.

Three officials along with the Chinese conglomerate were hit with sanctions after Washington accused it of human rights abuses in China's westernmost region, the report read.

The officials - Peng Jiarui, Chen Quanguo and Sun Jinlong - were placed on a Specially Designated Nationals and Blocked Persons list, banning US individuals and firms from doing business with the Chinese giant and its subsidiaries.

© AFP 2021 / Kirsty Wigglesworth
End Of The 'Golden Era': 5 Times UK-China Ties Have Soured Since The Cameron-Osborne Relations Thaw
The XPCC has numerous operations in farming, construction and infrastructure, among others, and does business with over 800,000 firms in 147 countries, according to the report.

The move could also hurt China's cotton production and tomato production in a bid to block the world's largest tomato exporter from doing business with other countries, it added.

The news comes after the OFAC sanctioned the XPCC in July, along with former company political commissioner, Sun Jinlong, and deputy party secretary and commander Peng Jiarui, executive order (EO) 13818 along with the Global Magnitsky Human Rights Accountability Act.

“As previously stated, the United States is committed to using the full breadth of its financial powers to hold human rights abusers accountable in Xinjiang and across the world,” treasury secretary Steven T. Mnuchin said at the time.

The firm mainly employs Han Chinese, who make up roughly 40 percent of 22m people in Xinjiang, the report added.

The report accused the Chinese government of detaining up to one million Uyghurs in camps across the autonomous region despite admitting there was "no official data" on the matter.

© AP Photo / Ng Han Guan
Ab-CERD: UN Report Linked to US Color Revolutionaries Trying to Undermine CPEC
The accusations were slammed by several Chinese officials, including Chen Xu, ambassador to the UN in Geneva, who said that authorities were tackling Islamic radicalisation as well as "anti-terrorism and anti-secession" in Xinjiang.

A joint statement signed by 53 nations including Belarus backed China's efforts to fight radical extremism and added the security efforts had boosted prosperity and stability in the region, resulting in a halt of terrorist attacks in a three-year period.

But US lawmakers passed the Uyghur Human Rights Policy Act 2020, which launched sanctions targeting Xinjiang government chief Chen Quanguo, who also oversees the XPCC, as well as other officials in the region's security bureau.

The move was slammed by Chinese foreign ministry spokesman Wang Wenbin, who said in early August that the XPCC had made major contributions to security and ethnic unity in Xinjiang.