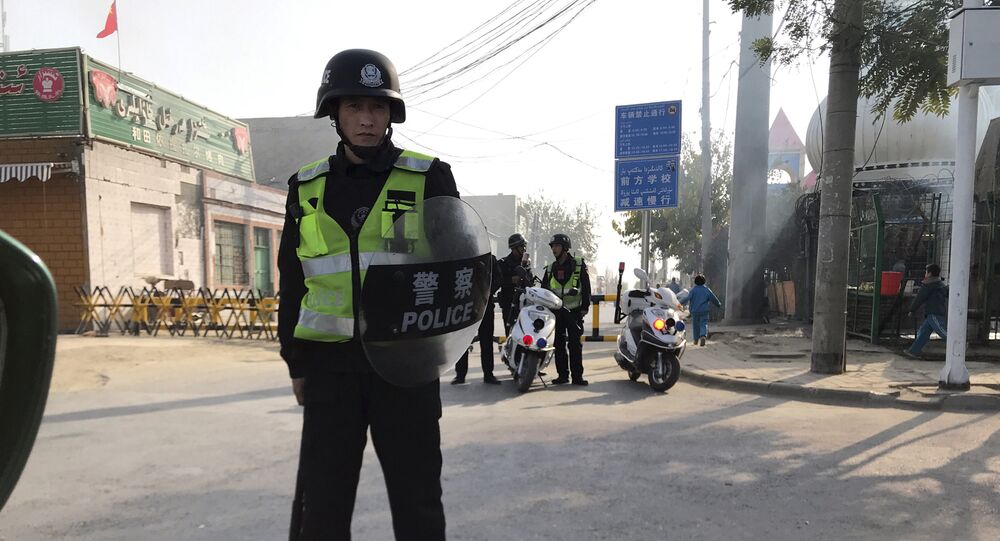 A UN committee tasked with fighting global human rights abuses is the latest participant in US-backed regime change efforts against China and its partners. One must question the unscrupulous nature of the accusers and dig deeper into the history and rhetoric behind their recent UN report.

Under the vaguely-defined pretext of 'protecting human rights' and 'fighting racism and inequality', the committee urged China to expand "special measures to reduce high levels of poverty and related inequality among affected ethnic minorities," and "further strengthening basic infrastructure and public services in predominantly ethnic areas, including rural areas."

"Numerous reports of detention of large numbers of ethnic Uighurs and other Muslim minorities held incommunicado and often for long periods, without being charged or tried, under the pretext of countering terrorism and religious extremism," the report alleged, admitting that "there is no official data" on how many people stayed in long-term detention or who had spent time in political re-education camps. Detainees range from "tens of thousands" to "one million," the report continued.

A letter from US senator Mark Rubio addressed to US Secretary of State Mike Pompeo and US State Secretary of the Treasury Steve Mnuchin urged US lawmakers to impose sanctions on China for what purports "a high-tech police state in the XUAR", calling it a violation of privacy and human rights.

The letter raised detention figures to hyperbole, citing "a million or more Uyghurs and other Muslim ethnic groups" and calling the matter "truly breathtaking" as quoted by US representative to the UN economic and social council, ambassador Kelley E. Currie.

Rubio also advised lawmakers to sanction Chen Quanguo, XUAR Communist Party Secretary, as well as other Xinjiang official using the Global Magnistky Human Rights Accountability Act and Executive Order 13818, which uses geopolitical targets accused of being "responsible for or complicit in, or to have directly or indirectly engaged in, serious human rights" abuses.

In response, Chinese foreign ministry spokeswoman Hua Chunying issued an August 30 press statement highlighting a laundry list of domestic US human rights abuses, stating that "US lawmakers have no right to make these unwarranted accusations on ethnic minority issue against China."

"The conclusion will be drawn that China's policies and record in this regard are actually far better than the US," she told reporters, citing a State Council Information Office report detailing "various problems facing the US in terms of racial discrimination and human rights protection."

She assured reporters that the Chinese government protects its citizens religious freedoms in accordance with the law, and hoped that US lawmakers would recognize their efforts.

Hua also demanded that US lawmakers should "focus on doing their job" instead of "poking their noses in other countries' domestic affairs" and "acting as some kind of 'human rights judge' to make groundless accusations, or even threatening to impose unreasonable sanctions."

The March 9 report documented significant US human rights abuses, including having the second-highest prisoner rate (693 per 100,000), an inmate population of roughly "2.2 million people, and 58,125 gun violence incidences, including 385 mass shootings" which have killed 15,039 and injured 30,589, citing official 2016 statistics from the Gun Violence Archive.

"Wielding 'the baton of human rights,' it pointed fingers and cast blame on the human rights situation in many countries while paying no attention to its own terrible human rights problems," the report stated.

The organization charged with the initial report, The Uyghur Human Rights Project (UHRP), "was founded by the Uyghur American Association (UAA) in 2004 with a supporting grant from the National Endowment for Democracy (NED)," the organization's website reads.

It claims to "promote human rights and democracy for the Uyghur people," and raises awareness of abuses reported in 'East Turkestan', the unrecognized nation coined by Uyghur separatists.

The NED and its affiliate Independent Republican Institute (IRI) has been the vanguard of US-sponsored regime change, according to independent journalist Stephen Lendman. Late US senator John McCain [R-AZ] chaired the IRI for 25 years, from 1993 to 2018.

The subversive organization has fomented civil unrest in Nicaragua, Venezuela, Myannmar, Ukraine, Syria, and many others by politicizing alleged human rights abuses in sovereign nations, inciting fringe elements to revolt, and using US-backed insurgents to cause chaos.

"Any non-profit organization that takes donations could be influenced by their donors," Independent Institute Center on Peace and Liberty Director Ivan Eland told Sputnik. "Human Rights Watch is no different than any other non-profit."

Several news sources have reported on human rights abuses, either by offering scant or incredulous statistics, or using individual accounts of alleged abuse.

US media outlet Radio Liberty, long tied to US intelligence services including the CIA, documented the experiences of Turpan-resident Omirbek Bicaly.

"My husband Omir went on a business trip for three days in the city of Urumqi in China on March 23, 2017. He participated in the event, which took place there," Omirbek Bicaly's wife claimed. "When he arrived there, he was arrested and taken to Karamay."

"Two months passed, from him there was no news, he is in custody."

"Those who disobeyed the rules, refused to be on duty, engaged in fights or were late for studies were placed in handcuffs and ankle cuffs for up to 12 hours," he said.

Wang's HRW articles date back to 2014, beginning with the Umbrella Revolution in Hong Kong, or Occupy Central movement, long suspected by Beijing of having US and UK ties.

The allegations come as Chinese authorities are busy constructing the China-Pakistan Economic Corridor, which will pass through XUAR via a rail and road project to Kashgar and continue onward to Pakistan's Gwadar port city. The Chinese have pledged $62 billion in infrastructure projects, the Express Tribute reported in April 2017.

Pakistan's long-term CPEC report acknowledges the project's importance, which starts "from Kashgar in Xinjiang, China, and reaching Karachi and Gwadar, southern coastal cities in Pakistan via the Khunjerab Pass and several other nodal areas," and plans to cement China-Pakistan relations, promote friendly bilateral ties, and establish "the shared destiny of the two countries."

The Chinese government also plans to invest in the TAPI pipeline, which will support energy security between Turkmenistan, Afghanistan, Pakistan, and India. The $9.6 billion pipeline will span 1,840 km from Turkmenistan's Galkynysh gas field and will transport 33 billion cubic meters of gas annually by the beginning of 2020.

Newly appointed Pakistani prime minister Imran Khan and foreign minister Shah Mehmood Qureshi have also vowed to bring their nation out of isolation and forge closer ties to Afghanistan and India, challenging US terrorism policies within the region.

"There will be no peace in Pakistan without peace in Afghanistan," Qureshi told reporters. "I want to tell people of Afghanistan to understand each other's problems and bilaterally try to solve all issues."

A Chinese-led west Asia via Turkmenistan, Afghanistan, Pakistan, and India, in conjunction with new political developments in Syria, Iraq, and Iran, will effectively end US control of the region. The CPEC also ‘threatens' to tackle underdevelopment in each country and will undermine US efforts to exercise its post-911 control over western Asia.

The State Department's efforts to 'promote democracy' in these territories are wholly rubber-stamped by color revolutionaries-men and women who are far from champions for democracy.

India & Pakistan: From Rivalry to Rapprochement?