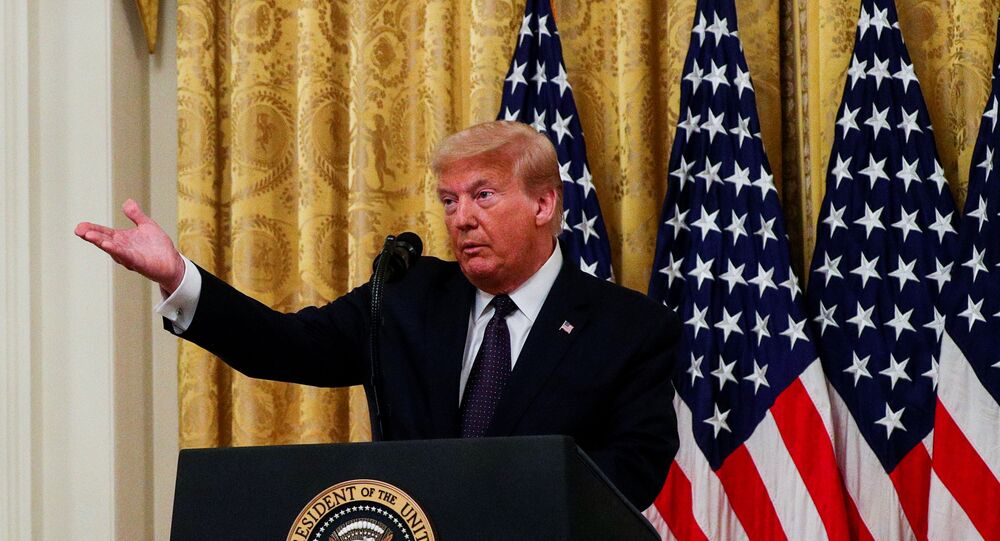 The act is set to impose sanctions against entities and individuals in China that are allegedly responsible for "human rights abuse" against Uighur Muslim population in Xinjiang, which China repeatedly denied.

US President Donald Trump signed Uyghur Human Rights Policy Act of 2020 on Wednesday, calling for imposing sanctions on those who are, according to ungrounded US claims, are responsible of repressions against Uyghur Muslims in China's Xinjiang province, the White House announced in a statement.

"On Wednesday, 17 June, 2020, the President signed into law... the “Uyghur Human Rights Policy Act of 2020,” which condemns gross human rights violations of specified ethnic Muslim minority groups in the Xinjiang region in China and other purposes, including specified authority to impose sanctions on certain foreign persons", the statement said.

In a separate statement, President outlined that the Act will be "holding accountable perpetrators of human rights violations", citing "systematic use of indoctrination camps, forced labor, and intrusive surveillance to eradicate the ethnic identity and religious beliefs of Uyghurs and other minorities in China".

He also noted that one of the Act's section "purports to limit my discretion to terminate inadmissibility sanctions", saying that this limitation could be "inconsistent" with his constitutional authorities, and therefore his Administration will be treating this section as "advisory and non-binding".

"In some circumstances, this limitation could be inconsistent with my constitutional authorities to receive as diplomatic representatives certain foreign officials under Article II, Section 3 of the Constitution. Accordingly, my Administration will treat section 6(g) of the Act as advisory and non‑binding", Trump said in a statement.

The legislation comes amid accusations from US State Department towards China of "discrimination" and "genocide" against the Uighur Muslim minority in Xinjiang, while Beijing critics slammed the official Vocational Education and Training Centres as "re-education camps", where Uyghurs were hold by China under the pretext of fighting religious extremism.

China has repeatedly denounced the accusations, insisting that the country complies fully to International Convention on the Elimination of All Forms of Racial Discrimination.