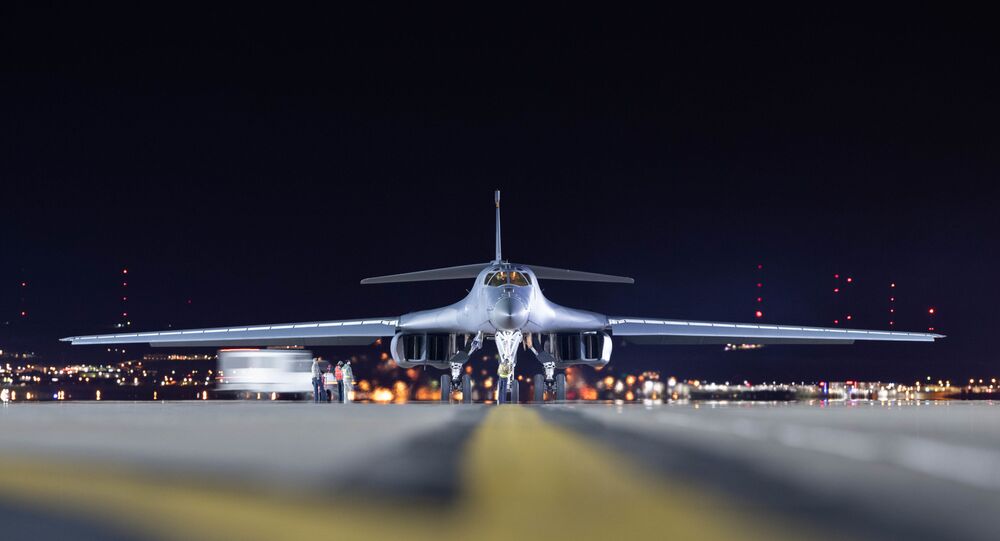 In its second such deployment in nearly a week, the US Air Force sent two B-1B Lancer supersonic bombers halfway around the globe to the South China Sea, where US and Chinese forces have increasingly rubbed shoulders in recent days, including the ejection of a US warship from contested waters.

Earlier this week, two US Air Force B-1B Lancer bombers made a 32-hour round-trip flight from South Dakota “to conduct operations over the South China Sea” as part of a bomber task force mission, the Air Force announced on Thursday.

“This operation demonstrates the US Air Force’s dynamic force employment model in line with the National Defense Strategy’s objectives of strategic predictability with persistent bomber presence, assuring allies and partners,” the release stated. The Pentagon has moved to adopt the “dynamic force employment” system as a way of keeping its adversaries off guard by breaking up routine deployments and force movements.

One bystander in Washington State seemed to spot the two Lancers near the KC-135 aerial refueling aircraft, posting photos on Twitter Thursday evening.

B-1 right behind the KC-135R. pic.twitter.com/rQnEkNRoeI

​This is the second time in nearly a week the US Air Force has sent Lancers on a dramatic, globetrotting intimidation flight. On April 24, Sputnik reported that a Lancer had flown to Japan and joined a slew of US and Japanese fighters in drills over the Sea of Japan, just a few hundred miles from where North Korean leader Kim Jong Un was believed to be convalescing after surgery. The 30-hour surprise flight was also operated out of Ellsworth.

Wednesday’s South China Sea visit, however, happened amid a much more tense situation.

On Tuesday, Sputnik reported, citing Chinese media, that People’s Liberation Army Navy (PLAN) forces had expelled the US destroyer USS Barry from waters near the Paracel Islands, an island chain in the South China Sea claimed by both China and Vietnam.

Chinese air and naval forces “expelled a US warship that trespassed into Chinese territorial waters off the Xisha Islands in the South China Sea as the US' move could have easily caused an accident,” the Global Times wrote, using the Chinese name for the island chain. The message came with a taunt, urging the US to focus on the COVID-19 outbreak at home, rather than engaging in overseas provocations - an echo of messages sent to Beijing for months following military encounters.

The US later admitted to the Barry’s transit, calling it a “Freedom of Navigation Operation” (FONOP), a type of mission in which US and allied warships flaunt the territorial claims of nations like China by behaving as if their claimed territorial waters are actually international waters. This was the Barry’s second such mission in a week, as it had left its battle group in the South China Sea just days earlier to sail through the Taiwan Strait, which Beijing regards as internal waters.

Another warship in the battle group, the destroyer USS Bunker Hill, performed another FONOP the following day in the nearby Spratly Islands, another archipelago claimed by China.

"Reality has proven once again that the US is the biggest facilitator of the militarization of the South China Sea, and is a trouble-maker for the region's peace and stability," Ministry of National Defense spokesperson Senior Colonel Wu Qian told reporters on Thursday, China Daily reported.

"The PLA will remain on high alert, and adamantly safeguard national sovereignty, security, and development interests, as well as the peace and prosperity of the region,” Wu noted.

Wu noted the US Naval Institute had published a proposal earlier in April calling for Washington to issue letters of marque to privateers as a method of countering Chinese naval forces in the South China Sea, which he called “an act of piracy.”

"These actions are criminal activities explicitly prohibited under international laws, and will absolutely receive joint opposition and severe backlash from the international community," Wu said.