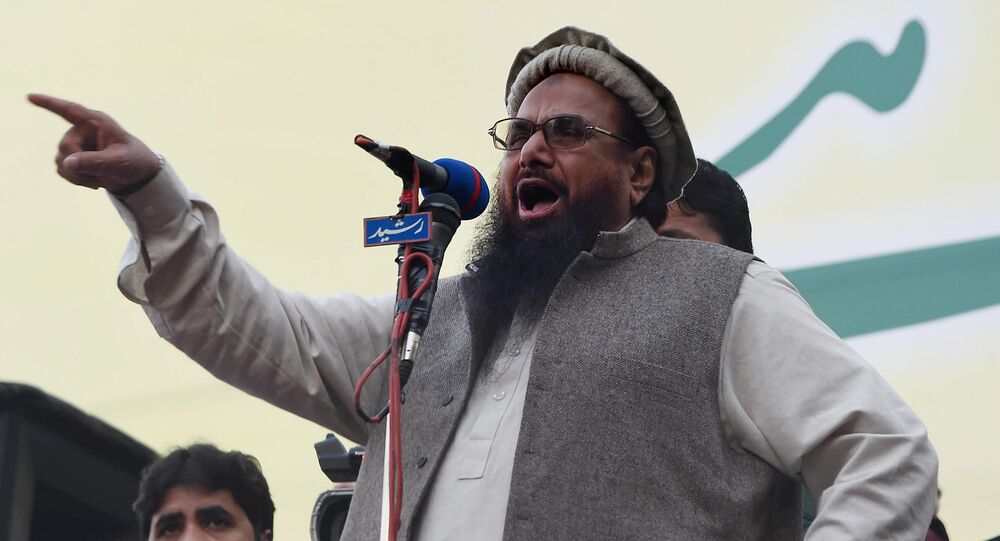 New Delhi (Sputnik): In April this year, the Imran Khan Government took stern steps against the organisations proscribed under the UN and arrested over 100 people linked with them. Prime Minister Khan on several occasions reiterated that his government will not allow the militant mindset to take over the country.

In a significant setback to the banned Jamaat-ud Dawa (JuD), including its chief Hafiz Saeed and key member Naib Emir Abdul Rehman Makki, the Lahore High Court has dismissed a petition seeking abrogation of terror financing charges on Monday.

Saeed, a wanted terrorist in India, and his 13 other associates have been seeking to quash their name from the 23 first information reports (FIRs) registered against them on charges of terror financing on 3 July this year.

Lawyers, representing the government, contended they have enough evidence against them (JuD members), in the case related to terror financing and money laundering under the Anti-Terrorism Act, 1997.

The country's Counter-Terrorism Department (CTD) had registered the cases in five cities in Punjab province, accusing the JuD of financing terrorism from massive funds collected through non-profit organisations and trusts including the Al-Anfaal Trust, the Dawatul Irshad Trust, the Muaz Bin Jabal Trust, and others.

Pakistan had also set up a Financial Action Task Force (FATF) cell to ensure the timely implementation of measures against terror financing carried out through currency smuggling.

To implement the national action plan, Pakistan's Interior Ministry has arrested and or detained over 100 people linked to the proscribed organisations including JuD, Lashkar-e-Taiba and the Falah-i-Insaniyat Foundation (FIF).

The National Action Plan is an action plan that was established by the Government of Pakistan in January 2015 to crack down on terrorism.