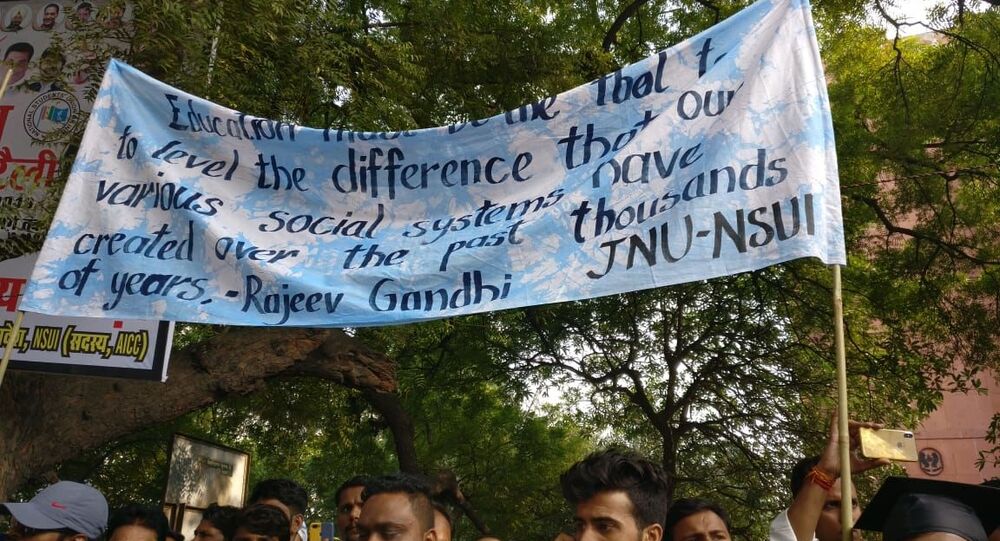 New Delhi (Sputnik): Indian academics fear that taking into account the current trends in the educational sector the country could soon lose the level of quality and eminence due to a lack of funds, leading to privatisation of the sector.

Students from three premier institutions in New Delhi – Jawaharlal Nehru University (JNU), University of Delhi, and Indian Institute of Mass Communication held a protest sit-in in the national capital against a hike in fees and budget cuts to educational institutions.

Students from JNU have been on the warpath against hikes for various things. Now they have hit the streets to protest an alleged cut to the education budget. They claimed the central education sector was suffering due to massive budget cuts, with universities facing a severe crunch in funding.

University officials have said the fee had to be increased to offset the fund crunch due to limited budgets.

Similarly, students from the Indian Institute of Mass Communication, a state-run institution that specialises in journalism in New Delhi have been protesting against the high tuition fee and "unruly" hostel and mess charges.

During the protest on Tuesday, students chanted slogans against the government, saying it “could not give education, security, or employment”. They were demanding a rollback of the fee hike, restoration of budgets in education sector and enough funds for the education institutes.

Meanwhile, teachers from another federally-administered university in the national capital – University of Delhi are demanding the regularisation and promotion of ad-hoc teachers. Reports suggest the teachers were not being promoted or regularised because the university did not have enough funds to hire them on regular rolls.

The federal government has not issued any directions to central universities to hike fees, human resource development minister Ramesh Pokhriyal "Nishank" told Lok Sabha, the lower house of the Indian Parliament on Monday.