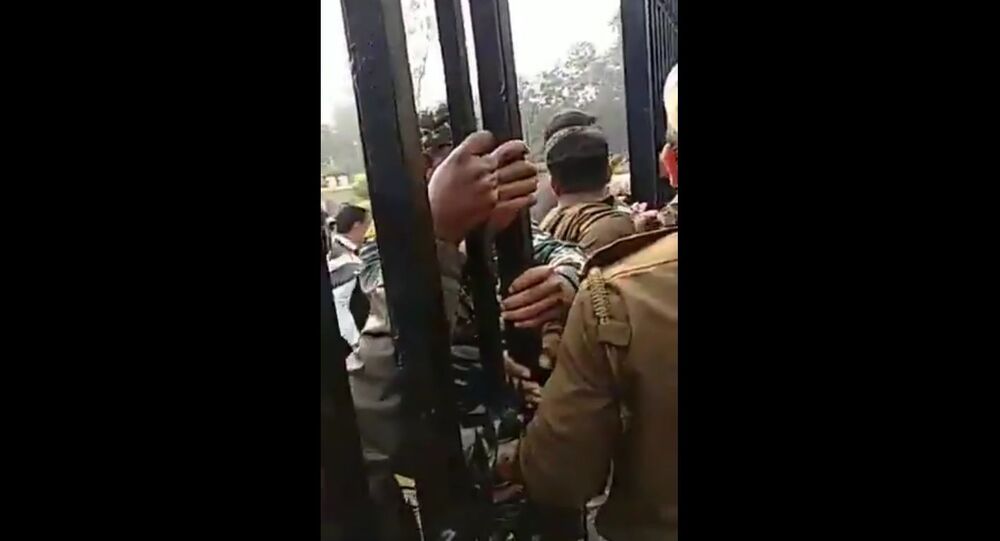 New Delhi (Sputnik): With teachers of Delhi University demanding the rollback of a circular issued on 28 August which allegedly puts an end to the appointment of ad-hoc teachers, the university’s north campus area is witnessing a tense situation after heavy police were deployed to prevent any unrest.

Over 5,000 teachers and professors have been protesting against the decision of the Delhi University administration to appoint guest-teachers instead of making ad-hoc (temporary) ones permanent.

The demonstrators have been made to stay off the vicinity of vice-chancellor’s office, situated near Delhi University Ground since Wednesday.

According to the teachers, Vice-Chancellor Yogesh Tyagi has made no efforts to meet the representatives of the DUTA and they will continue protesting till their demands are met. The teachers also said they will boycott their official duties as well.

On Thursday morning, paramilitary and police forces were deployed to Delhi University, where they were stationed with water cannons. The forces were seen forcibly evicting the teachers, who were trying to barge into the office of the vice-chancellor.

Matter at #DelhiUniversity escalates, teachers being forcefully evicted. This is the outside, there are many who are sitting inside the Vice Regal lodge. Notice has been issued by the proctor to the teachers. pic.twitter.com/Xo7AYnX5jB

On Wednesday, teachers broke three gates of a building housing the vice chancellor’s office and allegedly painted graffiti on the building.

#DUTA:- VC wants to destroy #DU by removing 4500 AdhocTeachers nearly half a strength of teachers.
After #JNU, #IIMC it is now #DU Campus.
Teachers are protesting at VC building and demanding #withdraw28thaugustDUfarman pic.twitter.com/6s1kxRk66b

​Following the continuation of a day-long massive protest against the non-payment of salaries for several months involving hundreds of Delhi University teachers, Ministry of Human Resource Development (MHRD) officials are set to meet the DUTA on Thursday evening to bring a solution to the issue.

“DUTA officials have been called in MHRD office at 4’O clock in evening today so that matter can be resolved,” said Rajesh Jha, a Delhi University Professor.

Through the August 28 letter, the university administration replaced 5,000 teachers without any amendment to the University EC resolution of 2007.

The vice-chancellor had circulated a letter to the DU Principal’s Association (DUPA) stating that the appointment of ad-hoc teachers as faculty members will be stopped.

Instead, the appointment of guest lecturers – who would be paid on an hourly basis – would be encouraged. The DUTA learnt about the circular only after it was leaked on social media.

Teachers and Students Protest Against Educational Reforms in Paris (VIDEO)