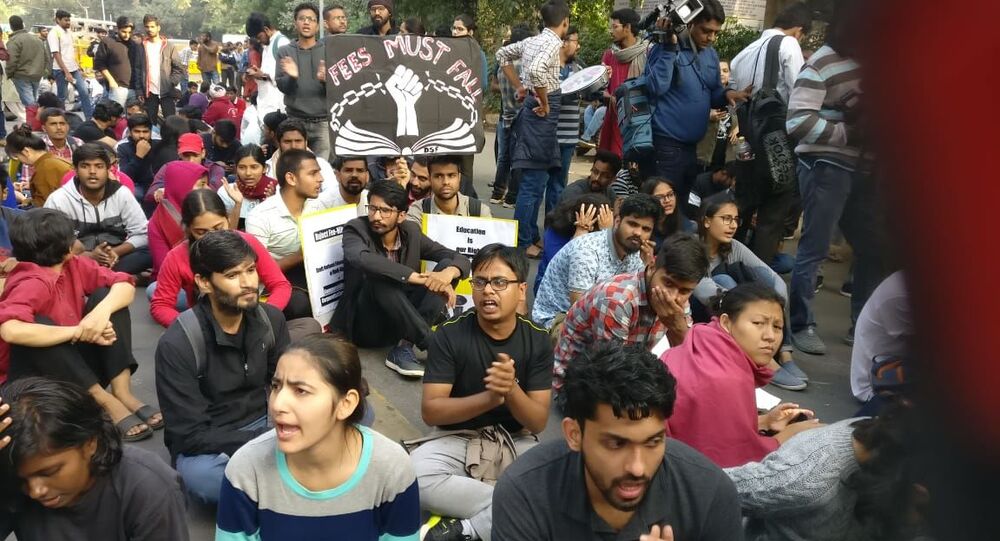 New Delhi (Sputnik): There has been an ongoing tussle between the government of India and students from various universities, especially from the country's leading educational institution, Jawaharlal Nehru University (JNU), who allege the present dispensation ruling in the country is “anti-student”.

Students from several universities and members of prominent student organisations, including the All India Students Association and Students’ Federation of India, staged a protest outside the Parliament in India’s national capital city on Friday.

In the video, students can be seen chanting slogans: “Fee hike se Azaadi” ("We want freedom from fee hike").

Students can be seen holding placards that read: “JNU Vice-Chancellor (Mamidala Jagadesh Kumar) should resign”; “Hostel fee hike in JNU would eliminate 40 percent of the students”.

The protesters are demanding a complete roll back of the 400 percent-hike in hostel fees for Jawaharlal Nehru University that was partially abandoned earlier this month.

Under a recently proposed scheme for economic assistance by JNU’s executive committee for students below the poverty line, the rent for a double-bed room, which was earlier hiked from $0.14 (Rs. 10) per month to $4 (Rs.300) per month from, has been cut to $2 (Rs.150) per month.

The JNU Students' Union, however, wasn't satisfied with the "major rollback", and vowed to proceed with the strike, as the proposal, it said, was only for the Economically Weaker Section (EWS) of students.

Earlier this month, the students from JNU, who have been protesting for nearly a month now, were stopped from continuing their protest march to Parliament. The government had imposed Section 144, prohibiting the assembly of four or more people in an area, something which prompted the students to demand the resignation of Indian Education Minister Ramesh Pokhriyal.