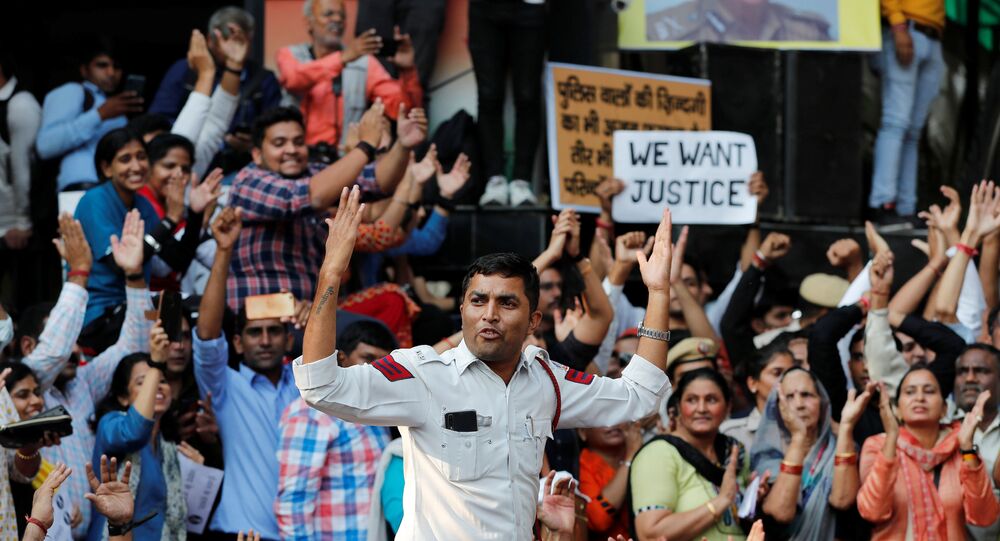 New Delhi (Sputnik): Days after police and lawyers clashed at a local court in India’s national capital, leaving two lawyers with bullet injuries and a high-ranked woman police officer allegedly harassed, women lawyers say life is not business as usual in public places for them anymore.

Women lawyers in New Delhi, India claim they have started experiencing the social repercussions of the lawyer vs police clashes in the city.

According to them, it has become quite uncomfortable to move around on the streets, as they are viewed as goons by many or even criticised for taking the law into their own hands.

Lawyer Neha Jain has revealed that following the incident it’s not only police personnel who are feeling unsafe but attorneys as well.

“Female lawyers, especially, are facing the heat of the post-clash. When we walk on the streets, people have started labelling us as goons. I have heard people saying ‘Coat Waale Gunde Aa Gaye’ (goons in lawyer robes have arrived). We were not even a part of that incident. However, whatever happened was wrong,” Jain said.

Another woman lawyer Tanya Aggarwal said that her family is also feeling the aftershock, as they often hear that they have a hooligan inside their house.

“My mom tells me that people still talk about that incident and label the legal community as goons. They also say statements like ‘Ye Gunde Kya Humme Justice Dilwaaege’ (how will these goons help us in getting justice), ‘Democracy Ke Naam Per Dhabba Ho’ (You are a scar on democracy),” she said.

But she admitted to gradually getting used to such remarks.

“We have now stopped reacting to such comments. Despite the fact that the entire incident has taken an ugly turn, we just feel that the cops should not have opened fire on the lawyers. It was just parking and it could have been solved then and there,” Aggarwal added.

Another lawyer, requesting not to be named, stated that her mother worries, as she usually returns home late.

“Until the time I’m home, my mother stays worried as to will the cops help me in case I’m in trouble on the roads or not. The police personnel are against us (lawyer fraternity) and security forces are not even deployed at the court. Following the incident, the same thought has also settled in my mind,” she said.

On 2 November, a minor argument over the parking of a vehicle between a lawyer and some policemen at the Tis Hazari court complex in Delhi flared up and led to violence and arson. It also left a lawyer with a bullet injury.

Lawyers in six District Courts have been on strike to protest against the clash with the Delhi Police, demanding the arrest of the policemen who allegedly fired at their colleagues during the clash.

In an unprecedented protest by the Delhi Police, thousands of its personnel had literally laid siege outside police headquarters for 11 hours on 5 November and staged a virtual revolt, sparked by two attacks on their colleagues by lawyers.

The lawyers’ strike continues, as a meeting of members of all district courts associations, representatives of the Delhi Police and Delhi’s Lt. Governor Anil Baijal held on the orders of the Delhi High Court, could not resolve the matter.

Meanwhile, a video of a senior female Indian Police Services officer supposedly being roughed up by the lawyers at Tis Hazari court has come to light.

In the video Deputy Commissioner of Police (DCP) Monika Bhardwaj can be seen pleading with lawyers with folded hands to stop creating a ruckus. The lawyers are seen purportedly harassing her. She started running while a few lawyers tried to catch hold of her, while some policemen shielded her from the agitated lawyers.

#WATCH: CCTV footage of DCP North Monika Bhardwaj pleading before the lawyers to stop violence when a clash broke out between police and lawyers at Tis Hazari Court in #Delhi on November 2. pic.twitter.com/xFWZBP3Swp