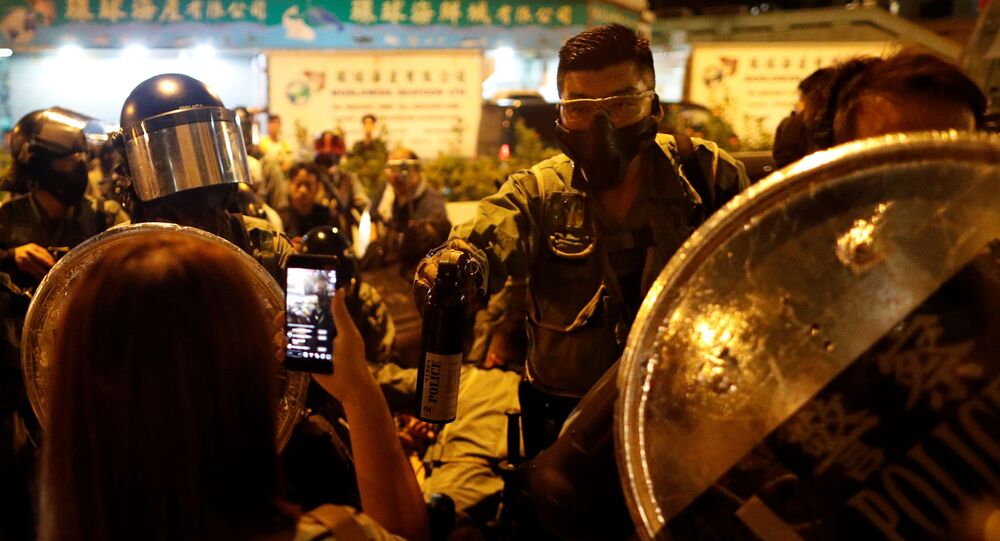 Tech giant Apple reportedly cited the encouragement of illegal activity as the reason behind its app store’s rejection of HKMap Live, a crowdsourced, emoji-packed map designed to track police presence in Hong Kong and reportedly level the playing field between protesters and authorities.

The popular, volunteer-based web application HKMap Live is unlikely to receive an iOS widget any time soon, based off Apple’s rejection memo delivered to the service’s developer on Tuesday.

"Your app contains content - or facilitates, enables, and encourages an activity - that is not legal ... Specifically, the app allowed users to evade law enforcement,” the tech giant reportedly told the developer.

"Your app contains content - or facilitates, enables, and encourages an activity - that is not legal ... Specifically, the app allowed users to evade law enforcement."@Apple assume our user are lawbreakers and therefore evading law enforcement, which is clearly not the case.

Many accused Apple of hypocrisy after HKMap relayed the rejection. Twitter user @DonParkison questioned if the company would remove apps such as Waze - which provides real-time GPS navigation - from the store, as they could also be used to help people “evade law enforcement.”

Twitter user @Pinboard also brought up the fact that the HKMap app highlights areas where police have declared an “illegal assembly,” which could assist everyday Hongkongers in avoiding “legal jeopardy.”

I can't stop tweeting because I'm so angry (this should be the site motto). Another thing the map shows is when police raise a blue flag for ILLEGAL ASSEMBLY. Wandering into this puts you in legal jeopardy, a potential 5-10 year jail sentence. And the police don't want you there!

“Everything can be used for illegal purpose on the wrong hand. Our App is for info, and we do not encourage illegal activity,” the web app’s Twitter account said Wednesday.

Unfortunately, HKMap’s philosophical argument and its comments on Waze have not been enough to sway Apple into even issuing a reply.

The developer, a 20-something financial professional identified only as Kuma, told Quartz last month that as police-protester clashes continue to escalate across Hong Kong, he wants to level the playing field between authorities and demonstrators.

“The huge asymmetric information between protesters and officers led to multiple occasions of surround and capture,” the developer told the outlet in September, adding that he created the app following the arrest of several of his close friends.

Though anyone can post police and protest-related information on the web app, it’s up to a volunteer-based group of moderators to sift through the data and cross-reference it with live streams and other sources before it appears as a verified advisory on the map. Those who abuse the system and consistently report false information can be banned from posting and accessing the service.

The developer did note to Quartz that “there are always speed-accuracy trade-offs,” and the spread of misinformation is almost inevitable in this day and age, especially when attempting to provide civilians and demonstrators with relevant information in real time.