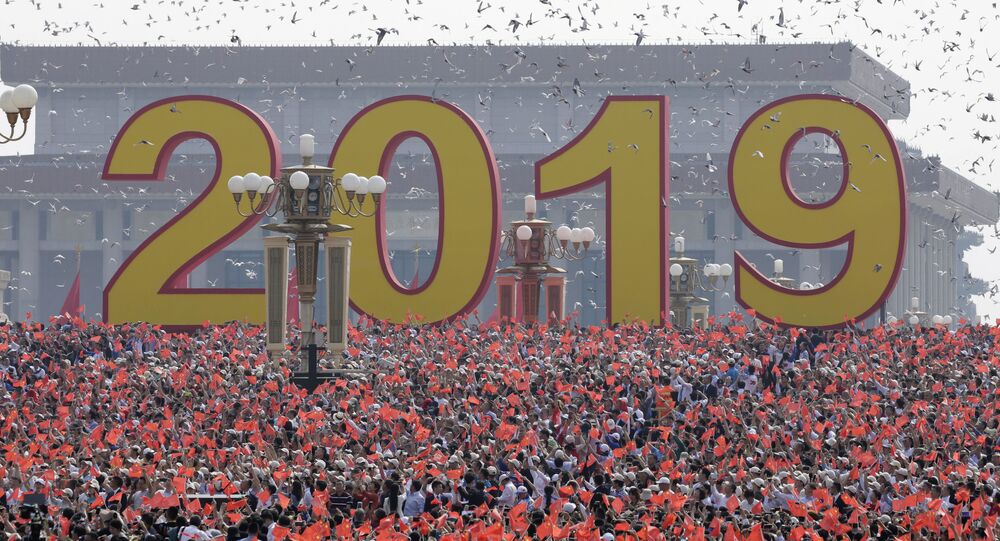 While October 1 marked the 70th anniversary of the founding of the People’s Republic of China, Western media chose to mask the country’s successes and military developments and instead highlight Hong Kong protests and the increased public unrest that some say were elevated by the outside powers.

Tens of thousands of people flocked to Beijing’s Tiananmen Square on Tuesday to attend China’s National Day Parade and celebrate the anniversary of Mao Zedong’s 1949 founding of the republic.

However, there was another spectacle occurring nearly 2,000 kilometers south of Beijing in the semi-autonomous city of Hong Kong, which returned to Chinese rule in 1997 after having been a British colony for more than 150 years.

Over 50 people were injured and dozens were arrested after protesters dressed in black took to the streets for a number of “national grief” marches across the semi-autonomous city, according to TIME.

In addition to the Hong Kong Mass Transit Railway (MTR) authority shutting down a number of subway stops - possibly to avoid a situation similar to the August 31 Prince Edward MTR situation that sparked murder rumors - the Hong Kong government’s legislature was evacuated after being bombarded with petrol bombs by protesters.

However, it was the non-fatal shooting of a teen that caught the eye of Western media, which ran with the story and erroneously reported that an 18-year-old was shot in the chest, rather than the shoulder.

When asked why the officer resorted to firing a live round at the teenager, police chief Stephen Lo Wai Chung stressed that the situation occurred quickly and said his officer “did not decide the distance between him and the assailant.” The officer who fired the weapon was also equipped with a rubber bullet rifle.

Though a total of six live rounds were fired by the Hong Kong Police Force on Tuesday, authorities are only aware of the one injury.

John Ross, senior fellow at Chongyang Institute, Renmin University of China and an award-winning resident columnist with several Chinese media organizations; and Jude Woodward, author of the book “The US vs China: Asia's new Cold War?,” joined Radio Sputnik’s Loud and Clear on Tuesday to discuss the Western media’s reaction to the military parade versus the demonstrations in Hong Kong.

Ross told host Brian Becker and producer Walter Smolarek that the US should not continue to underestimate China’s progress in the past 70 years, particularly when it comes to their health advances, as “life expectancy is the best indication of social conditions”

“If the United States continues to spread straightforward lies about [China’s life expectancy] situation, this creates danger, primarily, for the United States. I think it’s one of the reasons China staged a military parade,” he said in response to the New York Times headline “Xi Extols China’s ‘Red’ Heritage in a Land Haunted by Famine Under Mao.”

“If you attack China, you’re going to die” is the message the parade sent, and the US needs to “get a grip” moving forward with how Washington handles Beijing, Ross said.

“The idea that the United States is in a position to economically defeat China is … a complete inaccuracy. It’s leading the United States to make errors which will rebound on itself,” Woodward warned, echoing Ross’ thoughts.

While there is the argument that there should have been a “cultural” parade rather than the military parade, Ross expressed that after China was invaded “for a hundred years” by British, European and Japanese powers prior to forming the People’s Republic in 1949, the PLA symbolizes “the Chinese people will be able to determine their own future” and will “not be invaded.”

As for the shooting, Woodward said that “to a certain extent, there has been a build-up to today, with a big provocation planned to coincide with the 70th anniversary” that was “aided and abetted by the West.”

In her opinion, outside powers wanted to create something that would “ensure celebrations were overshadowed by violent protests - preferably a situation in which someone was shot and killed.”

“There’s an indication of the fact that the media [in the West] wants to present the most escalated fashion in order for this story to dominate,” she added, also pointing out how Western media reported that the teen was struck in the chest by a bullet, while the official emergency report detailed that the 18-year-old sustained a non-fatal gunshot wound to the shoulder.

Ross, in agreement with Woodward, went on add perspective to the situation, concluding that “if a black person in the United States picked up a Molotov cocktail and aimed at a US cop, they’d be dead - immediately.”