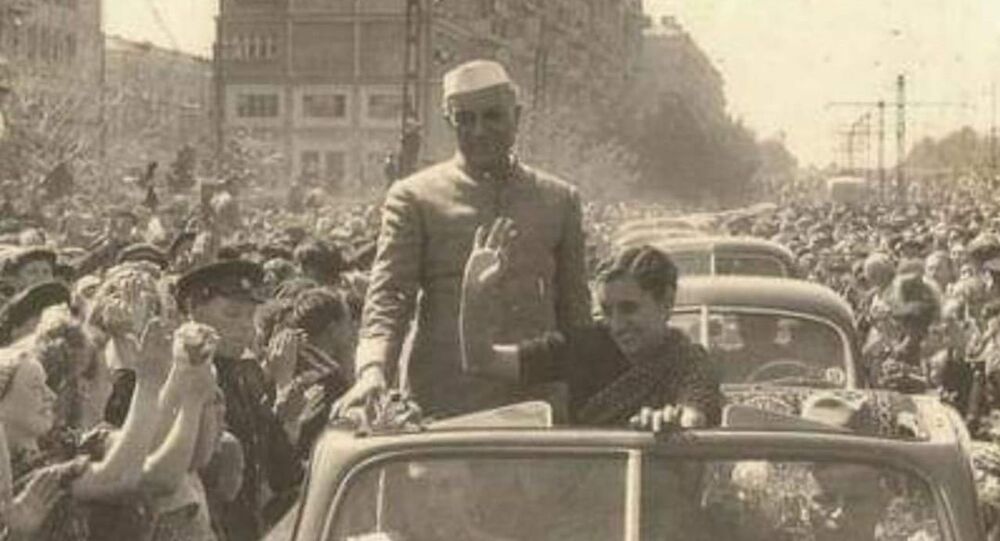 New Delhi (Sputnik): Senior Congress leader and former Indian representative at the UN Shashi Tharoor has been called out on Twitter after posting an archived picture from former Prime Minister Jawaharlal Nehru’s visit to the former USSR but captioning it as a visit to the US.

Shashi Tharoor took to Twitter to share the image of former prime ministers of India, Jawaharlal Nehru and Indira Gandhi, waving to a huge crowd with the claim that the picture was taken during their visit to the US in 1954. However, it was in reality an image of Nehru’s official visit to the city of Magnitogorsk in the Soviet Union in 1955.

Not only did he share it with a misleading caption but he also misspelled the name of the late Indira Gandhi as “India”.

Tharoor’s mistake led to Moscow and the USSR trending on Twitter in India with 34,000 and 15,000 respective mentions at the time of publication.

Nehru & India Gandhi in the US in 1954. Look at the hugely enthusiastic spontaneous turnout of the American public, without any special PR campaign, NRI crowd management or hyped-up media publicity. pic.twitter.com/aLovXvCyRz

It was soon discovered to be an image of Nehru’s Soviet-era trip in 1955 when his daughter Indira Gandhi accompanied him.

Tharoor subsequently shared another post on Twitter saying: “I am told this picture (forwarded to me) probably is from a visit to the USSR and not the US. Even if so, it still doesn't alter the message: the fact is that former PMs also enjoyed popularity abroad…”

I am told this picture (forwarded to me) probably is from a visit to the USSR and not the US. Even if so, it still doesn't alter the message: the fact is that former PMs also enjoyed popularity abroad. When @narendramodi is honoured, @PMOIndia is honoured; respect is for India. https://t.co/9KQMcR0zTD

However, his clarification didn’t stop netizens from sharing hilarious memes.

Nehru with Harrison Ford in Indiana Jones and the Temple of Doom pic.twitter.com/3OC0dGBESR

Others including journalists entered the fray and took a dig at Tharoor.

It certainly is Moscow. But you also know, Jaggi, that its hardly arranged

That is Moscow 1956. Totally arranged adulation

Always advisable to do a reverse image check. This is Moscow 1956, and there were never any spontaneous receptions in the erstwhile Soviet Union. The State sponsored welcome was given because Congress had decided to go into the Socialist fold in its AICC session at Avadi. https://t.co/2P7loj1kf5

I thought u were a well educated man. But it looks like you have lost ur brains doing Nehru-Indira-Sonia slavery.

If u dnt do crowd management for leaders like Modi/Trump/Puttin, top leaders of the world, itz gonna be a huge mess, what u saw for Nehru is just a peanut though..🤣

Well..
Your Bamboozled photo can be justified, bcz the party U belong would appreciate ur work..!!

Interesting part is-
What Enraptured the people of USSR to welcome these Nehru 's in their country..?

Looks Baffling.. isn't it..?
- May be #TheTashkentFiles is the answer..!? pic.twitter.com/JGmmvLKGg3

Tharoor is widely respected not just as a former UN envoy but as a scholar with an enviable command of diction.

He had actually tweeted to downplay Prime Minister Narendra Modi’s massive reception in the US by the Indian diaspora. He said there were others like former prime ministers Nehru and Indira who also enjoyed similar mass appeal abroad even without any “public relation campaign or media publicity.”

As he represents India’s opposition party Congress, Tharoor’s tweet was perceived by many as a bid to undermine the recently held “Howdy Modi” event. It was held in the US city of Houston on 22 September which witnessed US President Donald Trump and Modi being greeted by about 50,000 members of the Indian diaspora.