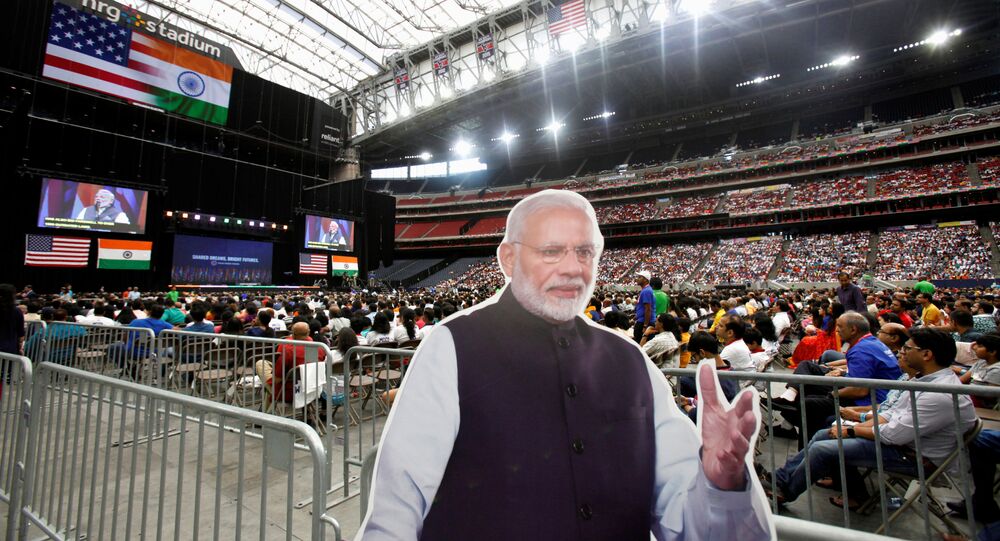 New Delhi (Sputnik): The goodwill marking the “Howdy Modi” event in America’s Houston city on Sunday has indicated a softening of positions by India and the US on trade issues, but this needs to be backed up realism, an Indian analyst said on Monday.

The “’Howdy, Modi!’ – Shared Dreams Bright Futures" rally at the NRG Stadium in Houston, Texas, the fourth-largest city in the United States, saw the Indian American community listening attentively to addresses made by both Prime Minister Narendra Modi and US President Donald Trump on Sunday.

Representatives from 48 US states were present in the jam-packed stadium. The live audience was the largest ever gathering for an invited foreign leader visiting the United States, other than the Pope, according to the organisers of the event, and it was the first time an American President had addressed such a huge Indian-American audience.

The India-US bilateral narrative has been affected by tensions on the trade front, said Kashish Parpiani, Research Fellow at the Observer Research Foundation, an Indian think tank.

However, events taking place between Washington and New Delhi in September indicate that both countries are looking for middle-of-the-road solutions, Parpiani said in an interview with Sputnik.

Sputnik: If we were to make an assessment of the "Howdy Modi" event in Houston, how would you rate it in terms of impact on the US-India relationship?

Kashish Parpiani: The real impact will be assessed in the much anticipated "early harvest" partial trade deal expected to be announced this week. A mutually beneficial partial trade deal focused on middle-of-the-road solutions to the pressing trade issues between the US and India would be the real testament of the chemistry developed between Modi and Trump.

Sputnik: Can India bring back the best in terms of trade deals/agreements and develop a better understanding in the wake of the bonhomie after the "Howdy Modi" event?

Kashish Parpiani: Certainly, I hope is the chemistry on display at the 'Howdy, Modi!' rally can be converted to dampening some of the hardened stances by both parties on trade issues.

Sputnik: Many would say that the "Howdy Modi" event is again a case of only talk and no substance. Do you agree both India and the US have had serious trade differences since June 2018?

Kashish Parpiani: It would not be prudent to see the 'Howdy, Modi!' in isolation. A lot of the meetings where the rubber meets the road, metaphorically speaking, will occur through the week on the sidelines of the UN. Moreover, the event in Houston also bore major signals as to the future trajectory of the US-India dynamic. For instance, Trump emphatically announced the Tiger Triumph exercise, the first-ever tri-service exercise between the US and India.

Sputnik: There is also a view that realpolitik is involved in bringing Trump and Modi on one stage in Houston. Trump seems to have locked his sights on both the sizeable and influential Indian-American community as well as the Texas vote. Would you agree?

Kashish Parpiani: Certainly, President Trump's political arithmetic on Indian Americans was a key factor behind his attendance at the 'Howdy, Modi ' rally. In anticipating an across-the-board decline in white women voters, and the risk of new battleground states like Texas flipping blue, President Trump seems to be on the lookout for supplementary voter bases to offset those losses. In this context, considering that the Texan towns of Dallas and Houston are home to over 270,000 Indian Americans, his decision to join the ‘Howdy Modi!’ rally on 22 September in Houston stands as an election arithmetic no-brainer.

Sputnik: American energy companies while praising India for taking steps for ease of doing business do still believe that much more needs to be done to ensure a level-playing field in a sizeable market like India. Do you agree or disagree with this view?

Kashish Parpiani: Going forward, US-India energy ties are going to be the key realm to focus on. The Modi government has made no secret of its aim to develop India into a gas-based economy, with natural gas being projected to double its share of the nation's energy mix by 2030. And towards that aspiration, the US has found a point of convergence.

Another testament to the same is that India was the fifth largest importer of American liquified natural gas last year.

Furthermore, the surge in the importance of energy trade in the broader dynamic of US-India relations was apparent with last year's initiation of the India-US Strategic Energy Partnership under which four working groups have been set up to develop ties on themes of oil and gas, power and energy efficiency, renewable energy, and sustainable development.