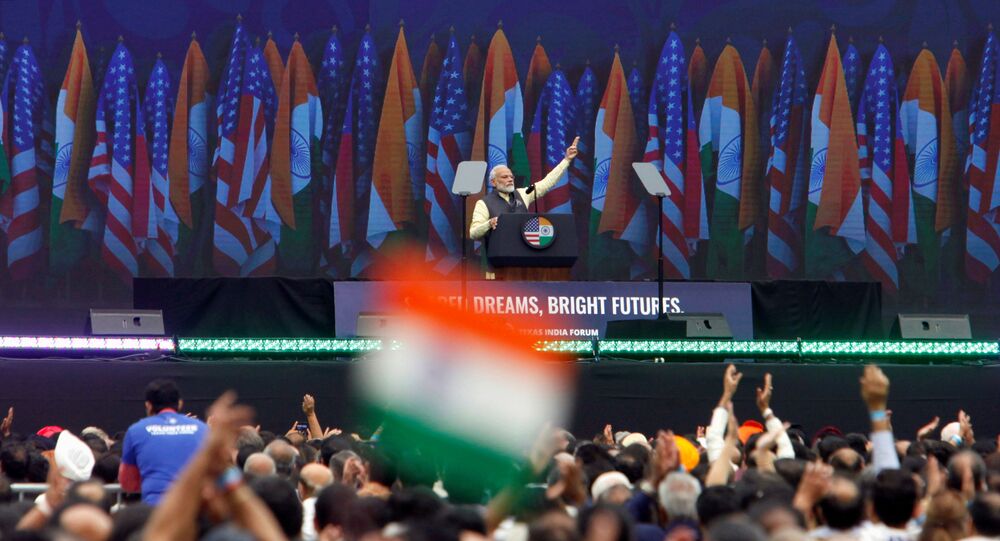 New Delhi (Sputnik) - The event which was called a "profoundly historic event" by US President Donald Trump, was billed as the largest-ever reception for a foreign leader in the US.

As a sea of Indian-Americans came together at the “Howdy Modi” event in Houston, the sense of excitement engendered by Prime Minister Narendra Modi’s visit to the US left Bollywood circles buzzing, with many calling him a “Rockstar”.

The event saw 400 performers showcasing various their various talents before Modi and US President Trump took to the stage.

Bollywood superstars like Salman Khan, Akshay Kumar, and veterans like Anupam Kher, Rishi Kapoor and many others in took to twitter to laud the prime minister's growing friendship with Trump.

Salman Khan, who often shies away from publicly sharing his views, amused many by hailing Modi.

Sharing the picture of Modi and Trump addressing crowd from the stage, Actor Anil Kapoor called it a spectacular display of statesmanship.

Pakistani-origin Singer Adnan Sami, called it a F*** You moment.

​The event was hosted by the Texas India Forum. The live audience in the stadium was the largest-ever gathering for an invited foreign leader visiting the US, other than the Pope, according to the organisers.

It was the first time an American President had addressed such a large Indian-American audience.