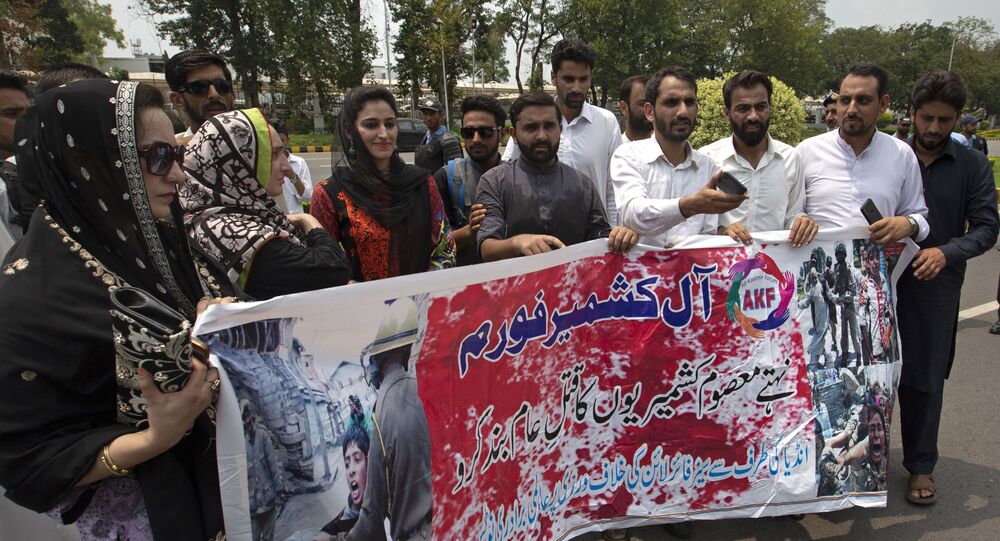 MOSCOW (Sputnik) - Pakistan has all necessary security provisions in place and is ready to ensure the protection of its people in Kashmir, Pakistani Armed Forces spokesman Asif Ghafoor said on Monday amid growing diplomatic escalation around the disputed region.

Earlier in the day, the Pakistani Foreign Ministry said that Islamabad would use "all possible options" to counter what it considers India's illegal decision to revoke the special status of Jammu and Kashmir state in the Indian part of Kashmir and put it under the direct control of the federal government.

"Pakistan has all its safeguards in place. Pakistan shall take all necessary measures and continue to stand firmly with just cause of oppressed people of India-occupied Jammu and Kashmir to get their right to self-determination as per UNSC resolutions," Ghafoor said when asked whether Pakistan plans to boost its military presence in Kashmir and whether "all possible options" included the military one.

Since 1947, the territory of Jammu and Kashmir has held a special status under Article 370 of the Indian constitution, which gave it its own constitution and decision-making rights in all areas except for defence, foreign affairs and communications.

On Monday, Article 370 was revoked by a presidential decree. On Monday, the Indian parliament's upper house voted 125-61, with one abstention, for the bifurcation of the state of Jammu and Kashmir. The bill is yet to also be approved by the lower house.

If passed, the decision will bring about a major administrative restructuring of Jammu and Kashmir. The Indian government considers splitting it into two union territories neither of which will have its own legislature and both of them under direct federal control.

Shortly after announcing the decision on Jammu and Kashmir, New Delhi sent additional 8,000 troops in addition to a contingent of more than 35,000 already deployed there.

On Saturday, Pakistan accused India of using cluster munitions to kill civilians along the line of control separating the Pakistani and Indian parts of Kashmir. According to Islamabad, at least two civilians were killed and 11 more seriously injured in the attack. The accusations were voiced one day after New Delhi announced decision to significantly boost its forces in the region.