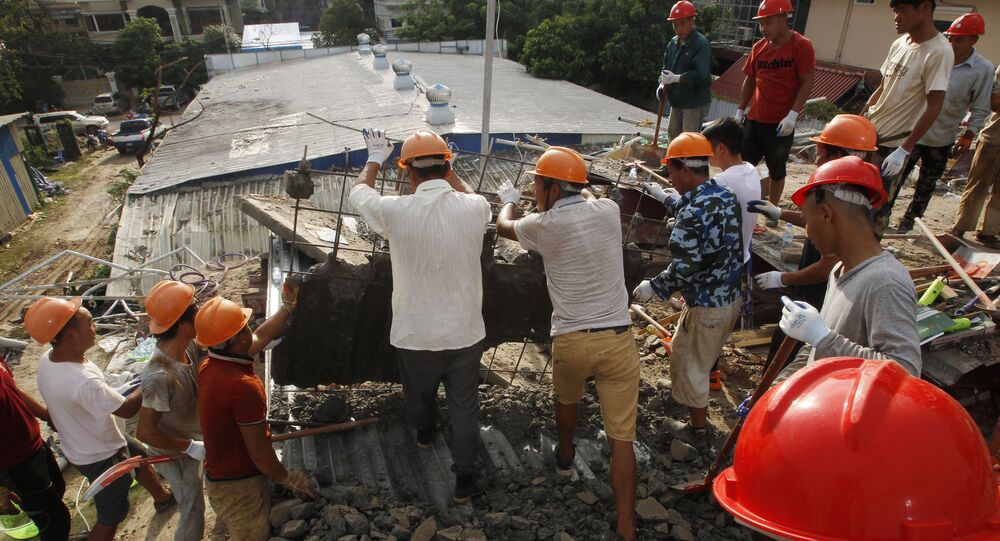 MOSCOW (Sputnik) - The number of people dead in Saturday's collapse of a building under construction in Cambodia’s southern Sihanoukville province has increased from 17 to 24. As many as 24 others were injured, according to the Khmer Times newspaper.

Death toll hits 19 in the collapse of a Chinese-owned building under construction in a Cambodian coastal Sihanoukville. pic.twitter.com/sQ1dltMh2M

The collapsed building reportedly belonged to a Chinese national who was renting the land from a Cambodian owner.

The rain keeps falling down while the rescue operation coninues on the second day the collapse of a Chinese owned building in Preah Sihanouk Province.#BuildingCollapse #Sihanoukville #PrayforSihanoukville #Cambodia #ThmeyThmey @ThmeythmeyInt pic.twitter.com/fH9YI7F6lS

Provincial governor Yun Min said, cited by the media, that the owner of the building had been warned about grave problems at the site and had been ordered to cease construction. Earlier Min said that 40-50 workers were supposedly inside the building when it collapsed.

The collapse of a 7-storey building under construction in Sihanoukville Province, southern Cambodia was suddenly collapsed completely, having buried 13 people dead in the rubble. It angered thousands of Cambodians because the Chinese built a pillars but had no steel inside pic.twitter.com/msFr1XNQRF

One Cambodian and three Chinese nationals, linked to selling or leasing the building, have been arrested, police said.