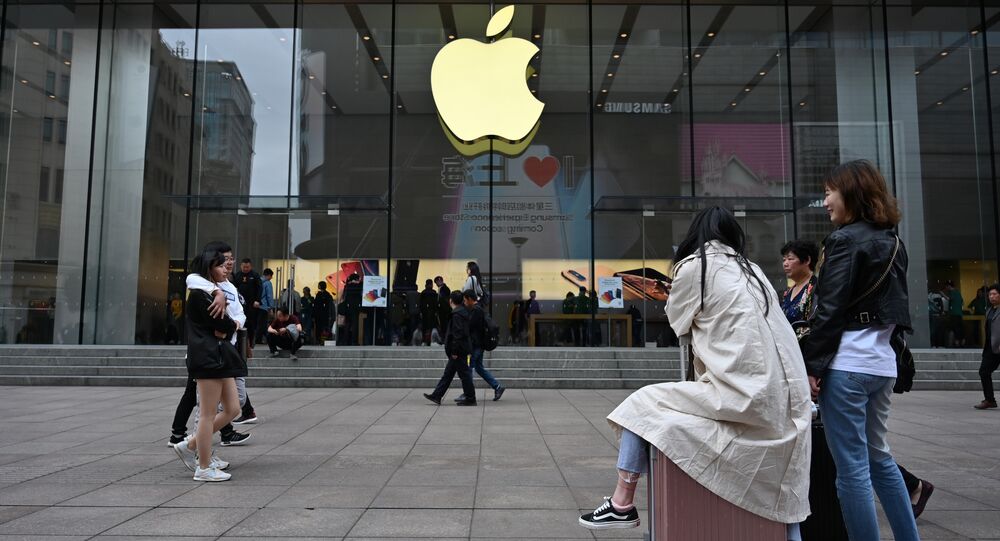 Washington has recently added the Chinese tech giant to a list of companies banned from obtaining hardware, software, and technologies from the US amid an ongoing trade war between the countries and the White House's battle against the use of Huawei's 5G equipment in Europe.

Swiss multinational investment bank UBS has spread notice among its clients warning that Apple's performance in China could be threatened by patriotic sentiments among its citizens in light of the ongoing trade war between Washington and Beijing, Business Insider reported.

"At times, foreign consumer goods have been negatively impacted in China by nationalist sentiment. This could have been a factor regarding Apple iPhone's poorer performance in China in 4Q18. Whilst hard to quantify, we do view this as a risk for Apple and the supply chain", the UBS notice read.

According to the South China Morning Post, the Cupertino-based tech giant's share of the Chinese market has dropped from 9.1% to 7% in the first quarter of 2019, while its rival, Huawei, has gained around 3%. Although the shift can't solely be attributed to the hostile US moves against Chinese firms and the country's economy in general, the newspaper indicates that this has definitely impacted the preferences of regular users.

The media outlet brings up the example of two hard-core iPhone fans, Wang Zhixin and Sam Li, who recently decided to ditch their Apple devices in favour of Huawei, partially due to sympathy towards the firm being form their homeland.

"There is a calling from my heart that I need to show support for Chinese brands, especially in the trade war climate", Wang said.

Hu Xijin, editor-in-chief of Global Times newspaper, also bought a Huawei phone to support a company "unreasonably suppressed" by the US, but still kept his iPhone as a supplementary device.

© CC0
Microsoft Joins Google's Crackdown on Huawei Amid US Blacklisting

Washington has also undertaken a number of steps to undermine Huawei and other Chinese tech firms' positions in the US. Namely, the White House has banned the use of their smartphones on US military bases and prohibited American firms from using their telecom equipment.

In the most recent move, the US government banned American firms from providing technologies, hardware, and software to around 70 Chinese companies, including Huawei. This led to Google ceasing Android support on all future Huawei devices. The Chinese tech giant promised to initiate a legal proceeding against the American tech giant in response. The ban also reportedly cut off the Chinese firm from US-based chip producers, such as Intel, Qualcomm, Xilinx, and Broadcom.

According to a Bloomberg report, Huawei was expecting such move and prepared a "Plan B" to replace chip deliveries and continue its operations despite the US measures.