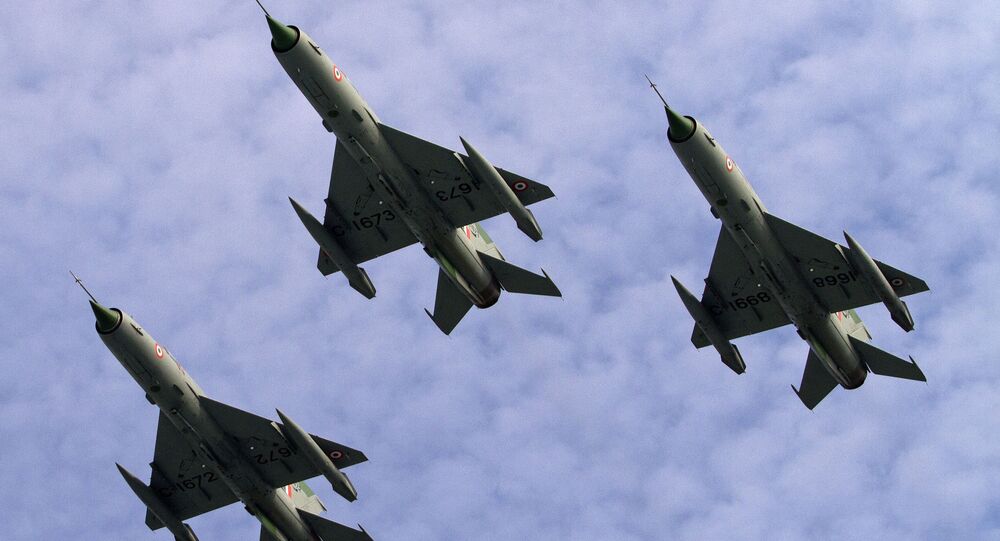 Tensions between India and Pakistan have been running high following Indian air strikes which apparently targeted terrorist infrastructure on the Pakistani side of the border in Kashmir. Islamabad swiftly described this operation as a violation of its sovereignty and territorial integrity.

An Indian Air Force (IAF) MiG-21 has crashed outside the city of Bikaner, India, about 100 km from the Pakistani border, during a "routine mission," the Indian military has confirmed.

The single-seater plane's pilot is reported safe, having successfully ejected.

The IAF issued an official statement, which reads as follows: "[This] afternoon a MiG-21 aircraft on a routine mission crashed after getting airborne from Nal [Air Base] near Bikaner. Pilot of the aircraft ejected safely. A CoI will investigate the cause of the accident."

The reason for the crash is yet to be established, although one defence official suggested it may have been the result of a bird strike.

Unconfirmed photos from the scene show what appear to be the plane's remains, surrounded by onlookers and a fire brigade.

Today afternoon a MiG-21 on a routine mission crashed after getting airborne from Nal near Bikaner. Initial inputs indicate likely cause as bird hit after take off. Pilot of the aircraft ejected safely. | @rajatpTOI @writetake @TOIBengaluru @nandibull @tinucherian @JaunetGurudas pic.twitter.com/hJfKoMzkTu

#MiG21 aircraft on a routine mission crashed after getting airborne from Nal airport near #Bikaner Pilot of the aircraft ejected safely pic.twitter.com/azDnja3cdH

The MiG-21 is a legacy fighter first introduced into the Soviet Air Force in 1959, and exported to dozens of countries around the world in the following years. The Indian Air Force has upgraded versions of the plane, known as the MiG-21bis, which were produced until 1985, and which are expected to be retired in the early 2020s.

Tensions between New Delhi and Islamabad escalated last week after India carried out air strikes to destroy an alleged terror camp inside Pakistan said to belong to al-Qaeda* affiliated militants who claimed responsibility for a deadly terror attack on Indian paramilitary forces in Kashmir in mid-February which killed over 40. The Indian government has charged Pakistan with not doing enough to combat terrorist activity on its territory. Pakistani officials have rejected the charges, and called the Indian airstrikes a violation of Pakistan's airspace and a threat to its sovereignty.

Following the initial strikes, dogfights broke out between Indian and Pakistani aircraft, leading to the loss of at least one MiG-21 aircraft. The Indian military also insists that it shot down a Pakistani F-16, although Pakistan denies the claim. The spike in tensions has also led to a rise in violence on the Line of Control between Indian and Pakistani forces in the contested region of Kashmir, with forces exchanging heavy fire across the border region.

Indian Jr. Foreign Minister: Opposition Must Be ‘Tied Under Jets’ to See Targets