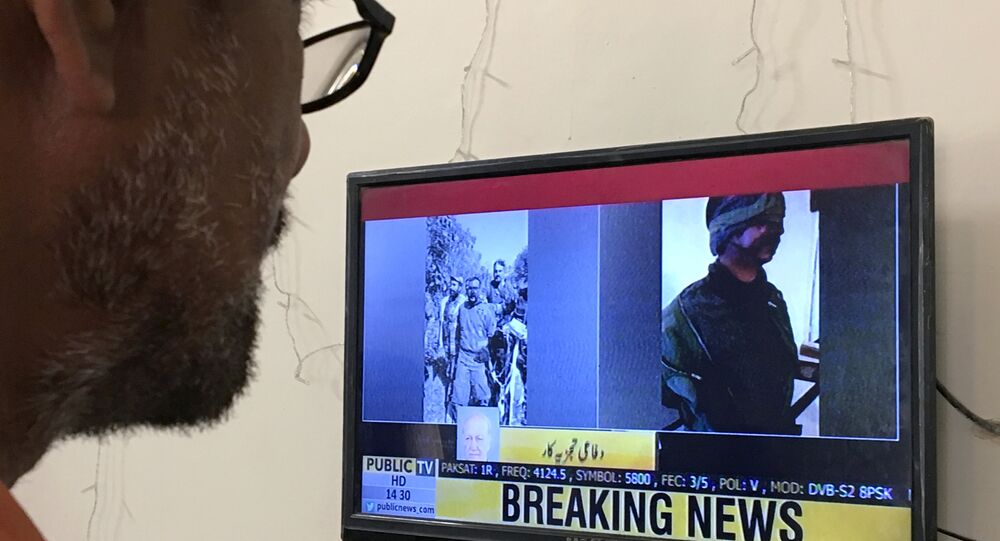 India on Wednesday had called upon Pakistan to immediately release and return the Indian MiG-21 fighter jet pilot who was arrested by the Pakistan Army after being shot down by Pakistan's air defence. The pilot landed in the Pakistan-administered part of Kashmir after his plane was hit and he ejected.

New Delhi (Sputnik): Pakistan's Foreign Office spokesperson Dr. Muhammad Faisal, on Thursday, said that the decision regarding the fate of Indian pilot held captive by the Pakistan army will be decided in a couple of days.

"India has raised the matter of the pilot with us. We'll decide in a couple of days what convention will apply to him and whether to give him Prisoner of War status or not," Dr. Faisal was quoted as saying by the media.

Pakistan's foreign ministry has also confirmed that it received the Indian dossier handed over to the Acting High Commissioner by India's Ministry of External Affairs on Wednesday.

"It will be examined and if actionable evidence is found, we are ready to take action," Dr. Faisal added.

India Will Not Bargain Over Captive Fighter Pilot — Foreign Ministry

India will not let Pakistan use the captive Indian Air Force (IAF) fighter pilot as a bargaining chip, insisting that he has to be returned to India unconditionally, Ministry of External Affairs (MEA) officials told the media in New Delhi on Thursday.

"He has to be returned immediately. There is no question of a deal. No question of negotiation. If Pakistan is under the assumption, that they have a card, we would like to disabuse," the MEA officials stressed.

© REUTERS / Mukesh Gupta
Pakistan and India Exchange Fire in Kashmir - Indian Defence Ministry
The officials said that India is not asking for consular access but safe return. IAF Wing Commander Abhinandan Varthaman was detained by the Pakistan Army on Wednesday when, during an aerial engagement, his MiG 21 Bison was shot down by the Pakistani fighter planes.

Officials further added that Pakistan has informed foreign diplomats in Islamabad that India is going to launch missile strikes in an apparent attempt to create war psychosis.

"It is an attempt to create war psychosis. We are countering this war psychosis of Pakistan. India took no actions to escalate the situation on Wednesday. We would like credible, verifiable action against Jaish-e-Mohammed before India will respond to Pakistan's Prime Minister Imran Khan offer of talks," the official stated.

Welcoming the statement made by the US President Donald Trump, an official added that they were not sure what US president meant when he said that good news is soon to come.

"If he [Trump] is referring to India's restraint, we would appreciate his position," he said.

On Wednesday, India handed over the dossier to the acting high commissioner of Pakistan Syed Haider Shah, who was summoned by the Ministry of External Affairs wherein it provided the details of terror group Jaish-e-Mohammed's role in the Pulwama attack that killed at least 40 Indian soldiers on 14 February.

© REUTERS / Jorge Silva
Trump Says US Was Involved in Mediating Indian-Pakistani Conflict
On Wednesday, the Indian Foreign Ministry said a Pakistani jet was shot down in the aerial incident over the disputed Kashmir region, adding that India also lost one Mig-21 aircraft. The Pakistani army said it had downed two Indian jets that crossed the so-called Line of Control (LoC) separating the Indian-and Pakistani-controlled parts of Jammu and Kashmir and arrested two pilots. The injured one was sent to a hospital and receiving necessary medical help, while the other pilot is in custody, according to the Pakistani military.

On Tuesday, the Indian Air Force carried out an airstrike against a camp of Jaish-e-Mohammad group, considered terrorist by India, which was located across the LoC. The Pakistani Foreign Ministry has slammed the airstrike as a violation of its territorial integrity and sovereignty.