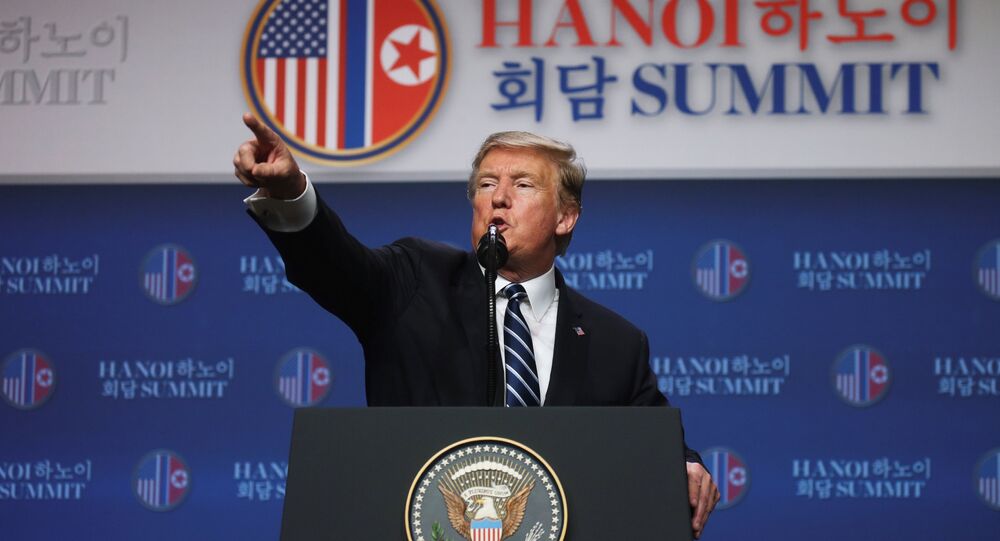 MOSCOW (Sputnik) - A Sputnik correspondent got a chance to ask US President Donald Trump a question at a Thursday’s press conference, following his summit with North Korea’s leader, which led to a barrage of comments from Western journalists.

The Sputnik correspondent asked whether Trump addressed the issue of possible inspections to North Korea's nuclear sites during his summit with Kim Jong-un.

Russian propaganda outlet Sputnik just asked Trump a question. Here’s some background on their operations in the states. https://t.co/JzcNvi2H19

The White House barred reporters from Bloomberg, Associated Press, the Los Angeles Times and Reuters from covering Kim and Trump’s dinner after two of them shouted questions at Trump at an earlier press conference.

"Trump seems super annoyed AND he was real rude to the Sputnik lady so omg haha something great is gonna go down," journalist Kate Hess said on Twitter.

The correspondent, however, did not feel any rudeness coming from the US president. Trump complained that he could not hear the question, so the Sputnik correspondent had to repeat twice both her question and what news outlet she is from.

The United States will be able to carry out inspections at North Korea's nuclear sites easily and successfully, US President Donald Trump said in response to Sputnik’s question.

A number of Western politicians, including those in the United States, the United Kingdom and France, have repeatedly accused Sputnik of spreading propaganda, albeit without providing any evidence. The linked 2017 article by the Yahoo News portal reported on alleged internal Sputnik documents that a former agency employee Andrew Feinberg claimed to have turned over to the FBI. The FBI reportedly questioned Feinberg as part of its investigation into whether Sputnik was acting as a tool of so-called Kremlin propaganda in violation of the US Foreign Agents Registration Act.

RIA Global LLC, the US company that produces content for the Sputnik news agency, Sputnik radio's partner Reston Translator as well as RT America, have since then had to register as "foreign agents" upon the demand of the US Justice Department.

Margarita Simonyan, the editor-in-chief of the Sputnik news agency, has called this demand discriminatory and contradictory to principles of democracy and freedom of speech, as it barred the outlets from equal competition with foreign broadcasters working in the United States and not registered as "foreign agents."

Kremlin spokesman Dmitry Peskov said, regarding the FBI investigation into Sputnik that questioning of journalists or former journalists over their work pointed to "serious problems with censorship and limiting the work of the press." Russian President Vladimir Putin has called the pressure on Russia-based media abroad unacceptable, according to Peskov.

Russian Foreign Ministry spokeswoman Maria Zakharova has said that Russian media face pressure in the United States aimed at squeezing them out of the US market over reporting facts that are inconvenient for Washington. Such attempts violate the US commitment to the freedom of the press, and Moscow will continue to closely monitor the developments around Russian media in the United States, the spokeswoman noted.