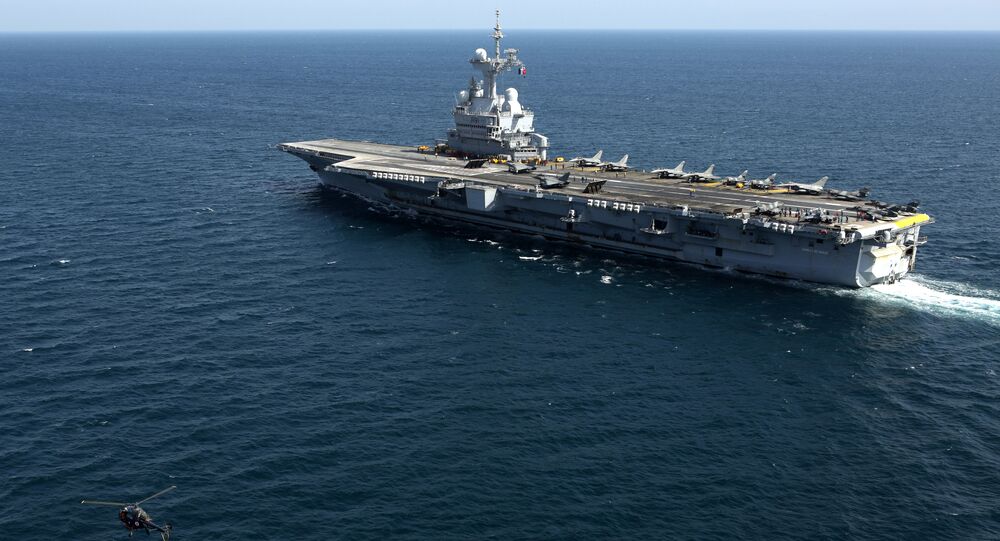 France’s only aircraft carrier, Charles de Gaulle, will soon deploy to the Indian Ocean, the French Ministry of Defense announced Friday. Paris hopes the move will solidify its influence in the region, although the waterway is very much France’s stomping ground, the country having numerous territories and bases in the area.

Beginning next month, the newly modernized Charles de Gaulle will deploy for five months to Reunion Island, off the east coast of Madagascar, with its battle group of three destroyers, a submarine and a supply ship, the Marine Nationale announced on Friday.

The 42,000-ton de Gaulle might be dwarfed by the United States' supercarriers, but it more resembles them than it does any other flattop on the seas. It's the only carrier not in use by the US to have a steam catapult system for launching aircraft and the only non-US carrier powered by nuclear reactors.

The French Navy plans to interact with several allies while at sea, including with ships from the Royal Navy, the Royal Danish Navy and the Portuguese navy, according to the Defense Ministry.

"American and Australian ships will also strengthen the carrier group throughout its mission," the Defense Ministry said. "This international dimension of the [Charles de Gaulle strike group] thus testifies to the high level of cooperation and trust between the Allied navies and our Navy."

© CC0
As Japan Goes All Out to Improve Ties With Beijing, India Fades Into the Background

"They still aspire to be a major player," Michael Shurkin, an analyst with the RAND think tank, told The National Interest. "Having a nuclear carrier really supports that ambition."

The deployment aims to "reaffirm France's presence in these areas" and "reinforce [its] assessment of the situation" in the Indo-Pacific region; "intervene to address regional security issues as appropriate"; develop its ability to cooperate with other militaries; and "strengthen strategic partnerships," according to a Friday statement by the Defense Ministry.

France "has always stood in the front line in defence of the inalienable right of freedom of navigation in international waters," French Defense Minister Florence Parly told La Provence newspaper in October. "Whenever there are infringements of this fundamental principle of international law, as is currently the case in southern China, we shall make a show of our freedom to act and sail in such waters."

Further, last May, French President Emmanuel Macron said during a trip to Australia that no one country could be allowed to dominate the region and called upon Australia and India to help France protect the region from Chinese "hegemony," AFP reported.

But France has done no less, solidifying its grasp of the Indian Ocean with a network of 16 military bases situated on its various overseas departments and territories in the region. Its Exclusive Economic Zone encompasses 2.6 million square kilometers, Asia Times noted.

The Charles de Gaulle launched in 1994 and is named after French General Charles de Gaulle, who led the Free French Forces during World War II and later served as the country's president following a 1958 coup d'etat. He gave birth to a philosophy of French nationalism, autonomy and realpolitik called "Gaullism."

The United Kingdom has also announced that it will send its newly minted aircraft carrier, the HMS Queen Elizabeth, to the Pacific Ocean in 2021. Further, China's two aircraft carriers, Liaoning and the as-yet-unnamed Type 001A, still in trials, will be performing joint training exercises next week in the Yellow Sea. Also, the US Navy announced Wednesday it would be retiring the Nimitz-class carrier USS Harry Truman 25 years ahead of schedule, dropping the ship from the fleet in 2024.