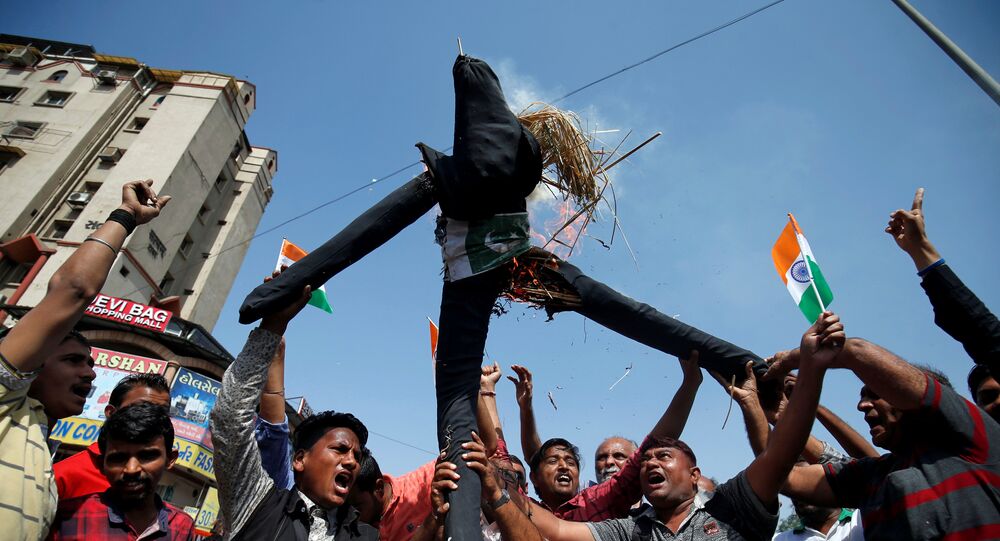 MOSCOW (Sputnik) - Indian Air Force carried out on Tuesday an airstrike against a 'terror camp' located across the Line of Control (LoC) separating the Indian- and Pakistani-controlled parts of the disputed Jammu and Kashmir region and completely destroyed the facility, Indian Minister of State for Agriculture Gajendra Singh Shekhawat said.

The Indian Foreign Ministry stated that the airstrike was carried out due to Pakistan's inability to take measures to destroy terrorist infrastructure.

"India has been repeatedly urging Pakistan to take action against the JeM to prevent jihadis from being trained and armed inside Pakistan," the ministry said in a statement.

"Credible intelligence was received that JeM was attempting another suicide terror attack in various parts of the country, and the fidayeen jihadis were being trained for this purpose. In the face of imminent danger, a preemptive strike became absolutely necessary," the statement added.

Pakistan Forces 'Ready to Respond to Any Misadventure'

According to his office, he vowed to "engage with global leadership to expose irresponsible Indian policy".

Earlier in the day, Spokesperson for the Pakistan Armed Forces Maj. Gen. Asif Ghafoor said that Indian aircraft had violated the Line of Control.

According to Ghafoor, the Indian aircraft released their payload near the northeastern Pakistani town of Balakot, located close to the Line of Control, but no damage or victims have been reported.

"Indian aircrafts intruded from Muzafarabad sector. Facing timely and effective response from Pakistan Air Force released payload in haste while escaping which fell near Balakot. No casualties or damage", the spokesperson said.

Separately, Pakistan's foreign minister stated that the country's forces are ready to respond to any misadventure.

Tensions Escalate in the Wake of Kashmir Attack

The relations between New Delhi and Islamabad have been increasingly tense after the deadly terrorist attack on 14 February, when a car carrying over 100 pounds of explosives detonated on the Jammu-Srinagar highway next to a security convoy, killing 45 Indian paramilitary officers.

© REUTERS / Younis Khaliq
India Preparing Dossier to Expose Pakistan’s Role in Terror Attack - Sources
India blamed Pakistan for harbouring and protecting terrorists, accusing the country of having a "direct hand" in the incident.

Pakistan in turn rejected the allegations of its involvement in the attack and said that this was New Delhi's strategy to divert international attention from human rights violations taking place in the Kashmir region.

Both India and Pakistan along with China have been contesting Kashmir since 1947. The state is currently divided between the three sides, with Line of Control serving as a de facto border between the Indian and the Pakistani-controlled parts of Kashmir.

Pompeo: Pakistan Must Not Provide Safe Havens for Terrorists After Kashmir Blast