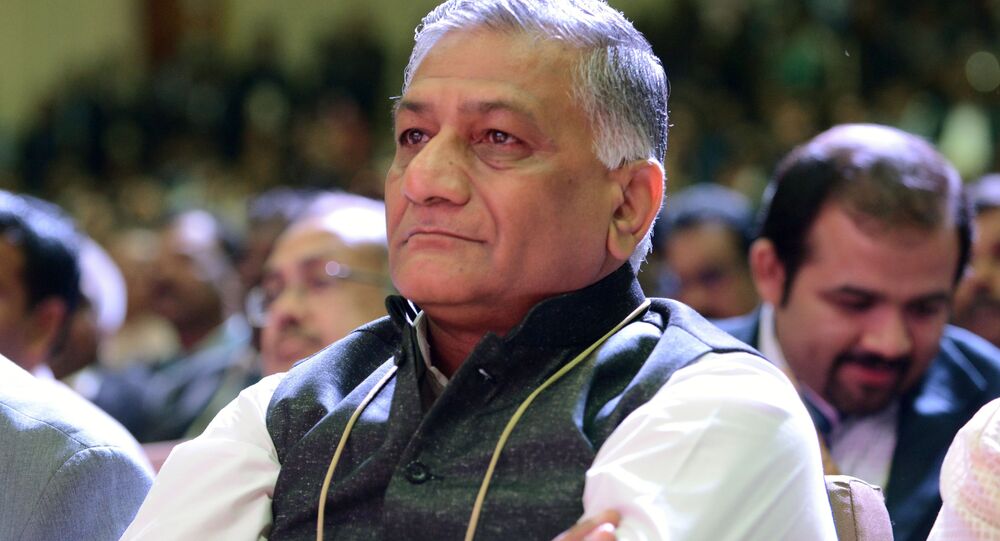 No Plans to Curtail Engagements with Russia - Indian Foreign Ministry

Reiterating that India does not recognize sanctions imposed by entities other than the United Nations, India’s Foreign Ministry has indicated that the country is very much firm on continuing engagements with Russia on a wide range of diverse sectors, including technology and energy.

New Delhi (Sputnik): India's Minister of State for External Affairs, V. K. Singh has categorically said that India does not accept sanctions enforced by entities other than the United Nations (UN).

"India upholds sanctions mandated by the United Nations Security Council and does not accept any unilateral sanctions," Foreign Minister V. K. Singh said in reply to a question posed by Member of Parliament Konda Vishweshwar Reddy.

© CC0
US Sanctions Will Not Affect Russia-Iran Railway Cooperation - Iran Railways VP
Konda Vishweshwar Reddy had sought information about India's plans in the near future with Russia and how the Indian government plans to cope with US sanctions.

"India and Russia discuss all trade and economic issues of mutual interest under the umbrella of India-Russia Inter-Governmental Commission on trade, economic, scientific, technological and cultural cooperation (IRIGC-TEC). There are a number of working groups under IRIGC-TEC covering diverse areas including modernization and industrial cooperation, priority investment projects, information and communication technology, energy and energy efficiency, as well as banking and financial matters," Minister of State for External Affairs V. K. Singh informed Parliament.

"During IRIGC-TEC meeting in December 2017, the two sides decided to raise the level of the joint working group on trade and economic cooperation to that of Deputy Minister/ Commerce Secretary and to create a mechanism to discuss and remove barriers to trade, if any. Joint working groups on agriculture and pharmaceutical too were created. To promote inbound investment from Russia to India, a single-window outreach and facilitation mechanism under the name ‘Russia Plus' has been created in ‘Invest India.' To boost connectivity and trade, the two sides are in regular touch to operationalize and popularize an International North-South Transport Corridor," V K Singh added.

The Foreign Minister further said that during the informal summit between Prime Minister Narendra Modi and President Vladimir Putin in Sochi, the two leaders had agreed to institute a Strategic Economic Dialogue between NITI Aayog of India and the Ministry of Economic Development of the Russian Federation, to identify greater synergy in trade and investment.

The Foreign Minister also indicated that India had no plans to curtail cooperation in the energy sector with Russia.

"In this regard, we welcome the arrival of the first consignment of LNG under a long-term agreement between Gazprom and GAIL from June 2018," the junior minister for external affairs added.