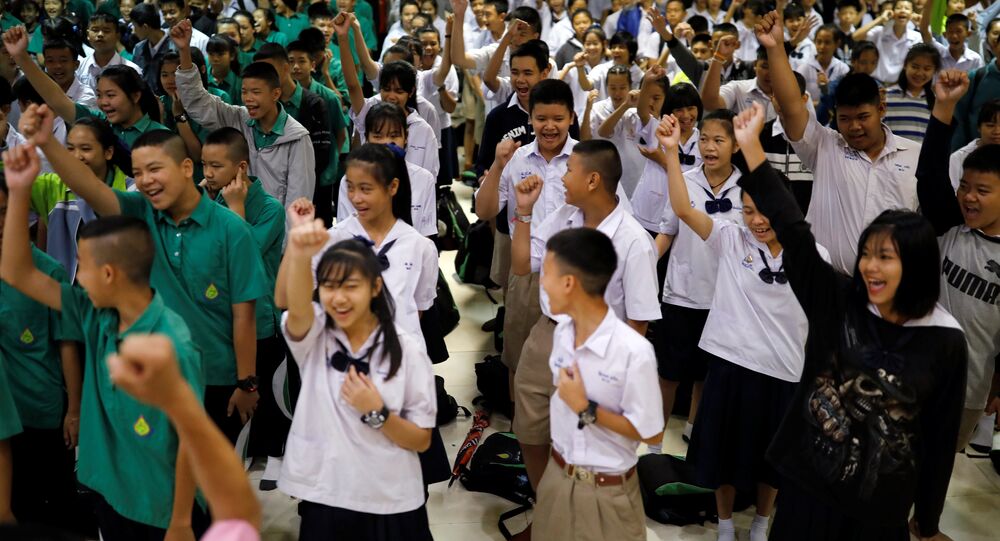 Twelve boys who were rescued from a cave complex in a remote corner of Thailand have been reunited with their families. Sputnik looks at the role of their coach, who was originally blamed on social media for leading them into the caves.

It has since emerged the boys actually entered the caves on their own and Ekkapol Chantawong, 25, went in to look for them and then managed to keep up their spirits during their 17-day ordeal.

Chantawong, a former Buddhist monk, taught the boys, who were aged between 11 and 16, how to meditate.

The fate of the boys, who were from a team known as the Wild Boars, has captured the world's attention and there are already plans to make a Hollywood movie about their ordeal.

This is Ekkapol Chantawong a former Buddhist Monk and the coach of the Thai boys. He kept the boys calm through meditation and alive by giving up his own rations, yet he has been vilified by so many around the world. pic.twitter.com/CQeZUCKv5A

​On June 23 heavy rain prevented the group from leaving the Tham Luang cave in Chiang Rai province and there were fears the boys would either drown or starve to death.

They were found alive by two British divers on July 2 — two miles inside the cave complex — and preparations were made to rescue them using specially trained divers.

Tragedy struck on July 6 when Saman Kunan, a former sergeant in the Thai Navy, died after his oxygen ran out underwater.

But on Tuesday, July 10, the operation to rescue them was successfully completed by Thai Royal Navy Seals.

Originally many people on social media around the world assumed Coach Ek, as he is known, had been responsible for getting the boys into such a predicament.

This victory goes to the heroes of the day, well done boys, you are so strong 🙏🏾 #thaicaverescue #chiangrai pic.twitter.com/05wysCSuVy

​That was the narrative which the parents believed but on July 7 they wrote a letter to Coach Ek which was given to the divers who were trying to arrange a rescue.

"From all the parents, please take care of all the children. Don't blame yourself," it said.

He wrote a note apologizing to the parents and promising to take "the very best care of the kids."

Only now has it emerged that the boys went into the caves on their own and he went in to look for them and managed to keep them alive while awaiting rescue.

It has also emerged that Coach Ek is a stateless person — one of 480,000 the UNHCR says are living in Thailand.

Amazing news that all of the Thai kids are out of the cave safely! I'd like to send out shirts to them! Is there anyone who can help with an address? @England pic.twitter.com/pQYwW4SPh7

​Many are from nomadic hill tribes and other ethnic groups who have for centuries lived around Mae Sai, the heart of the "Golden Triangle" — an area of Thailand, Myanmar, Laos and China which is often used to produce opium, the raw material for heroin.

The rescue of the Wild Boars squad has been greeted with joy around the world.

Several World Cup footballers have mentioned it on social media.

In the U.S., Coach Ek would likely be facing a lawsuit, or even charges. Here, he is seen as almost divine, a hero who was meant to be their with the kids through the ordeal. Here's a viral cartoon showing him as the protector of (very cute) little boars pic.twitter.com/nHl6QaxlpN

​There was even talk the Wild Boars would be special guests at the World Cup final in Moscow on Sunday, July 15.

But FIFA said the boys were recovering in hospital and would not be well enough to travel to Moscow.

"FIFA's priority remains the health of everyone involved in the operation and we will look into finding a new opportunity to invite the boys to a FIFA event to share with them a moment of communion and celebration," a spokesman said.